If it was any other weekend, a car hire company’s plan to run a cocktail bar might not have faced objections from Sussex Police.

But the police made their objections clear at a Brighton and Hove City Council licensing panel hearing today (Monday 16 July).

They objected to two temporary events planned for the Pride weekend at the start of August by Strafford Car and Van Hire.

The business, based under the viaduct in Preston Road, has plans for a VIP cocktail bar with jazz and a second area with dance music under one of the arches.

Combined, the two ticketed events would have a capacity for 900 visitors plus staff.

Concerns were raised about security, escape and fire plans, as well as crowds gathering around the entrance.

Sussex Police licensing officer Mark Thorogood told the panel hearing at Hove Town Hall: “If we were looking at any other weekend of the year, we would not call for a hearing.

“For any other weekend, we would have the resources to manage any issues.

“Pride is different. It affects all of Brighton and Hove and the city doubles in size in terms of people.

“Pride pay a significant amount of money for our policing.”

He pointed out policing for Pride is planned in minute detail with officers brought in from other forces to help.

Licensing consultant Steve Wright, for car hire business owner Stephen Strafford, told the panel that the application should be “considered in isolation”.

He said: “It must be considered on its own merits. 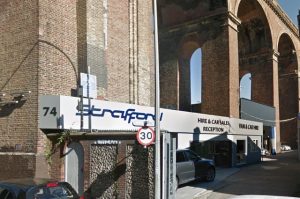 “This will be well managed. I am disappointed at the suggestion there will be issues.

“How can they say the premises will not do well when it hasn’t had the opportunity to do so.”

Mr Wright repeatedly underlined his point the event would be well managed and would meet the council’s licensing objectives.

Strafford’s managing director Fraser Strafford addressed concerns about crowds outside, saying that he had spent many Pride weekends at the business.

He said: “We’ve never had a point when we couldn’t leave.

“Even when the event goes past, the pavement is flowing with people.”

Labour councillor Mo Marsh, who chaired the panel, said that she led the parade at the top of a bus last year and had attended many Prides in the past.

She said: “People do not move. I headed the parade and had a brilliant view.

“I really took the opportunity last year to look on each side.”

Mr Thorogood said that the logistics of managing the site and Mr Strafford’s lack of experience running a licensed event was a concern.

Environmental health officers also objected to the potential noise, saying they were often called in to stop people playing music in the street along the Pride parade route.

The panel continued its discussions in private and said that it would inform all interested parties of its decision in writing.