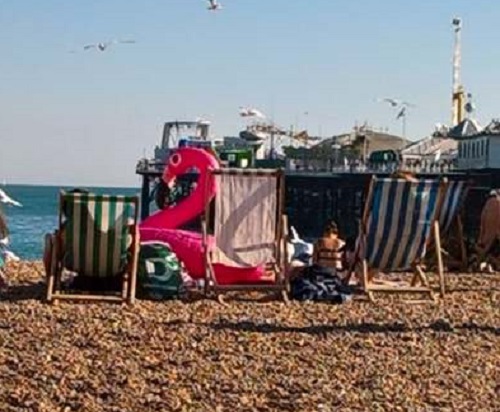 The flamingo rests on the beach following its sea rescue

Two women who drifted out to sea on a giant inflatable flamingo were towed back to Brighton beach yesterday afternoon.

Brighton’s seafront office was alerted to the pair’s plight at about 4pm yesterday, and launched their patrol boat to come to their aid.

The team has reissued a warning about how dangerous using large pool inflatables at sea is.

A spokeswoman said: “We would like to remind all beach users to always look for and swim on a lifeguard beach and speak to the guards before entering the water for on day advice.

“We would also like to remind the public that inflatable flamingos or any inflatables for that matter which are not designed for the sea should not be used in the sea.

“Off shore winds can blow you quickly away from land and out of your depth with no paddle to get back to land. On speaking to the lifeguards, they would inform of the wind direction and if your inflatable is suitable for open water.”

The seafront office, lifeguard team and boat have all been particularly busy over the last month as crowds of sunseekers flock to the beach, and have been out patrolling, giving out safety advice and reacting to incidents.

On Friday, the national RNLI Twitter account posted a video of a lifeboat retrieving a near-identical flamingo from the sea, saying there has been a spike in the number of people having to be rescued from a wide range of inflatables – ranging from unicorns, flamingos to inflatable boats.

The #TrumpBabyBlimp isn’t the only inflatable that’s been making waves recently. We’ve helped people drifting out to sea on blow up flamingos, unicorns and puffins! If you're planning to go to the beach with your inflatable this weekend, read this 👇 https://t.co/eGxqqig7bK pic.twitter.com/qKDDQ4Sl3R