Like many regular Brighton to London commuters, the rail breakdown on Monday 2 July will live long in my memory. I was angry at the time and I am almost as grumpy now having asked a series of written questions of the government and had platitudes and zero information in response.

It was the day when the morning journey to work took forever as the network couldn’t cope with a blockage caused by a failed train.

The only route to London was via London Bridge which caused over-full trains, overheated passengers and a two-hour journey. Passengers facing a return journey might have thought the blockage would have been cleared by the evening.

Like me, they would have been disappointed to turn up at Victoria and find news that the signals had failed between Wivelsfield and Hassocks.

The best piece of advice I could get from information services at Victoria station was whether I might benefit from taking off to Wetherspoons for a beer. We were all agreed I might.

But having turned up at Victoria at 8pm I didn’t get back into Brighton until 12.45am. The journey involved three different trains and multiple cancellations and advertised delays.

I accept that failures happen and that the Brighton main line is very busy. But when something goes wrong the whole system seizes up and that cannot be right.

The information for passengers was minimal, station staff often had contradictory stories to tell and the sense I had was that panic had set in as the system went into meltdown.

Worse, no one accepted any responsibility or took control of the situation. The best info I got came as a result of standing close to a group of unallocated drivers frustrated with not being able to get trains moving. They at least were getting emails giving them updates which they casually passed on.

I regularly ask annoying questions of the government’s ministers in the Lords – some oral, but mostly written – to try to glean a picture of what the government is or, most likely, is not doing. It is part of holding the government to account – part of the job of being a peer.

So the following day I asked five reasonable questions relating to the disruption. I tried to find out if the government estimated how many passengers were delayed, what they were going to do to review the provision of better info to passengers, what plans they had to improve services and review the relationship between Network Rail and the train operators and how much the massive service failure was going to cost in compensation.

I then waited for the replies. Apart from telling me that on the day 68 per cent of Southern services arrived within five minutes of schedule, I learnt nothing except that ministers see no reason to take any responsibility or ownership of the problems with network failures.

They just want to dump on the various companies and blame them. I asked if the companies have to have a contingency plan – it seems they do and that is part of the contract. But they only have to demonstrate they used “reasonable endeavours to provide alternative transport arrangements”. 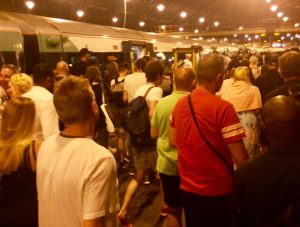 In the past I have made the point that an additional route to the coast via Uckfield and Lewes might help ease congestion and take pressure off the network.

Getting a sense of responsible management and commitment to public service would be a start but this is not a government that is interested.

Nationalising the services and getting rid of the track and train divide makes increasingly good sense and might be the start to improving services that increasingly grumpy commuters like me need.

My annoying questions will in the meantime continue.

Steve Bassam is a former Labour leader of Brighton and Hove City Council and sits in the House of Lords as Lord Bassam of Brighton.