The manager of a Brighton shop needed hospital treatment after being attacked by a suspected shoplifter. 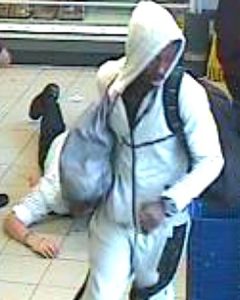 Sussex Police released a security camera image of the suspect who is being sought over the assault.

The force said: “The suspect was challenged by the manager at Sainsbury’s in North Street, who suspected he may have been shoplifting.

“After searching him, the suspect became aggressive and punched the victim in the face several times – requiring hospital treatment – before he made off from the scene.

“During the melee the suspect dropped a black mobile phone, however it did not contain a SIM card and has not been set up.

“He is described as black, about 5ft 10in, with black hair and facial hair, and was wearing a grey hoody and tracksuit bottoms, and grey/white trainers. He was also carrying a black backpack.

“The incident occurred about 7.15am on Wednesday 4 July, and it is unknown if the man stole anything.

“Anyone who recognises the man or who saw what happened is asked to report it online or call 101, quoting serial 212 of 04/07.