Drinkers, drug users and related criminal and anti-social behaviour have prompted a review of licensing rules for the centre of Hove.

Conservative councillor Andrew Wealls said: “There is a concentration of anti-social behaviour and alcohol and substance misuse related disturbance in a number of roads in Central Hove.

“There are emergency accommodation premises, some of which are entirely unsupported, a children’s home, two Equinox-run homes for women recovering from alcohol and substance misuse, two hostels for stag and hen dos and people needing emergency (self-supported) accommodation.”

He set out the problems and a call for action in a letter to Brighton and Hove City Council’s Licensing Committee – and he was supported by Labour councillor Clare Moonan.

They urged the committee to include their ward, Central Hove, in the council’s “special stress area” – the name for a zone where new alcohol licences are subject to greater scrutiny.

And now a consultation is under way to help the committee to decide if extending the special stress area is the best way to tackled the concerns about crime and disorder and public nuisance.

Any business applying for a new licence would have to show that it had robust plans to ensure that it would not add to the area’s problems.

The Police.uk crime map shows 124 reported crimes in Central Hove in June and 96 in what it calls the Adelaide area, immediately to the east.

Incidents of anti-social behaviour include three in Church Road, three in Seafield Road and two in Fourth Avenue.

The public consultation also includes considering the licensing terms for café bars across the city.

Officials suggested that the term “café” is more appropriate because these businesses are small food-led cafés or delis where alcohol is not the primary source of income and the venues do not open late. 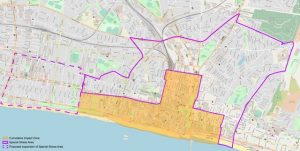 Licensing policies are tougher in Brighton and Hove’s “cumulative impact zone” along the seafront and in the “special stress area” mostly to the north, while an extension of the special stress area is being considered to the west, taking in Central Hove

Concern has been raised about the increase in the number of café bars granted a licence in the heart of Brighton and Hove.

The consultation asks whether the closing time of café bars should be moved from 11.30pm to earlier in the evening, with participants asked to write in their own suggestions.

Residents raising concerns at council licensing panels have highlighted problems with the number of licensed premises in an area designated a cumulative impact zone.

The zone covers the centre of Brighton and Hove, with council policy presuming that new licence applications would be turned down other than in exceptional circumstances.

The concentration of licensed premises, particularly in the North Laine area, has been blamed for an increase in public nuisance.