We should be proud of Brighton Pride despite the challenges

Well that was quite a Pride weekend!

Reading some of the media stories you’d be forgiven for thinking our city was overtaken by thousands of people intent of pulling our city to pieces … so let me just say a few words about what it was like from the inside looking out, rather than the outside looking in which is what most of the coverage has been.

Brighton and Hove Pride is now a huge event but it’s not just one crowd of thousands. It’s thousands of individuals with their own challenges and stories who come together for many reasons.

If you study at a crowd that big and you’re looking for something – good or bad – you will find it. Everything is there! 450,000 people took to the streets over the weekend, and the police arrested 30 people.

I was on the march, in the park, in Kemp Town late on Saturday night – and again on Sunday. The overwhelming sense that I got was of joy, celebration and carnival. I spoke to many, many people about why they were there and alongside the desire to party there were also stories of coming out, challenges at school or work and the sheer exhilaration of being in the middle of a gay celebration.

I remember standing on the sidelines as a youngster, watching, wondering if I should in fact be marching. Then a few years later when I was out and marching for the first time, I was convinced everyone was staring and judging me!

So believe me, just because it’s a big, brash and flamboyant event doesn’t mean that there’s not a lot of personal, tender things going on too.

There’s always talk about if Pride has got “too big” for Brighton. Fifteen years ago when we got 100,000 people attending, and I was on the board of Pride, people were saying it then. Indeed, there are challenges for our city.

On Saturday, 100,000 people arrived into Brighton station. The previous record was 60,000. To put that into perspective, every working day 35,000 people leave our whole city by train for work – and think how many problems they experience.

On Saturday we beat the previous record for train passengers by more than the number of commuters we have as a city!

But getting people in wasn’t the problem. It was when they left. As people left the park after Britney Spears finished, we all expected people to make their way straight to the station but most went to the seafront and Kemp Town. And the rush for the station happened an hour later than had been expected.

Five extra trains had been laid on, each with a capacity of 1,200. But security closed the station for 45 minutes, causing an inexcusable crush and delay to revellers trying to get home. And as people were already in the station and platforms, to clear the station trains were sent off half empty. This is a mess and we’ll get to the bottom of it.

Most people did get home though. The Brighton Centre was opened for people stranded here but only five people used it. 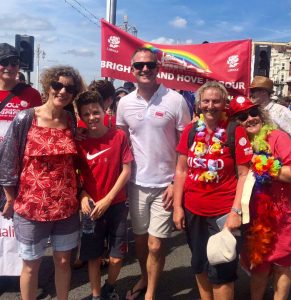 Govia get a lot of stick … mostly from me! But they laid on an extra 15 trains, decorated carriages with the Pride livery and moved an astonishing number of people between London and Brighton. I’m really grateful to the people who made this happen.

But there are lessons. Things will be better next year and I for one will be doing all I can to have a full overnight service running, plus exploring ways of using our city’s other stations to make the whole experience more comfortable for Pride-goers.

I didn’t drink at Pride. Instead I had hourly briefings from Govia bosses and Pride organisers. I really care about getting this weekend right and will always do everything I can to make that happen.

When the Albion moved from Withdean to the Amex Stadium and then into the Premier League, it presented our city with some real challenges. But we overcame those challenges and always framed our discussions in a positive way, celebrating the wonderful success that the Albion has brought to our city.

I believe we should be doing the same with Pride. We are now in the global premier league for festivals, yet our one is centred around equality and inclusivity. That’s a remarkable and special thing and we mustn’t throw it away.

By 8am on Sunday some people were walking along the beach and St James’s Street and sending me photos of rubbish with some pretty strong words about how terrible Pride is! I think that was a little unfair of them. 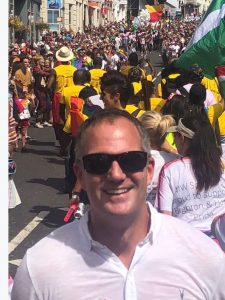 I know that Pride is a really big ask for our city. The centre becomes inaccessible for many on Saturday, buses and traffic are disrupted and our rubbish collection is stretched to the limit and beyond. But for me these are challenges to overcome, not reasons to abandon.

Pride is a big part of the cultural mix that makes us special as a city, one of the reasons people want to come and study here, visit us, or aspire to make Brighton and Hove their home.

More than £20 million was spent in the city last weekend. All of the Pride profit made from ticket sales and merchandising is given away to local community groups. These are groups that are desperately struggling with cuts and this year are likely to receive around £250,000.

And almost all of the money spent in our bars, hotels, restaurants and even airbnb stays right here in the city.

So from the personal stories of people who take courage from being part of such a big and confident LGBT+ event, through to attracting one of the world’s biggest entertainers, and then all of the economic benefit too, I think we as a city should be proud of Pride itself. Where there are problems or challenges we should be overcoming them. I for one will be doing everything I can to make sure that is the case.

So from me, a huge “thank you” to Paul Kemp who runs Pride, and his team. To all the public servants who worked their socks off to keep us moving, safe and healthy, a massive round of applause. And to the bar staff, litter-collectors and stewards, really well done and I hope you’ve managed a rest since.