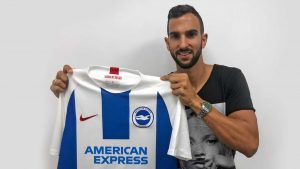 The Seagulls recruiting a player of such pedigree is a clear intention of the club’s desire and determination to consolidate their place in the Premier League.

Albion submitted a deal sheet to the Premier League – allowing the club an additional two hours to provide the remaining documentation on the transfer – and completed the deal ahead of the extended 7pm deadline.

Brighton manager Chris Hughton said: “Martin’s pedigree is excellent and I’m delighted we have been able to add a player of his standing to our squad. There is no doubt he will improve our options in the right-back position.

“He’s won several domestic and European honours in Spain and played the majority of his career in the top level of La Liga. He has a wealth of experience. At 27 years old he is a very good age. And I’m now looking forward to working with him.”

Hailing from Catalonia, Montoya follows the path set by Albion skipper and fellow right-back Bruno Saltor, who joined the Seagulls from the Spanish side in 2012. He will also link up with his former Valencia teammate Mat Ryan.

Montoya spent nine years in the academy at the Nou Camp, before graduating to the club’s B side in 2009. He broke into the senior Barcelona side in 2011 and made 67 appearances, helping the club to seven trophies – including one Champions League win and three La Liga titles.

Montoya spent the 2015-16 season on loan with Inter Milan and Real Betis, before moving to Valencia in 2016, where he’s made more than 50 appearances over the past two seasons.