A closure order has been served on a flat in Brighton after evidence of drug dealing was presented to magistrates.

The temporary order was served on Donna Watts, 39, of Rugby Court, in Bristol Gardens, Brighton, for 12 weeks.

Sussex Police said: “A flat in Bristol Gardens, Brighton, associated with incidents of anti-social behaviour, disorder and reports of drug taking has been temporarily shut down under a closure order.

“The partial closure order, under the Anti-Social Behaviour, Crime and Policing Act 2014, was heard before Brighton magistrates.

“It prevents any person from entering the premises at Rugby Court, apart from the tenant and other authorised persons until (Sunday) 21 October.

“Police became aware of anti-social behaviour and criminal activities being conducted at the flat, including drug taking and dealing.”

PC Andy Chapman, from the Brighton Prevention Team, said: “The occupier is vulnerable and those visiting the flat were making the neighbours’ lives a misery causing anti-social behaviour and drug misuse at the address.

“We worked with the local authority (Brighton and Hove City Council) to gain a partial closure order on the flat which will help prevent this behaviour from continuing.”

“The recent council tax increase will be used to strengthen these local teams.” 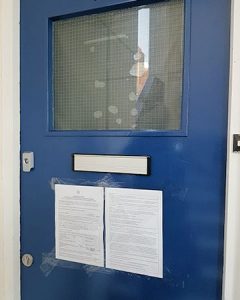 A closure order has been served on a flat in Rugby Court, Bristol Gardens, Brighton

“Further orders: The court has found on the balance of probabilities in relation to the address at 23 Rugby Court, Bristol Gardens, Brighton, (the ‘premises’)

(a) that a person has engaged (or if the order is not made) is likely to engage in disorderly, offensive or criminal behaviour on the premises and

“That the order is necessary to prevent the behaviour, nuisance or disorder from continuing, recurring or occurring.”

The order was made on Monday 30 July.