Neighbours are angry because they say that a new housing scheme has gone ahead without following the conditions set by a planning inspector.

A terrace of four houses in Marmion Road, Hove, have been built with deviations from the original plans which were approved on appeal in 2016, neighbours said.

Now the developer Albany Homes has applied for permission to allow clear glass in balconies, changes to the size and position of windows and the removal of proposals for two trees on the site.

The developer also hopes to overcome a condition that no wiring, meter boxes, pipework, aerials or flues be fixed to the houses facing the road as gas boiler flues and meters are on the front of the buildings.

Neighbours have sent 19 comments to Brighton and Hove City Council, opposing the changes.

One neighbour wrote on the council’s planning website: “The glass balustrades should have been obscure glass. They have inserted clear glass instead.

“The windows on the second and third floor look directly into the bedrooms of 2, 4 and 6 Mainstone Road, removing any privacy for the people occupying them.

“The only remedy is to place misted plastic film on our own windows, obviously at our cost, which removes our access to looking on to the street.

“The current position of the boiler flues was specifically prohibited by the planning inspector.

“I was also informed that trees would be planted which have been neglected.”

Another neighbour said: “We really do not wish to see any more building work. We have already endured two years of noise and dust. There is also currently another development going on directly opposite.

“However, I think the clear glass balconies should be replaced with obscure glass to protect the neighbours living opposite. 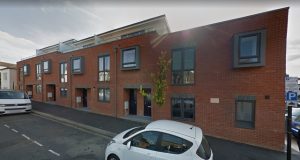 “The building does looks like a brick box and tree planting at the south of the building was promised with the original plans.

“I think the development could reduce the parking area so that trees could be planted instead.”

Planning officials have recommended granting permission for the changes.

The council’s Planning Committee is due to discuss the issue at Hove Town Hall next Wednesday (7 November).

The committee, which meets in public, starts at 2pm.