Plans due to go before Brighton and Hove City Council on Wednesday 7 November are to move a two-storey temporary building at the back of the college in Surrenden Road  and replace it with a permanent block.

The new building would have four science labs on the ground floor and six classrooms on the second floor.

One of the labs and one classroom would be accessible, with the second floor used by the special educational needs unit.

Neighbours have sent 28 letters against the plan, with lack of consultation, loss of green space and overdevelopment of the site among their concerns.

One objector on the council’s website said: “There has not been enough consultation with local residents.

“Reference to a ‘Master Plan’ indicates the college intends rapidly to increase its built environment in an area of green space that was designed for sport, recreation and open air education.

“The erosion of the campus green space and overdevelopment of the site has already led to far more traffic along roads unable to cope at busy times, with considerably less parking space for local residents.”

It said: “The temporary buildings, which have grown in number over the years, were always agreed to be on temporary basis with land supposed to be returned to its former condition .

“The temporary building relocation work contained in this plan has already been completed prior to gaining approval. This surely is not the correct way to progress.”

Planning permission for the temporary buildings was first granted in 1990, with successive renewals.

The college’s planning statement said that after 27 years, many were at the end of their life. 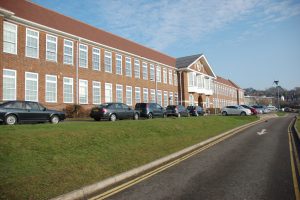 Future plans for the site include replacing the rest of the temporary buildings with a horse-shoe shaped two-storey building.

Concerns about the increasing number of students was raised in another online comment.

It said: “The college states it is only going to increase its numbers by 15 students but, over the last few years, they have increased the number of students attending the college considerably. Is this needed? I don’t think so.

“Colleges should be about the local community and encouraging young people to fulfil, along with government education guidelines, apprenticeships and learning a trade. ”

The college’s design statement describes the new building as there to “improve the quality of the education learning environment”.

College principal Phil Harland said: “Varndean College is the first choice college for students with learning difficulties and disabilities (LDD). Some 20 per cent of our students have some aspect of LDD.

“This planning application aims not only to address issues of overcrowding and demand generally but also the quality of provision and the equality and excellence agenda.

“We are regarded as the most inclusive and caring provider of post-16 education in the city.”

He said: “While there is strong support from the community for excellent STEM (science, technology, engineering and mathematics) education facilities – and in which I as a former student of the college wholeheartedly support such improved facilities – I do also ask that the designs are more in keeping with the local neighbourhood and the college.

“Given the college’s position on a hill any potential development on this space can be visible for neighbours.

“I consequently believe that the above factors are contrary to the City Plan.”

A report to the council’s Planning Committee supports the application. It is due to be discussed by the committee at Hove Town Hall next Wednesday (7 November). The meeting starts at 2pm and is open to the public.