A prolific bike thief has been jailed after stealing dozens of bikes from two railway stations in Brighton and from a sixth form college in Hove.

Only one of the bikes has been recovered. 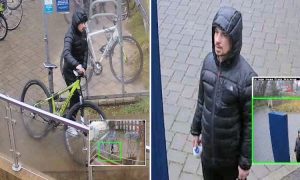 John Smith, 32, admitted stealing more than 40 bikes worth more than £21,000 over a year as well as going equipped for theft, with wire cutters, and having cannabis.

Smith, who is homeless, travelled from London to steal bikes from Brighton and Preston Park railway stations and to Brighton, Hove and Sussex VI Form College (BHASVIC), in Dyke Road, Hove.

He was arrested in July and also charged with stealing bikes from railway stations in Eastbourne and Winchester.

Helen Easterbrook, prosecuting, told Lewes Crown Court that Smith had form for stealing bikes and had been made the subject of a criminal behaviour order by Highbury Corner magistrates in March.

But within three days of the order being made, Mrs Easterbrook said, Smith was stealing bikes again in breach of the order.

Smith, formerly of Cathcart Hill, in Archway, North London, had 34 previous convictions for 56 offences, she said, “the vast majority of which relate to drugs or theft.”

He had even been given a 60-day prison sentence suspended for two years by a court in Hertfordshire a year ago – also for bike theft.

Mrs Easterbrook said: “This was a sophisticated offence with a significant degree of planning. If he’s not stealing them to order, he’s certainly getting rid of them very quickly.”

While she was able to conservatively estimate the value of the stolen bikes at more than £21,000, the cost of his crime was greater to the victims.

She said: “It affects their ability to get to and from work and college and to go about their daily business.

“This matter is aggravated by his previous convictions … and he is in breach of a suspended sentence.

“There is also the breach of the criminal behaviour order. These are very serious and persistent breaches, starting within three days of the order being imposed.” Stuart Dingle, defending, said: “The defendant has admitted his fault.”

But he said, “we are not talking about priceless family heirlooms” – or irreplaceable sentimental items such as old photographs.

Mr Dingle said: “The defendant was addicted to a number of illicit substances and his behaviour was exacerbated by his homelessness.

“He has a number of mental health conditions. He is autistic. He has ADHD. He suffers from anxiety and depressions and he has been diagnosed with a personality disorder.”

He had not appreciated the effect of the thefts on the victims, Mr Dingle said, adding: “He does regret his actions.”

Smith, who appeared by video link from prison, had been caring for his mother who has breathing problems because she suffers from chronic lung disease.

But Mr Dingle said: “He was an active professional criminal. There’s no getting away from that.

“He is sorry for his actions and wishes to apologise to the court and to his victims.”

Judge Christine Laing jailed Smith for a total of 30 months. She said that she had taken into account his guilty plea to the serial bike thefts, going equipped for theft, being caught with cannabis on four occasions, breaching a suspended sentence and breaching a criminal behaviour order.

Judge Laing said that she also had to take into account the totality of the sentence while recognising the repetitive nature of Smith’s offending and the sheer quantity of bikes stolen.

She said: “This was a deliberate, flagrant and repeated set of offences. I am dealing with over 40 offences of stealing bikes that were very important to the people who relied on them to get to work or to college, in particular BHASVIC.

“The total value of the bikes that you accept that you have stolen comes to over £21,000 which is a very substantial amount.

“You have a very long and persistent record of serious offending.

“Only a substantial custodial sentence is going to protect the public in the near future.”