Planners are at odds with neighbours who have welcomed an application to build four homes in long back gardens.

They have advised councillors to turn down the application when the council’s Planning Committee meets next Wednesday (9 January).

They said that the four houses were too close together, would generate increased traffic and overlook neighbours.

A report to the committee said: “The proposal would fail to respect the prevailing character of the locality and would cause significant harm to the character and appearance of the area.”

A previous application was refused in June for the same reasons.

Planning consultants Lewis and Co said that the gaps between the proposed new homes had been increased since the previous application – and the houses had been redesigned with open brick fronts to prevent overlooking.

She called for the decision to be made by the Planning Committee if officials felt that they could not back the scheme.

Councillor Mears said: “I believe the proposed development is suitable for the site in terms of size and materials, and note this is a second improved application.

“The development will also assist in the council’s shortfall of proposed housing units.” 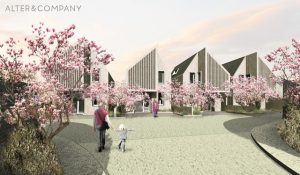 Back garden homes planned for Woodingdean

Councillor Mears wrote on behalf of Woodingdean Conservative councillor Steve Bell, who was away and unable to respond to the application within the deadline, and fellow Woodingdean Tory councillor Dee Simson, who cannot intervene as she is currently serving as mayor.

Neighbours have sent nine letters of support for the project and one against.

Those for the scheme said that it made good use of long gardens, provided much-needed homes and was in keeping with the area.

The neighbour objecting was concerned about loss of privacy and increased traffic.

The application is due to go before the Planning Committee at Hove Town Hall next Wednesday (9 January). The meeting, which starts at 2pm, is open to the public.