An arsonist who used to live in Brighton is being hunted by police for recall to prison. 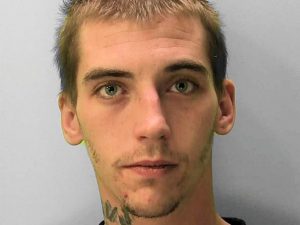 Sussex Police said: “Police wish to trace 25-year-old Jordan Peters, a convicted arsonist, who is wanted for recall to prison after breaching the terms of a licence for his early release.

“At Lewes Crown Court on (Friday) 1 August 2014 Peters was sentenced to six years’ imprisonment for arson with intent.

“He was granted early release on licence on (Friday) 23 November last year but, after breaching its conditions, his licence was revoked on (Friday) 14 December and he must now return to jail.

“Peters has previously lived at addresses in Rye, Hastings, Icklesham and Brighton.

“He is described as white, 5ft 8in, slim with fair hair and blue eyes. He has a distinctive tattoo on the right side of his neck.

“Failing to give himself up means Peters could be charged with being unlawfully at large.

“Additionally, anyone found with him and knowing that he is wanted could be committing the offence of harbouring for which they themselves could be arrested.

“If he is seen, please do not approach him but call 999 immediately.”