Drugs and cash have been seized in what Sussex Police described as a “significant” haul. 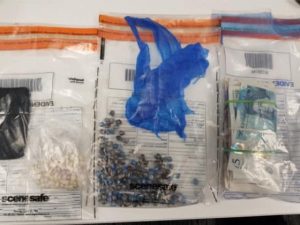 The force said: “Police officers in Brighton seized more than 100 wraps of class A drugs and cash and arrested a woman on suspicion of drug dealing.

“Following up on reports that a woman was suspected of drug dealing in Pool Valley, in Brighton, on Friday (11 January), city prevention officers detained a 21-year-old suspect from London and searched her.

“They found 19 wraps of suspected cocaine on her and then carried out a further search of the hotel room she was staying in where more than 100 wraps of class A drugs and cash were discovered.

“She was arrested on suspicion of possession with intent to supply class A drugs.

“She was interviewed and released under investigation.”

“We are continually working to make Brighton and Hove a hostile place to deal drugs.

“We will carry out warrants, proactive and reactive stops acting on intelligence and information we receive.

“We ask anyone who has any information or concerns about drug dealing in the city to contact us.”