Is this the man who started a fire at a Brighton branch of McDonald’s?

Police are trying to trace a man suspected of starting a fire at a branch of McDonald’s in Brighton. 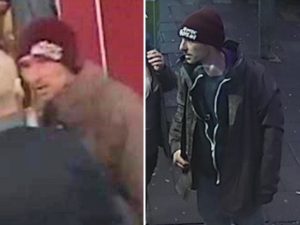 Sussex Police said: “Police are appealing for witnesses after a man started a small fire in London Road, Brighton, on Friday evening (25 January).

“The man had been in the McDonald’s branch around 4.45pm when a verbal altercation occurred and staff asked him to leave.

“He did so, but returned around 6.20pm and started a small fire outside the premises, which was attended by East Sussex Fire and Rescue.

“No one was injured and the fire was quickly extinguished.

“The suspect is described as white, 5ft 10in to 5ft 11in, of slim build and wearing a green jacket, jeans and a maroon or brown beanie hat with white writing on the front.

“If anyone witnessed the incidents either inside the McDonald’s or outside, please report online or call 101 quoting serial 989 of 25/01.”