Six people face arrest over the £40 million fraud at cake shop chain Patisserie Valerie, according to a report in the Sunday Times.

The newspaper said that up to six people appeared to be culpable, with their names contained in a report by the accountancy PricewaterhouseCoopers (PwC).

It is alleged that they signed fraudulent cheques and sent emails discussing made-up invoices.

The patisserie chain collapsed into administration last month, after a £40 million black hole was found in the company’s accounts in October.

Hundreds of jobs were lost as dozens of branches closed, including the café in East Street, Brighton.

The branch in Western Road, Hove, remains open as another firm, Causeway Capital, bought the remainder of the chain.

Patisserie Valerie suspended trading of its shares in the autumn as it emerged that cheques worth millions of pounds had been used to make the company’s bank accounts look healthier than they were.

Five more people are believed to be under investigation. Three are said to have been junior staff.

The suspects do not include the former executive chairman Luke Johnson, who also owns the Palace Pier in Brighton, and who put in his own money to try to keep the business afloat until the banks – Barclays and HSBC – pulled the plug.

Mr Johnson is thought to have been interviewed as a witness along with non-executive directors Lee Ginsberg and James Horler.

Business rates and VAT bills are believed to have gone unpaid, with more than £10 million owed to Revenue and Customs.

The company’s cash shortage appears to have been concealed by using up to 15 secret bank accounts.

The new branch, in the North Laine area, is the third outlet, after the original site in Ship Street, Brighton, (home to its roastery) and the second, in Cliffe High Street, Lewes. 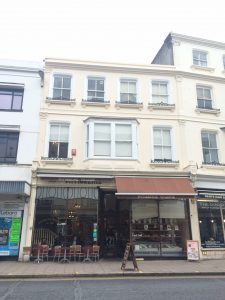 The new branch will include a roof terrace, to open in the spring.

The company sells its own artisan blends of coffee and has a fresh food menu which is mainly organic.

The new branch will also offer an all-day brunch menu.

Trading Post Coffee Roasters hopes to expand and is looking for sites in market towns in and around Sussex.

According to the food and drink industry newsletter Propel, the Kensington Gardens premises were acquired by Brighton and Hove agent Watkins Commercial, led by Emma Watkins, which is also heading the search for further sites.