Life-saving work by Police Dog Darcey in a Brighton park earned the German shepherd a national award at Crufts. 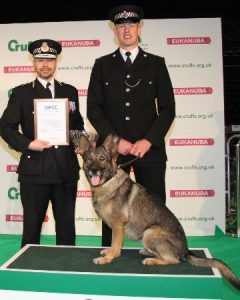 Sussex Police said: “A Sussex Police dog handler and his canine counterpart have been recognised for their heroics with a national award.

“PC Tom Mills and PD Darcey, his German shepherd, are the worthy winners of this year’s NPCC Police Dog Team Operational or Humanitarian Action of the Year award.

“In October last year, South East Coast Ambulance Service required Sussex Police’s assistance, having been called by a man who had stated in no uncertain terms that he intended to take his own life in a local park in Brighton.”

Deputy Chief Constable Jo Shiner said: “Having been given the suspected location of the missing person, PC Mills was the first on the scene.

“On arrival of the area and with good local knowledge, PD Darcey was deployed to locate the man.

“Without delay, she ran straight towards a tree among the undergrowth where the man had already made an attempt to take his own life.

“First aid was quickly administered, with paramedics arriving on scene to assist.

“Had it not been for the swift actions of PC Mills and the quick location of the missing man by PD Darcey, allowing medical aid to be given very quickly, the outcome would almost certainly have been a loss of life.

“Instead, after a spell in an induced coma, the man went on to make a full recovery.

“This shows the true value that our operational dogs – supported by their handlers, the schools and the kennels behind them – bring to Surrey and Sussex on a daily basis.

“This national recognition is a source of great pride to us all and is a real credit to both PC Mills and PD Darcey for the life they saved. A huge well done.”

The award was presented at Crufts on Sunday (10 March) and was televised on Channel 4.