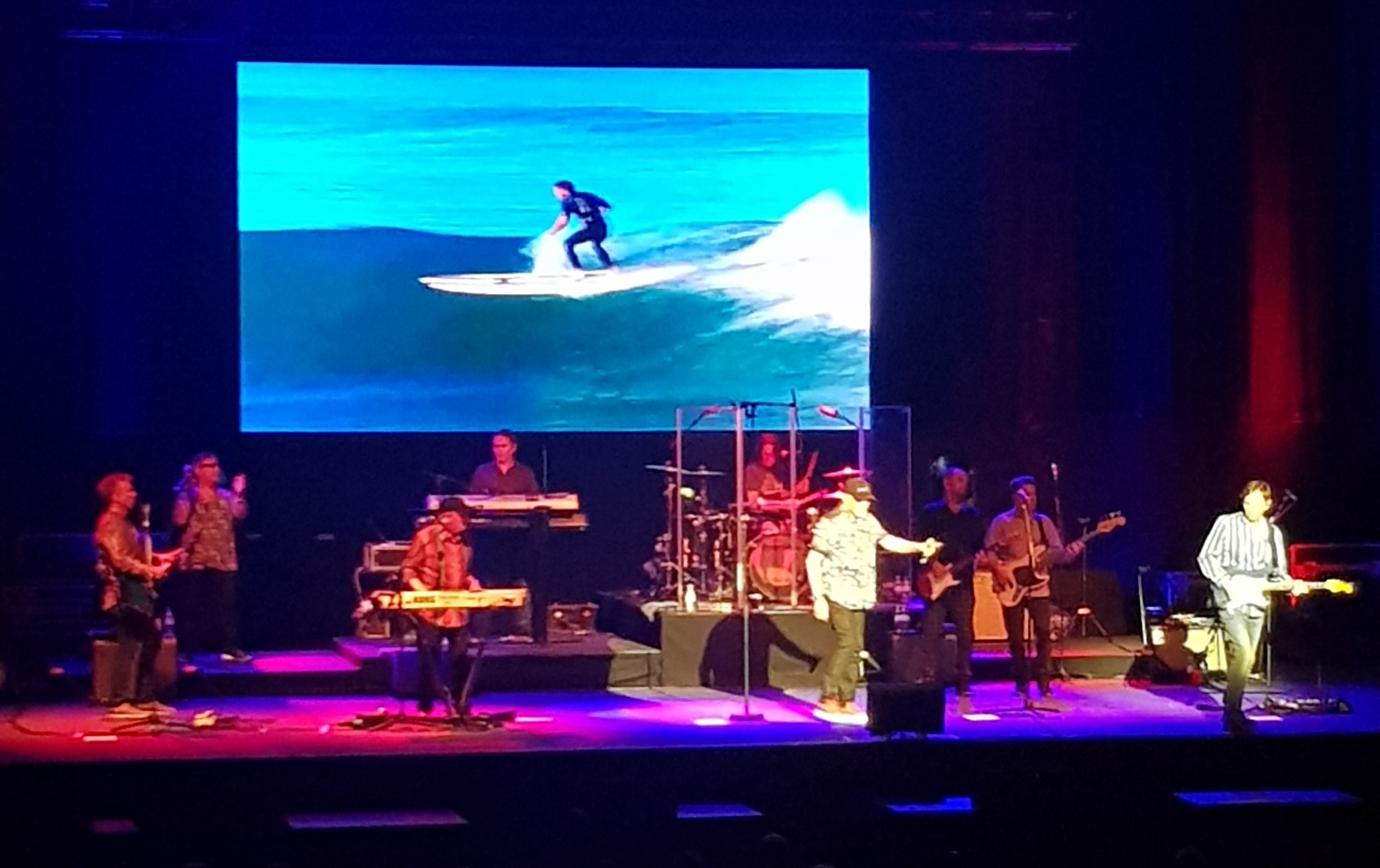 The Beach Boys became a sensation in the 1960’s, signing with Capitol in 1962 and releasing their first album, ‘Surfin Safari’ the same year. Their famous harmonies and arrangements in a huge catalogue of hit records epitomised youth, hope and summer, an American rival to The Beatles.

Fifty years later, with many accolades under their belts, ups and downs within the group, and, sadly, the deaths of Carl and Dennis Wilson in 1998 and 1983 respectively, Mike Love, Brian Wilson, Al Jardine and Bruce Johnston created a new album together in 2012 entitled ‘That’s Why God Made The Radio’. They planned a huge tour of Europe and the US, unfortunately, Brian Wilson has had health problems and has had to retire from the tour, but the ‘new version’ of the Beach Boys were playing their second gig in Brighton this Saturday night…

A full Brighton Centre waited in suspense for The Beach Boys to arrive on stage. Would this version of the band be any good? Would the two members from the original band be up-to-scratch? Would they play all their hits? 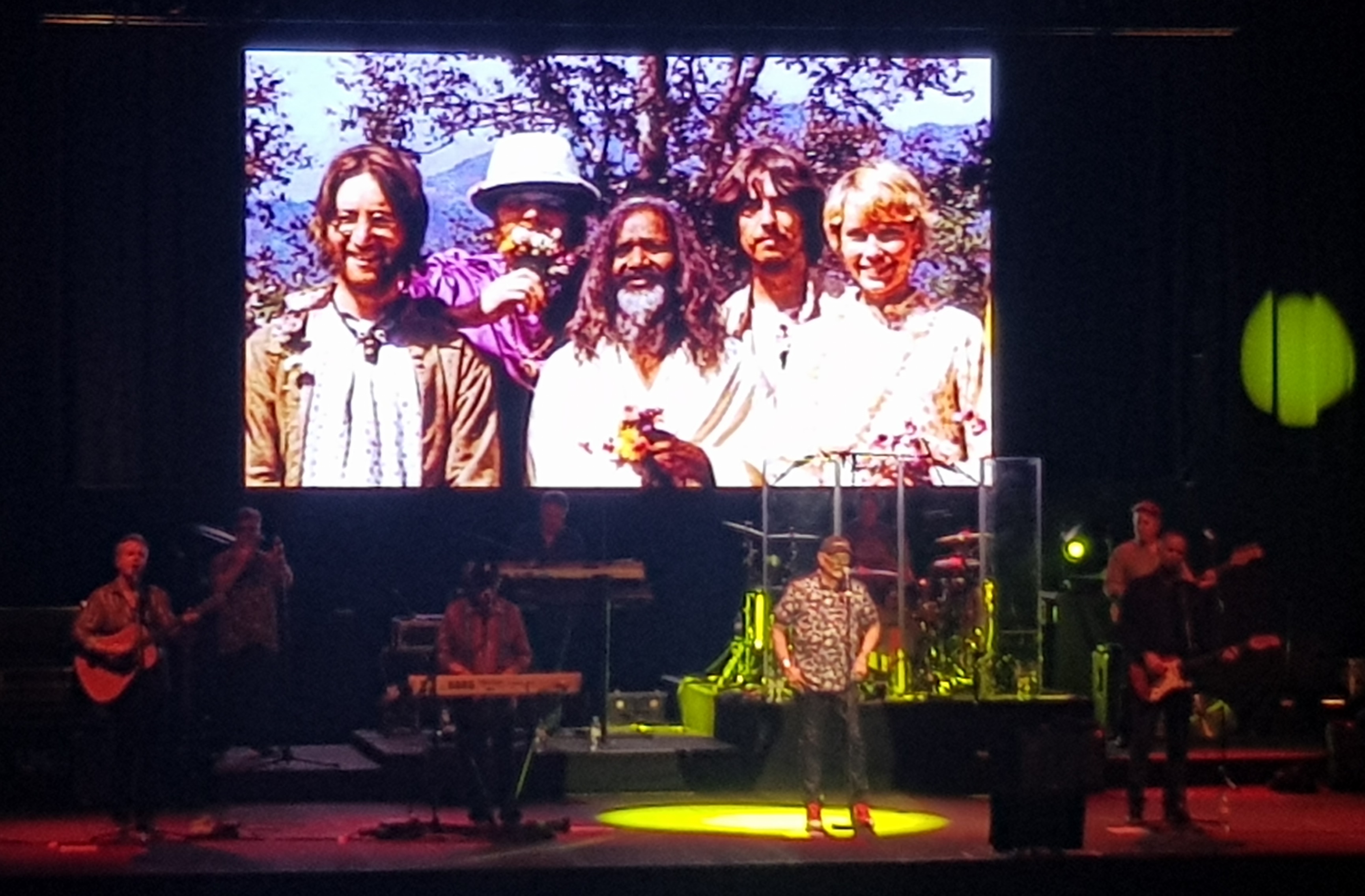 The band started off tentatively, unsure of the reception they would receive, but the excellent, tight musicians soon let the great songs sing out for themselves and the audience responded. We recognised many hits in the two hour set, standouts were ‘Surfin’ U.S.A’ and ‘I Get Around’ during which the audience all stood up to celebrate and we knew the evening had really started. ‘In My Room’, a beautiful ballad, was really enhanced by the great film and visuals used as a backdrop to the stage setting. ‘You’re So Good To Me’ had fine vocals by both Mike Love and Brian Johnston, who sang many numbers and very well too. The vocals throughout were shared between band members, and all were really good.

By the time they played ‘Oh Darlin’’, I was jiving in my seat, then ‘Do You Wanna Dance?’ was answered in the affirmative by most of the audience and this was no longer just a clinical run through of all The Beach Boys hits, it was a celebration of an iconic band’s work, cleverly teamed with vintage footage which often matched original instrument playing with the band’s current instrument playing.

‘The Warmth Of The Sun’, which had been written about a month after Kennedy’s assassination, at the beginning of 1964 was followed by ‘Cotton Fields’, ‘Disney Girls’ and ‘This Is That’ and so the beautiful harmonies and signature sound continued…‘Sloop John B’, ‘Wouldn’t It Be Nice’ ‘California Girls’, we knew all the words. The final number ‘Good Vibrations’ summed up how the audience was feeling. There were two encore tracks, with the first being a Beach Boys style version of the Ramones’ ‘Rockaway Beach’ (which will be available on Mike Love’s forthcoming new album ‘12 Sides of Summer’, which comes out July 19th) and the other encore track being ‘Fun, Fun, Fun’ which rounded off a great evening.

It may have been a different line up, with Mike Love and Brian Johnston the only original members, but it gave us shivers of pleasure to listen to so many amazing songs from a different era. The whole concert was a musical and visual tribute to a 60’s supergroup, the songs stirred up golden memories for most of the audience, past dreams of surfing, sunshine, bikini-clad girls, freedom, youth, convertible cars, The Beatles, Love, Carnaby Street and a world of hope.

The time may be gone but the music remains forever, thank goodness. We’ve gotta keep those lovin’ good vibrations a happenin ‘.

The Beach Boys setlist this evening as far as I can recall was:

Find out more about The Beach Boys HERE.