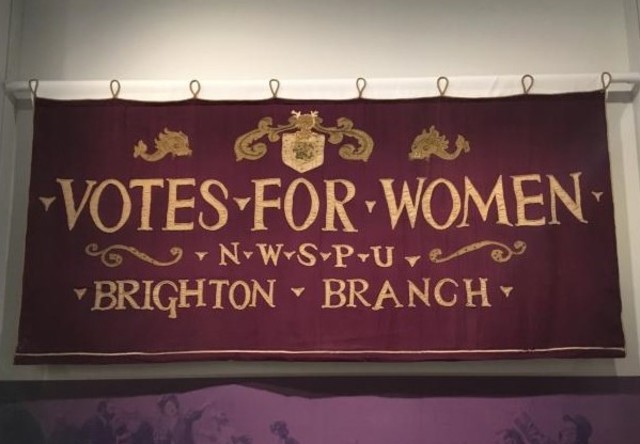 More than 500 people have signed a petition calling for the return of an historic banner to Brighton.

The Brighton and Hove Women’s History Group want the return of the banner which dates from when women were campaigning for the vote in the early 20th century.

The banner, which is currently in a museum in Manchester, includes the slogan “Vote for women” and the name of the “NWSPU Brighton branch” – the National Women’s Social and Political Union.

She told the council’s Policy, Resources and Growth Committee meeting at Hove Town Hall: “Brighton and Hove played a very important part in the struggle for women’s suffrage – our right to vote.

“The magnificent suffragette banner of the Brighton branch of the National Women’s Social and Political Union (formed in 1907) is made of beautiful purple twill woven wool, with an applique lettering of cream cotton sateen and white silk-wrapped cotton cord.

“However, it is displayed in Manchester, not here in Brighton.

“Many activists, including Mary Clarke, sister of Emmeline Pankhurst and the first suffragette to die for the cause, a death brought on by forcible feeding, worked tirelessly in Brighton to drum up support from local people and to help turn the tide of women’s rights.

“One of Brighton’s Borough Councillors, the late Andy Durr, discovered the banner in a local second-hand shop, and donated or loaned it for safekeeping to the People’s History Museum which was then in London but is now in Manchester.

“We are convinced that this banner needs to come back home to stand as proud testimony to the work of the women of Brighton and Hove and to educate future generations.

“Returning this banner to Brighton will demonstrate that Brighton and Hove City Council has not forgotten the bravery of these women and show the people of today and future generations that they have these courageous women to thank for their democratic right to vote.

“Voting is now taken for granted. However, we need to let our children know that it wasn’t always so, that women fought long and hard and many died for this basic right to have a say in the running of our country. 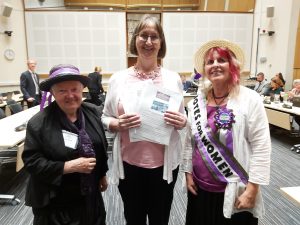 Council leader Nancy Platts said that the banner was part of a display going on a national tour which would reach Brighton in 2021.

There was no commitment, though, to seek the permanent return of the banner.

She also said: “We have more women on the Policy, Resources and Growth Committee than ever before.”

Six of the 10 committee members were women at the meeting this afternoon.

Former Conservative council leader Mary Mears called for a report, with a view to submitting a formal request for the banner to be returned to Brighton. This was agreed.