Brighton and Hove Albion’s first season in the Premier League generated an estimated £212 million for the local economy.

The club is now the fourth-largest employer in the Brighton area.

In a report published today (Thursday 18 July) the club said: “It contracted with over 500 businesses, many of them local suppliers.

“Along with football club-related tourism, this helped to support over 330 further jobs in the Greater Brighton economy.”

The club said: “Brighton and Hove Albion Football Club’s rise from the brink of non-existence to the Premier League is one of the great renaissance stories of English football.

“Its social and economic contributions are less well known but they are critically important to the Greater Brighton city region.

“The foundations to Premier League promotion were laid by connecting the club tightly to its local community, developing a shared vision with local residents, making brave and ambitious investment decisions to develop award-winning community sports facilities and securing the support of public sector partners to turn these investment plans into reality.

“The Football Club has become one of Greater Brighton’s major international businesses, contributing £212 million to the city region’s economy, including £50 million of export income.

“Direct revenue soared from just under £30 million in 2016-17 to nearly £150 million in 2017-18, enabling the club to make a step change in the contribution that it makes to the local economy.

“The football club is one of the fastest-growing private sector businesses in the Greater Brighton city region.

“The club contributed over £54 million to HM Treasury in taxes and national insurance contributions in 2017-18 including £1 million in local business rates.

“These tax contributions would be enough to pay the salaries of over 2,000 band 6 nurses or build nine new primary schools.”

Albion chairman Tony Bloom said: “When we commenced the planning of our new stadium in 1997, the board published a ‘vision’ which included our aspirations to build a stadium which would provide ‘state of the art facilities, to ensure a better visitor and club supporter experience’ and it would ‘create jobs, increase visitors and provide important and worthwhile community benefits’.

“During the long public inquiries we predicted the stadium would deliver £23.5 million into the local economy and 750 jobs.

“This report now shows that we have more than delivered on all of our promises and provides evidence of the huge economic and social benefits to the Greater Brighton city region which have accrued as a result of our promotion to the Premier League in 2017, twenty years after we first set out what we were trying to achieve.

“I am extremely proud of those achievements. We did not just deliver a Premier League stadium, we have also delivered world-class training facilities.

“We have built a team that we can be proud of and who have just secured our third season in the Premier League.

“We have accumulated along the way a wonderful, hard-working and loyal workforce, who run the club with skill and the very highest standards of professionalism.

“Finally, we have a fantastic fan base without whom none of this would have been possible.” 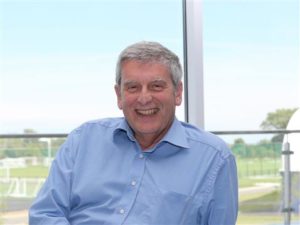 “It has become an integral part of the football club. In a recent study 94 per cent of fans responding to a survey agreed that it was an important part of the culture and philosophy of the club.”

Mr Perry said that in Albion’s first season in the Premier League, the charity generated almost £30 million of social value, helping tens of thousands of people locally and beyond.

It has given people with disabilities the chance to play sport, helped people into work and provided a platform for health education.

He said that the club and its charity punched well above their weight and, with matches televised around the world, had brought Brighton as a visitor destination to an even wider global audience.

Chief executive Paul Barber said that many visiting fans stayed in local hotels for one or two nights and ate and drank in local restaurants, pubs and bars, also boosting the local economy.

An audience of business men and women and civic leaders heard that – despite the cost of parking – Albion remained the favourite club for away fans to visit.

The report was prepared by regeneration consultancy Marshall Regen, headed by Scott Marshall, in collaboration with Chichester University.