1) All those Premier League tables that show our Brighton and Hove Albion as being in third position with only Manchester City and Liverpool above them, eclipsing the previous highest position of fifth briefly held by Mike Bailey’s boring boring Brighton in September 1981. 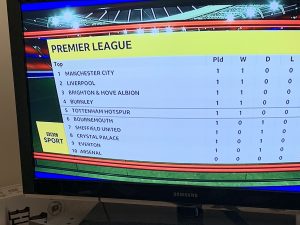 2) The first opening day top flight win since beating Wolves at the Goldstone in August 1980.

3) Remembering the dark days of late October 1996 when the club lost at home to Darlington at the Goldstone and plummeted to 92nd and bottom of the entire Football League.

4) Graham Potter’s inspired substitutions and the delight as Florin Andone and Neal Maupay ensured the emphatic performance against Watford was no own goal fluke.

5) That our prediction that Potter might be gone by December may come true after all, as he is poached by an under-performing top six side. Ole to that not happening.