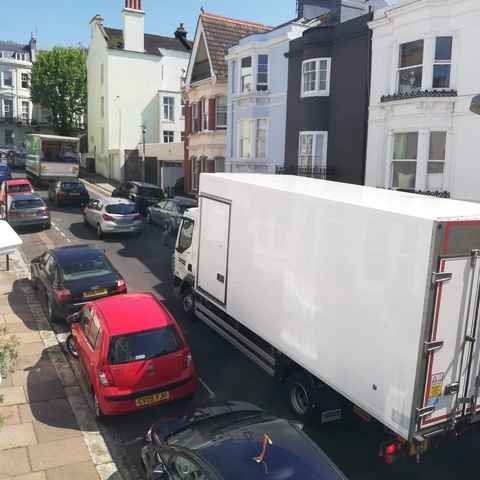 People living in a city centre street want to close one end to stop it being used as a rat run.

Residents of Temple Street are sick of cars, mopeds and even HGVs using the one way street to avoid the traffic lights by Waitrose on Western Road.

They are asking the council to close it off at the Western Road entrance – but make it two-way from Montpelier Place.

An e-petition on Brighton and Hove City Council’s website received 159 signatures, allowing campaigners to take their case to the Environment, Transport and Sustainability Committee.

People living in Temple Street have held public meeting with council officers and have the support of Regency ward councillor Tom Druitt.

A temporary road closure in the summer proved an improvement, according to residents, who feel the road is now an established alternative for drivers avoiding the traffic lights by Waitrose.

Temple Street resident Karen Boyd said: “Residents are totally fed up with the noise and volumes of traffic and we are all scared that someone is going to get hit by a speeding vehicle.

“They don’t slow down and travel way over the speed limit.

“We’ve also got higher than average nitrogen dioxide levels on the street because of the volumes of traffic and the fact there is no way for the pollution to escape on such a narrow street.”

She said increasing numbers of delivery motorbikes from the large number of restaurants and take-aways in the area, as well as couriers, taxis and HGVs are among the contributors to increasing fumes.

The volume of traffic is compounded when supermarket delivery vans end up blocking the road because it is too narrow to pass.

The road is part of the Montpelier and Clifton Hill Conservation area with houses built in the 1800s.

The petition will be presented to the Environment, Transport and Sustainability Committee when it meets in public at Hove Town Hall from 4pm on Tuesday, 8 October.