Sophie And The Giants – talent waiting to break big! 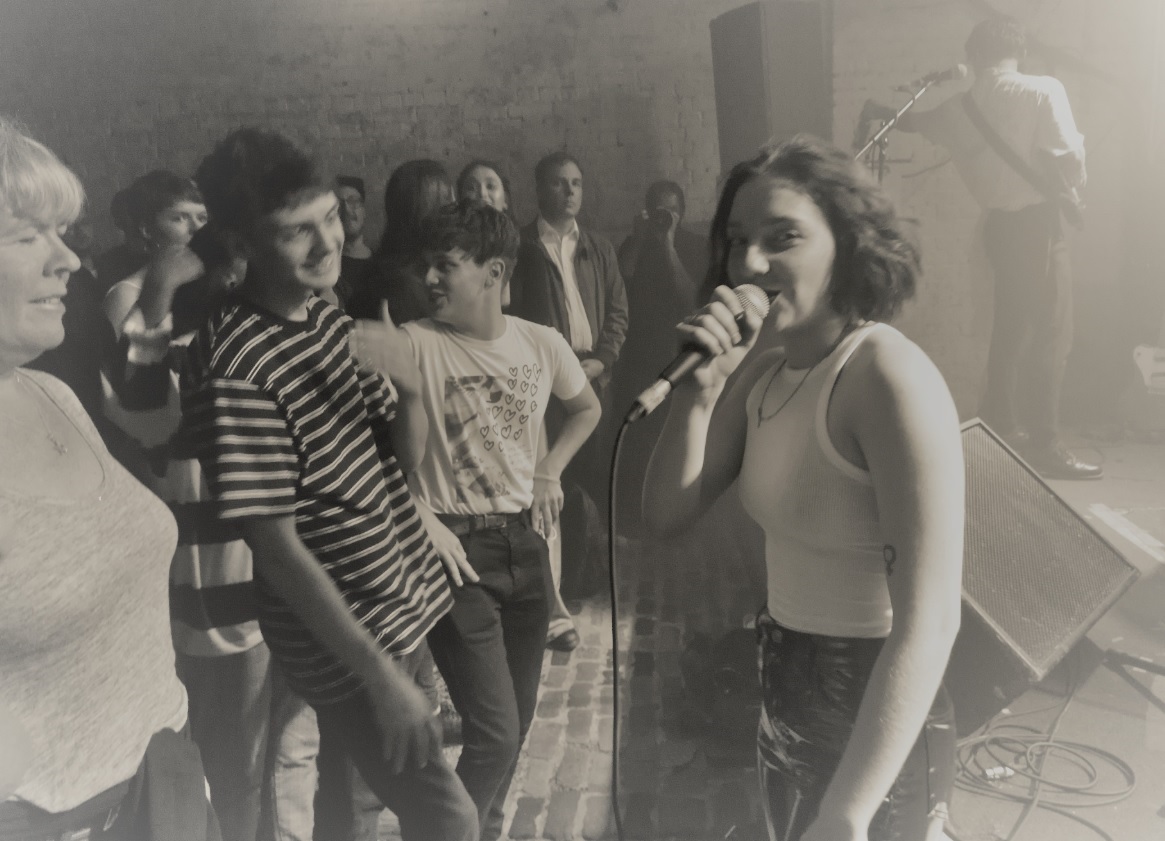 Up close and personal with Sophie, The Green Door Store, Brighton 15.10.19 (pic Nick Linazasoro) (click on pic to enlarge!)

SOPHIE AND THE GIANTS + RUBBER JAW + SOMETHING LEATHER – THE GREEN DOOR STORE, BRIGHTON 15.10.19

Sophie And The Giants – store that name into your memory box, OK? As it’s a name we reckon that you will be hearing more and more as time goes on.

They were closing their 11-date UK tour here in Brighton this evening courtesy of Lout Promotions at the ever popular Green Door Store, having worked their way down from York, where they appeared a couple of days ago.

Sophie And The Giants formed at music college in Guildford during the spring of 2017 and are former Staines resident Sophie Scott (vocals/guitar), along with Toby Holmes (lead guitar) and Chris Hill (drums). They were joined in around June by Antonia Pooles, who replaced Bailey Stapledon on bass. Antonia being the only person in the band that we had knowingly seen perform live before, when we saw her as part of the FØXE trio (that she had joined in September 2015) at the Alternative Great Escape on 18th May 2017 in the North Laine Brewhouse, which was around the time of their ‘Bubblegum’ single. Incidentally SATG played The Great Escape in Brighton last year. 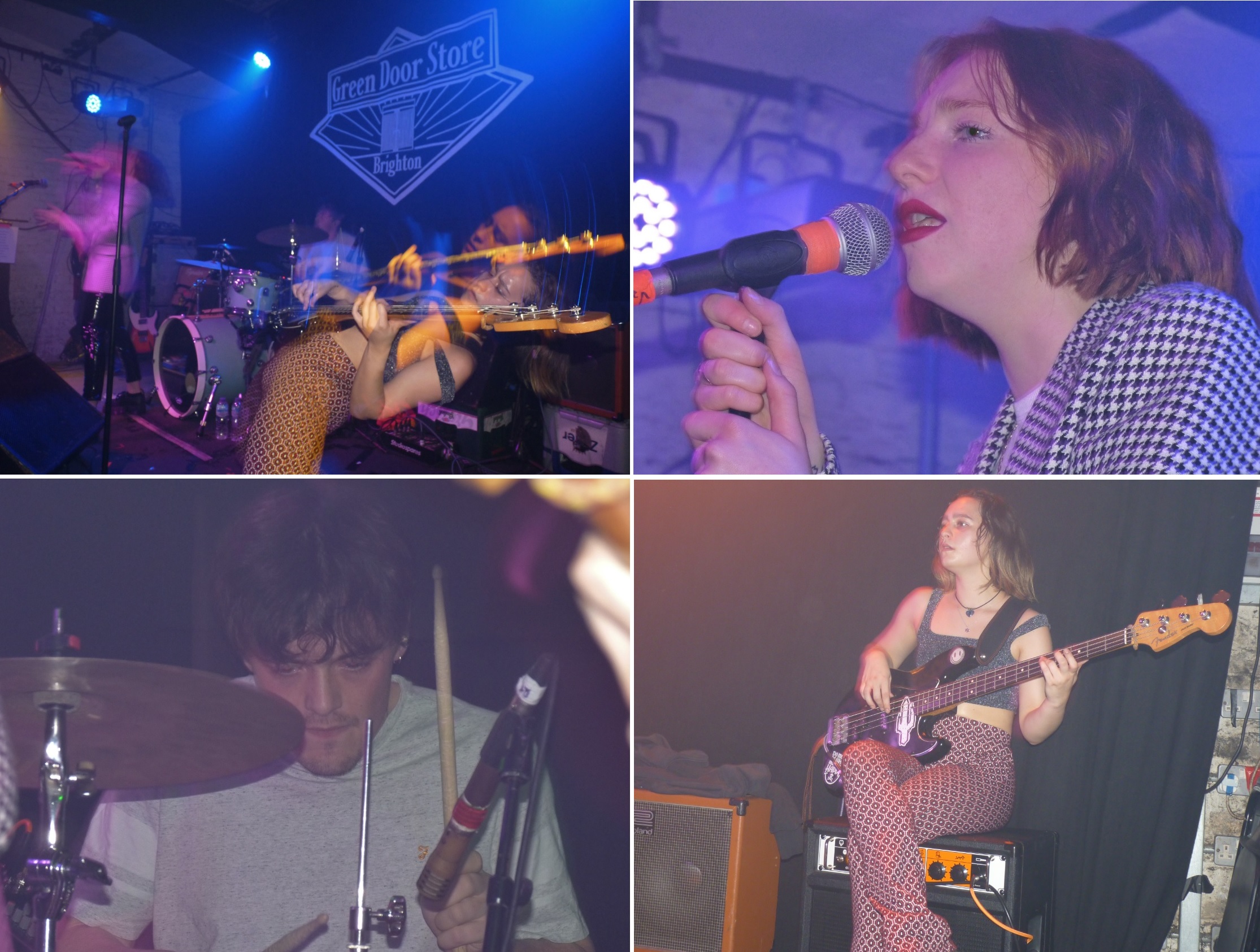 Sophie And The Giants live at The Green Door Store, Brighton 15.10.19 (pics Nick Linazasoro) (click on pics to enlarge!)

These days SATG are currently based in Sheffield and are purveyors of alt-pop and now have the right two girl-two boy balance to the band. Sophie has been quoted as saying “We want people to come together because of our music”, and that sure is the case as they are building a rapidly swelling fan-base and have racked up the better part of 10 million streams from their debut EP, ‘Adolescence’. They’ve also picked up fans in radio with support from, BBC Introducing, Radio 1 & Radio X. In August they unleashed their latest single ‘Break The Silence’, which you can check out HERE.

‘Break The Silence’ finds the band in anthemic mode, with a simple piano riff during the verse exploding into a propulsive drum-and-synth driven epic for the chorus, with Sophie’s emotive vocals shining through at the heart of the song.

Lyrically the track is a call to arms, as Sophie explains: “Break the silence is about using your voice as your most powerful tool, even if it’s scary. When you’re someone who’s never felt like you’ve had a voice, listen and empower yourself to let go of that fear. It could make the biggest difference and it might help us all learn to be honest without fearing rejection or judgment. It’s about shouting out and making yourself heard.”

Continuing to go from strength to strength SATG are cementing their position as one of the hottest emerging acts in the UK. Live they’ve supported Tom Grennan, Barns Courtney and a multitude of others whilst also being invited to play Radio 1’s Big Weekend, Glastonbury and Reading festival this year.

Clearly myself, my colleague and all of the Green Door Store punters were in for a real treat tonight as SATG ploughed through their most enjoyable 10 song set of recorded and hopefully soon-to-be-recorded material. Sophie sure does feel the lyrics and delivers them with passion, whilst Antonia literally bends over backwards with her bass, and the boys merrily plug away. They have a modern sound, which I’m sure many have compared to Florence + The Machine, and SATG sure do have the potential to go all the way. After their performance, I requested that my colleague, Martin, convey to Sophie, what he had informed me during their set, which was that “the last time I witnessed so much potential was a few years ago up at The Hope & Ruin when Dua Lipa was performing!”.…and look what happened to her!

Listen to them on Soundcloud. 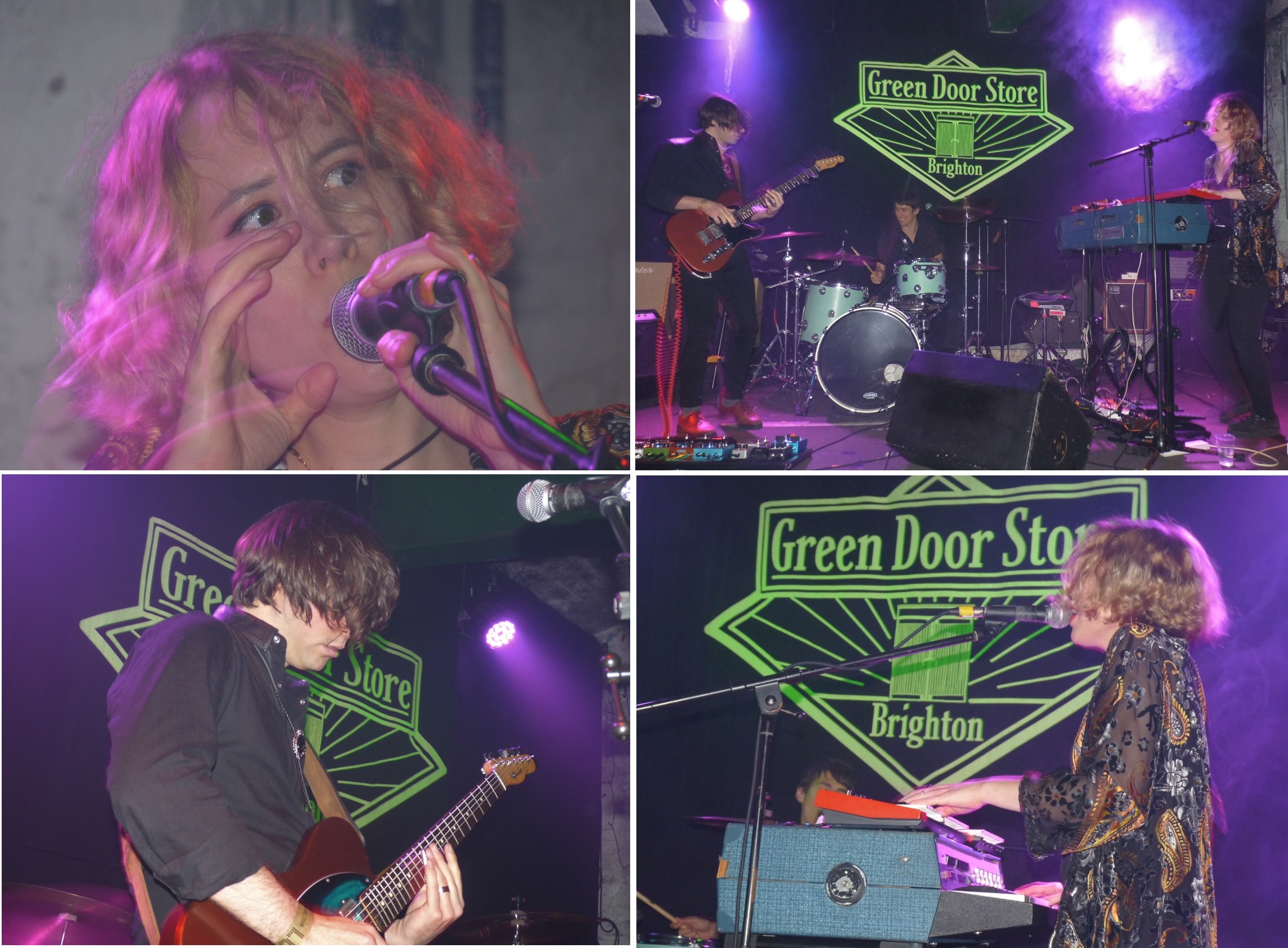 First up this evening were Something Leather who are a Brighton based trio consisting of Phillie (vocals/organ/synth), Greg (guitar) and Mike (drums), who have gravitated to our city from as far away as Switzerland, as in the case of guitarist (and budding scientist) Greg Pass.

They inform us that they offer “Organ Driven Dark Trippy Alternative Rock”, which is rather similar to my concert notes where I wrote “there’s a swirly psych vibe going down”. The organ sound is courtesy of what appears to be a vintage Phillips classic and neatly positioned on top of this is a more compact Korg synth, both of which are the charge of Phillie. One could argue that they are a psyched out version of French band Juniore.

The punters enjoyed their seven song set which included their latest single ‘Velvet’, it’s follow up single ‘Lullaby’ is which due for release on 25th October as well as a new as yet unnamed track. 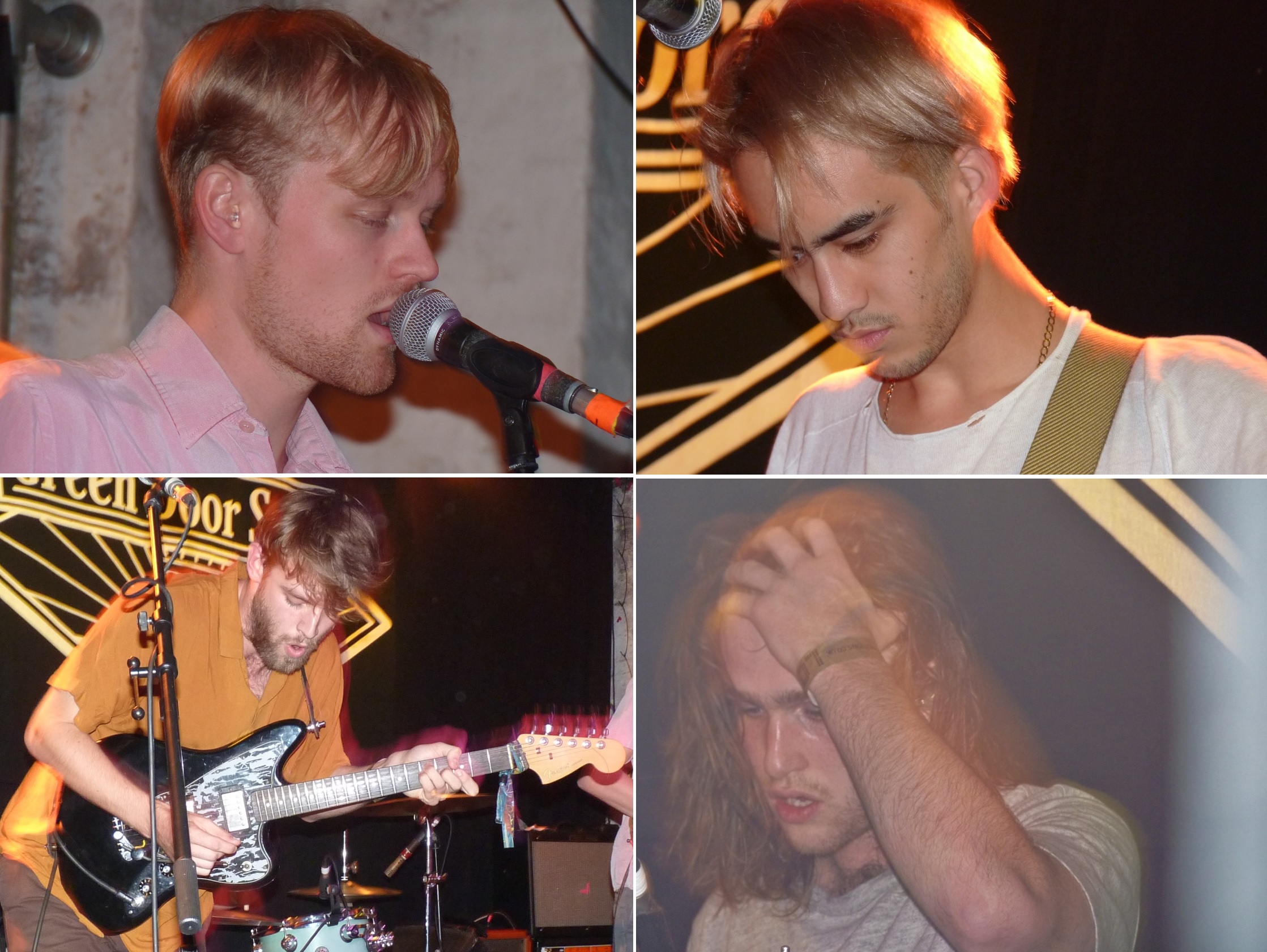 Next up were Rubber Jaw who hail from the rock capital of the world, Elmstead Market! Nope, I hadn’t heard of it either! It’s a village that is a few miles away from Colchester in Essex.

They are listed as a trio consisting of Michael Hemmings (vocals), Ross Connell (guitar) and Archie Mann (drums), however this evening they are a quartet. Now these lads really need to get on top of things and keep the momentum going, including expanding their social media with more posts and a website. The reason for this is evident, although not totally my bag if I’m honest, I can smell future success and these guys, whether they know it or not, have talent by the bucket load!

Their sound is alt rock/indie rock but with more than a nod to Coldplay and Mumford & Sons, although heavier, as well as some Bono vocals being slipped in from time to time. They really should be shooting up the pecking order and making their way to eventually perform in stadiums. I really don’t think they know what they are sitting on. Alan McGee does, as his relatively new 7″ boutique label Creation23 have released two 7” singles by the band, namely ‘Freaking Out’ / ‘Dirty Lip’ (dirty white vinyl) from March this year and ‘Feeling Funny’ / ‘Bumpy Faces’ (dark blue vinyl) from October last year. Buy them HERE.

Suffice to say the guys went down very well with the Green Door Store crowd during their seven tune set. I really hope that they keep on the case!

Rubber Jaw setlist:
‘Sick And Tired’
‘Drone’
‘Get Out Of It’
‘Feeling Funny’
‘Lost In The Noise’
‘Freaking Out’
‘Hymn To Say Goodbye’ 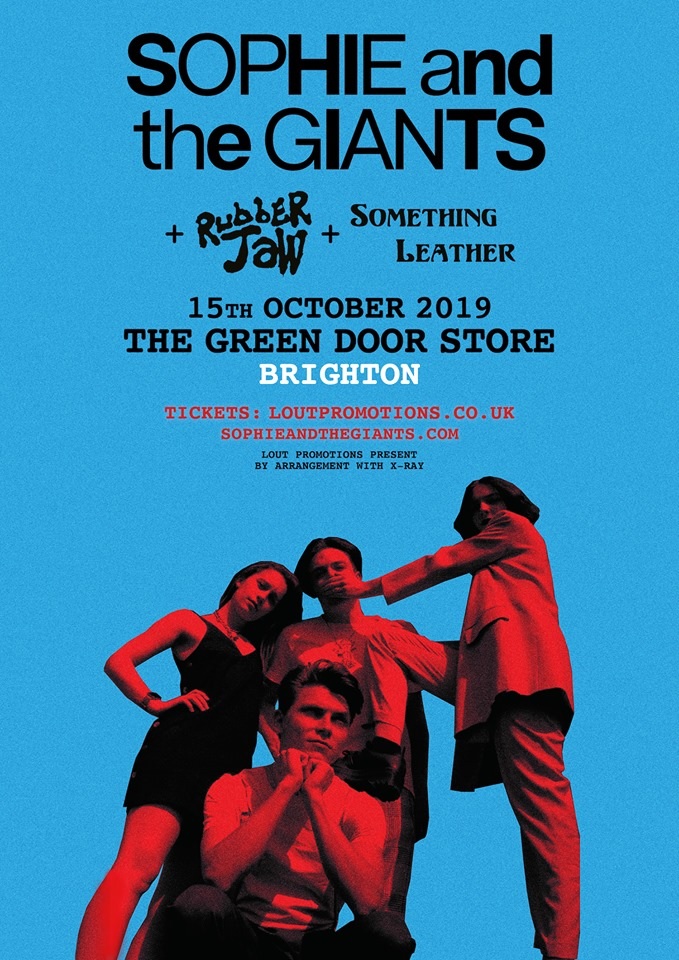 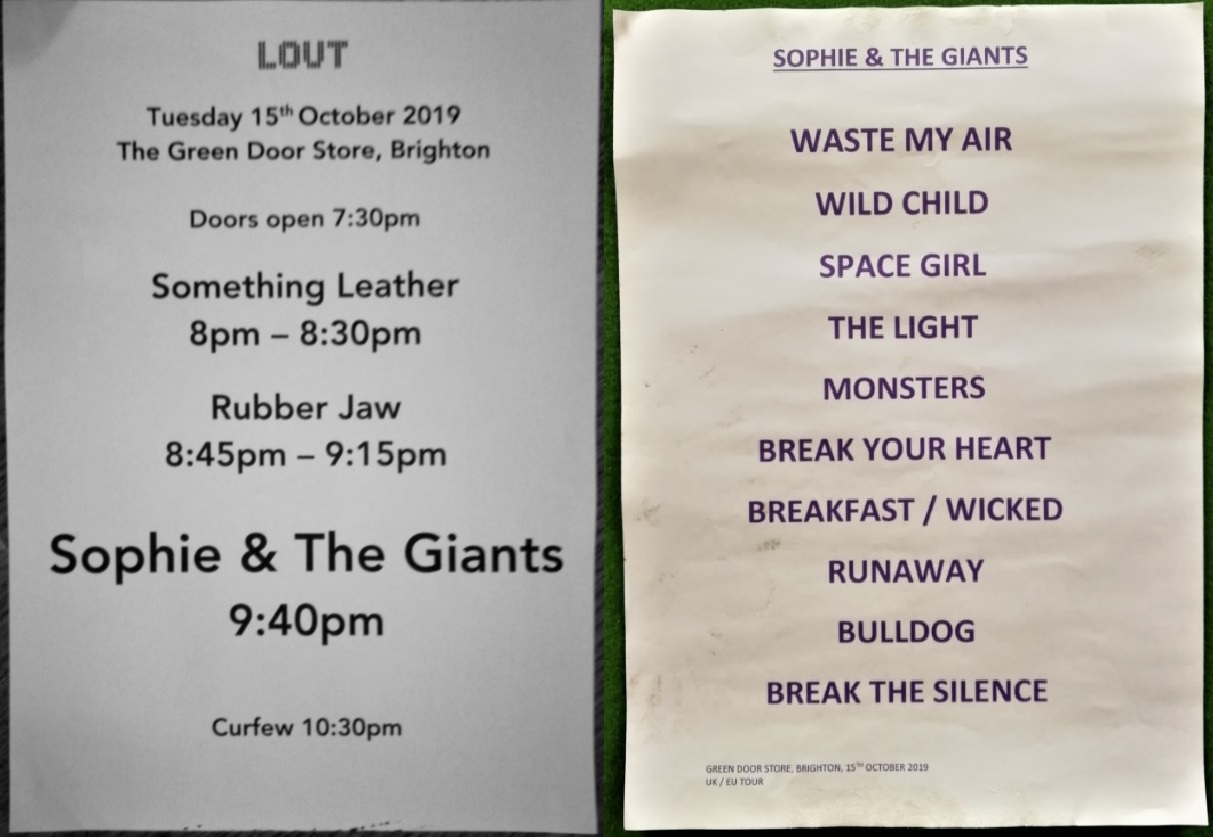