Chastity Belt preserve their faithfulness to their Brighton fans 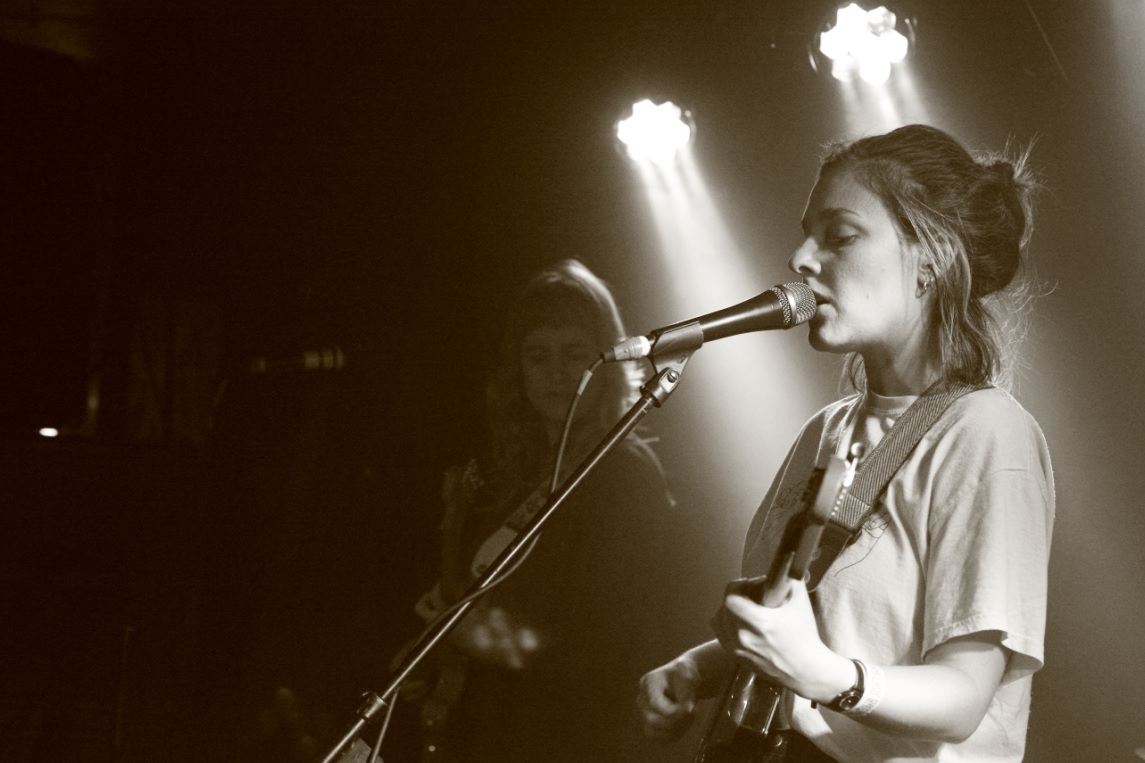 Acclaimed Seattle quartet Chastity Belt were back in Brighton tonight, in order to promote their latest ‘self titled’ album, which dropped on September 20th via Hardly Art – order it HERE. It is their fourth long player and this evening they performed no less than eight of the ten tracks from it to their faithfully gathered crowd at Patterns, which is located a stone’s throw from Brighton Pier.

Chastity Belt’s personnel are Julia Shapiro (vocals, guitar, drums), Lydia Lund (vocals, guitar), Gretchen Grimm (drums, vocals, guitar) and Annie Truscott (bass) and they have been on the case for virtually a decade. Their Patterns concert was date seven of nine (nothing to do with Star Trek!) on their UK tour and they informed us punters that they always enjoy coming to Brighton. 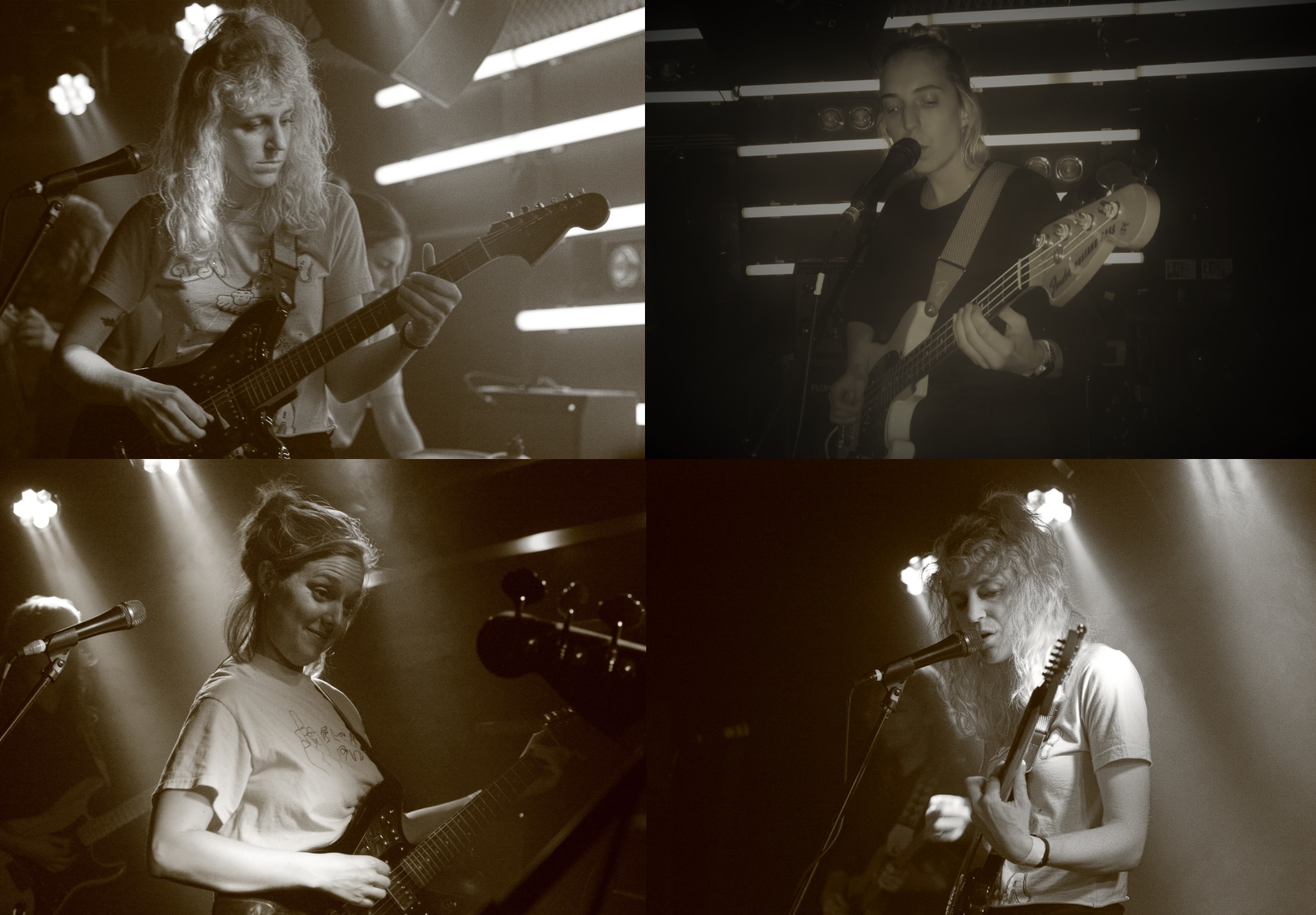 They were here in 2017 when they were plugging their then current ‘I Used To Spend So Much Time Alone’ record. But the new self-titled album sees them adding more dynamic vocal harmonies, sharing lead vocals on different tracks, and working with different instruments such as violin (played by Annie), cello, trumpet and keyboards. It makes for an intricate yet uncluttered record that is not only a product of, but a series of reflections on what it means to take what you need, and to understand yourself better. It is some of their most mature, most introspective and nuanced material to date – unhurried, thoughtful and poignant.

For tonight’s performance, it was just the usual two guitars, bass and drums, but it worked rather well I thought. Obviously we were served their trademark dreamy harmonies which were delivered in an unhurried way, so as to escape the realities of the big wide world. My colleague, had witnessed their previous performance in Brighton and recalled that their material performed then was a tad more upbeat than this evening. If they were strolling to a bus stop and the bus passed them, then I couldn’t imagine them running for it. They would chill out and utter that another one will be along soon, rather than freaking out and legging it in order to try and get aboard.

Julia and Gretchen swapped instruments (drums and guitar) a couple of times during the concert, which I found refreshing. But they are so laid back, the direct opposite of Spain’s Hinds, who are another decent four girl quartet. Therefore my standout track from Chastity Belt this evening was always going to be an uplifting tune, and my choice goes to the opener from their 2017 ‘I Used To Spend So Much Time Alone’ album, namely ‘Different Now’ – enjoy their official video for it HERE.

For more information on the band, visit their website www.chastitybeltmusic.com and check out their Bandcamp page too.

First up this evening were Brighton based slacker indie rockers, Sad Girls Club, who were originally called ‘Islands’, but changed their name back in 2015. They used to be a quartet, but with the departure of Craig Collins, they streamlined themselves into a trio consisting of Syd Spencer, Ruari Bissett and Zach Spencer.

The crowd appreciated their set this evening, which I would liken to a quirky off-key sound akin to several John Peel show bands back in the late ‘70’s and early ‘80’s. It had elements of The Mo-Dettes, mixed in with the understated charm of latter Jonathan Richman & The Modern Lovers. I felt that they were a band still learning their craft and was thus work in progress, especially their massacre of Britney’s ‘Toxic’, which amused the punters, but really didn’t fit in with the rest of their set. Their final number was the highlight, especially the PiL style bass intro and can be located on their ‘‘97 EP’, which came out in January. Listen to their work on their Bandcamp page.

Next up were an unpredictable quartet going by the name of Gang, who informed us they are based in Margate, Kent. They were certainly no strangers to Chastity Belt as they had previously supported them in Brighton back on 13th September 2017 up at the Green Door Store.

Tonight their disjointed and overindulgent musical drawl, went down reasonably well with certain elements of the mixed age crowd, who were psyching out to their continuous sound, which was more than likely their latest 31 minute single ‘As Bridgette Bellows From Her Lair, Bernard Becomes The Wicker Chair’. I on the other hand hadn’t partaken of any magic mushrooms maaaan and so was unable to grasp exactly what they were endeavouring to achieve, and thus found myself grinding my teeth in anxiety during their set. Maybe that was the whole point and I was supposed to, but in summing up, I would like to repeat the drummers message to us “We are the punchline to our own joke”.

They have a Bandcamp page. 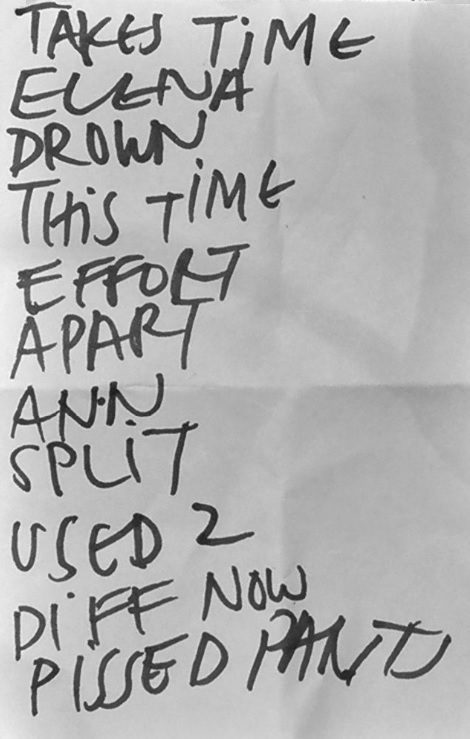 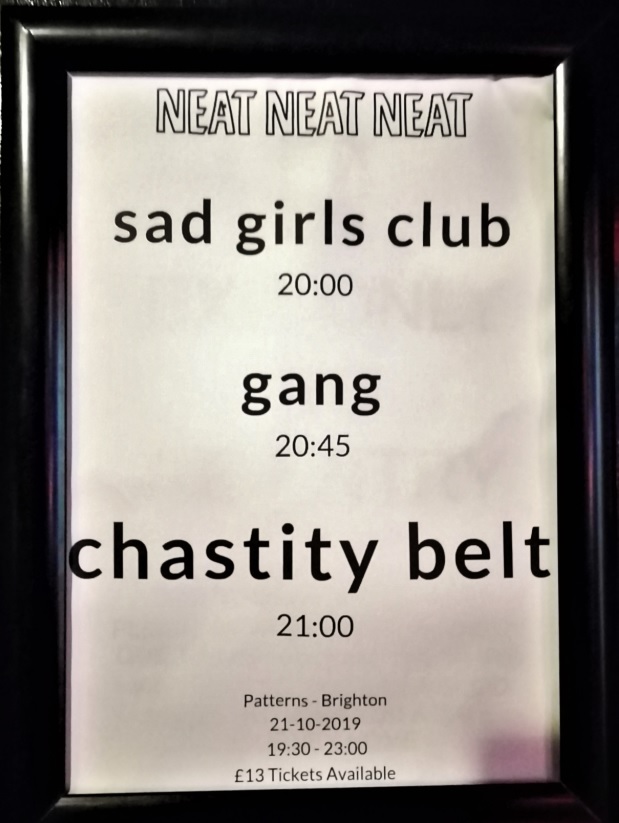 Running order, although Chastity Belt obviously came on at 21:30pm.