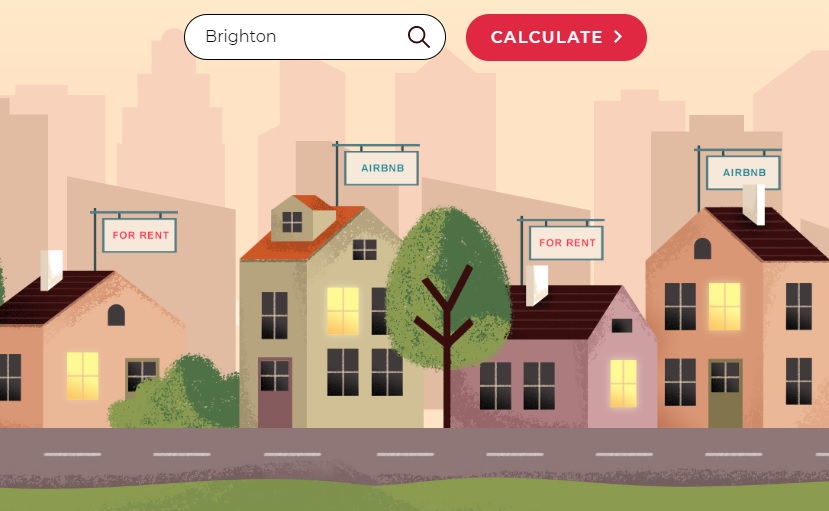 A new tool highlighting how much more rent landlords can make by letting to holidaymakers via Airbnb instead of to families has been criticised by councillors.

The online rental return calculator, based on landlord surveys, says that the average monthly income from renting a property in Brighton is £1,375, whereas landlords make on average £2,241 a month from Airbnb.

The calculator, created to promote bespoke blinds company Thomas Sanderson, only gives these two figures for a range of cities in the UK – although a spokesman for the blind company said “complications” such as the risk of breakages and more hands on management could offset the higher yield.

But no mention was made of how Airbnb is distorting local housing markets, which has been a hot topic in Brighton and Hove where it’s estimated 2,000 homes are listed as holiday lets.

Labour councillor Jacqueline O’Quinn said: “I find this type of on- line tool deeply disturbing as it means taking rentals out of the long-term rental market and making them short-term i.e. holiday lets.

“This has a negative impact on the city as we need to be able to offer long-term accommodation to those who live and work here.

“Airbnb have approached friends of mine about short-term rentals, telling them how much more they could let their houses out for. Also stating that if there are parties e.g. hen parties, all the clearing up, damage etc. will be taken care of.

“My friends decided they’d rather not upset the neighbours in the street where their house was.

“We need legislation and regulations to ensure that Airbnb and other short-let holiday company’s don’t distort the rental market in tourist destinations.”

Green councillor Martin Osborne said: “A lack of affordable housing in Brighton and Hove means we have one of the most acute housing crises in the country.

“This new calculator works directly against plans to alleviate this crisis by encouraging landlords to switch to short-term, ‘holiday’ lets rather than offering a longer tenancy, potentially draining the private rented sector of available homes.

“We are concerned to see the survey showing that 40% of landlords are considering switching from long-term residential tenancies to these short-term holiday lets.

“The rise of short-term holiday lets poses serious challenges to our city’s housing supply – and also affects the traditional visitor accommodation providers in Brighton and Hove such as hotels and guesthouses.

“On top of this, fire, health and safety standards in these type of properties are not required to match what we expect from hotels or longer term tenancies.

“Greens have consistently called for tighter regulation of short-term holiday lets because we want to ensure that the needs of the local tourist economy are balanced with the shortage of housing supply.

“We have repeatedly called on the Government to charge business rates to those making a profit out of renting entire properties as short-term holiday lets.

“With our city in the midst of a housing and homelessness crisis, housing must be viewed as a home – not just an asset used to maximise profit. To manage the need for affordable housing in the city, we urgently need secure, long term tenancies for those who have to rent.

“We call on the app designers to consider what consequences promotion like this may cause on the availability and affordability of housing in Brighton and Hove.”

Richard Petrie, Marketing Director of Thomas Sanderson said: “This tool is not designed to encourage landlords to stop renting long term, we noticed the high prices Air Bnbs charge and decided to look into this, although we discovered the monetary rewards are potentially greater for Air Bnb rentals, they carry more risk and more work than traditional renting and therefore require a totally different approach.

“It is also interesting to note that in London you are worse off if you rent out on Airbnb compared to long term renting, which is surprising as it is such a tourist hub.”

The rates were based on a survey of 450 landlords over the age of 18 in December last year.