Dan Harris’s Facebook post of his namebadge from the Sicily trip, which says he’s there with the city council

Questions have been raised over how a campaigner who regularly harangues councillors and council staff was flown to Italy to take part in a council-supported EU project.

Dan Harris hit the national headlines in 2017 when he was suspended from the Labour party for alleged anti-Semitism after posting a picture of three non-Jewish councillors he regularly criticised on social media with their faces transposed onto dancing rabbis.

By that time, he was already well known to councillors, council officers and contractors who complained about his aggressive approach to advocating for homeless people – an approach which at one stage led the council to refuse to work with him.

But despite this, last year he was selected as one of four members of a group set up by Urbact – a European knowledge-sharing project supported by a council-funded officer – who were flown to Sicily to take part in a conference there.

At the time he posted on Facebook he had been inspired by the conference to step up his campaign against the sale of a community centre to the city council which wanted to build social housing there – including new community space.

As a result of a stormy campaign, in which Mr Harris has flung serious allegations against the centre’s trustees and staff while providing no evidence to back up his claims, the council announced last week it was pausing its plans for housing there.

After raising these issues with Mr Harris, he blocked the journalist on social media and later posted a video accusing Brighton and Hove News of taking backhanders from one of the trustees, Councillor Mary Mears. No evidence has been provided for these claims either. 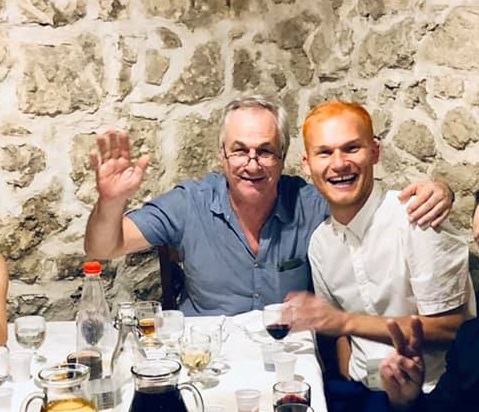 Dan Harris on the Sicily trip

Councillor Mears said: “It’s really concerning that nobody can make a comment against Dan Harris because if they do, they are verbally abused and so it makes it very difficult to have proper communication around resolving this with residents.

“It’s concerning that council officers are not just excusing but condoning his behaviour.

“It’s such a shame that as a result of Dan Harris’s campaign, trustees we can’t have a proper dialogue with residents without all these serious and completely unfounded allegations that are being bandied about.

“The community should be able to to have a proper consultation and dialogue but unfortunately with this campaign, that isn’t possible.”

Former councillor Caroline Penn, one of those featured in the anti-Semitic video, says Mr Harris has never apologised to her for posting it.

She said: “Over a number of years, Dan Harris has harassed, bullied and smeared not only elected members but council officers and members of the public who have challenged him.

“Dan Harris was also suspended from the Labour Party for antisemitism, for which caused a great deal of distress, for which he never apologised.

“The council has a duty of care towards it’s staff and elected members. As a signatory of the IHRA it also has a duty to stand against anti-Semitism.

“I would question how tax payers money came to be used in this manner. And I hope both councillors and officers will learn lessons to prevent it happening again.”

Former council leader Warren Morgan, another of those featured in the video, said: “When I was leader of the council I made no trips abroad at the taxpayers expense, there just isn’t the money to fund that any more.

“To find out that someone who not only isn’t an elected Councillor, but a person who engaged in nationally-highlighted antisemitic activity and subjected me to regular public abuse, is frankly appalling.

“Serious questions need to be asked at the highest level as to why this person was paid for by the council to go on this trip abroad, and what his political and factional allegiances had to do with it.”

Brighton and Hove News understands that councillors were warned about his behaviour in early 2017, and that a homeless campaign group he formed, Ethrag, was told officers would not engage with it while he was a committee member.

Most recently, he has been a leading figure in the Save the Valley Social Club campaign, and has publicly accused trustees of Whitehawk and Manor Farm Community Association, which runs the centre, including Councillor Mears, of corruption.

Last month he was part of a group of residents who attempted to stop a meeting to dissolve the association by holding a vote of no confidence and electing new trustees.

Amanda Bishop, who has also been suspended from Labour for anti-Semitism after calling on members to march to Hove synagogue in protest at a candidate’s suspension – also for anti-Semitism – took over chairing the meeting.

However, the existing trustees say that the association currently has no members, which has been the case since the centre’s bar closed in 2012.

The meeting was halted when the residents refused to leave at the request of trustees, and police were called. The trustees then went on to vote for the charity’s dissolution.

In a video posted on YouTube of the meeting, two council officers are seen to be present, and one approaches Mr Harris to ask him if he has a copy of the constitution at the end. The council says both were there as observers.

At issue is the wording of clause 4 of the association’s constitution, which reads: “Individual membership shall be open, irrespective of political party, nationality, religious opinion, race or colour, to a) all persons aged 18 years and over living in the area of benefit who shall be called full members [clauses b and c for junior and associate members follow]”

Dan Harris and fellow campaigners argue this means anyone living in the area of benefit – the postcode area BN2 5 – are automatically members.

The trustees say that membership is open but not automatic to residents. A later clause says all member must pay subs – and no subs are currently being paid.

On the campaign’s Facebook page, run by Mr Harris, the snippet of the constitution which reads: “all persons … living in the area of benefit who shall be called FULL members” has been posted – but not the beginning of clause 4 which says this to whom membership is open

A council spokeswoman said Mr Harris’s participation had been decided by council officers working with the local community.

She said: “The project involves linking community groups and providing opportunities for volunteers to meet to share their learning for the good of all.

“Each URBACT partner is required to set up an URBACT Local Group (ULG) for residents and community activists keen to work together to develop their area.

“In Brighton and Hove, the focus has been on East Brighton where there are many community venues, public buildings and open spaces which are supported by a locally active community and could benefit further from this project.

“Mr Harris a member of the Brighton and Hove ULG. ULG member’s views are their own and they do not speak on behalf of the local authority.”

According to budget papers seen by Brighton and Hove News, the council spent £31,130.71 on the project last year, of which £6,000 was spent on accommodation and travel to transnational meetings.

The council says about two thirds of this money comes from the EU.

The council says travel costs of £765.88 for each member, which included return flights, three nights of accommodation, transfers and subsistence, were paid out of EU money.