Gentleman’s Dub Club going down (in) a storm 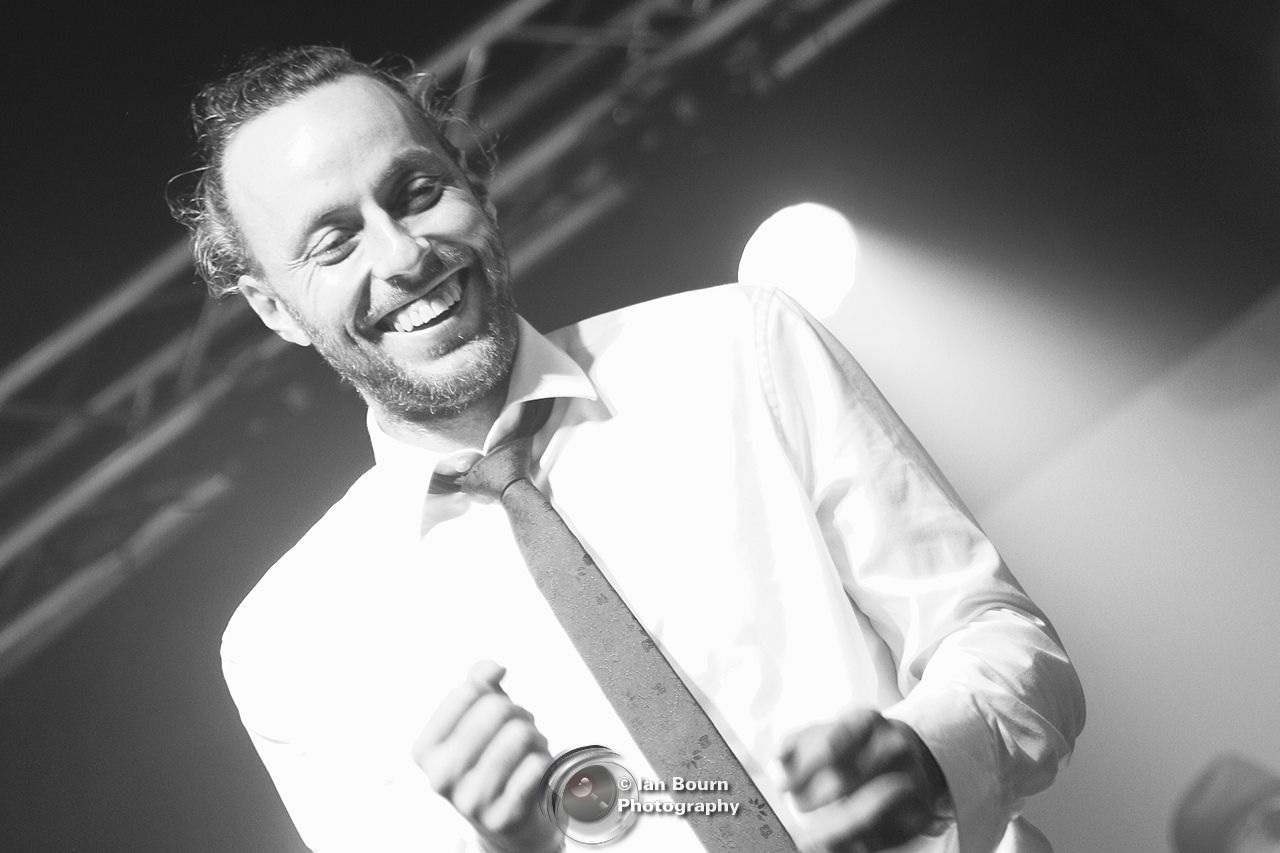 Gentleman’s Dub Club were back in Brighton this evening, but not at their usual annual haunt of the Concorde 2, but this time around they fancied trying a new venue, thus they are appearing at CHALK for the first time. Was this to be an ill omen?

There’s a storm raging outside, Dennis The Menace, was trying its best to wreak havoc across the country, but did this deter the gig going GDC faithful from turning up? Nah, of course not! CHALK had sold out tonight, which I’m sure most pleased busy local promoters LOUT and the venue, as well as obviously the acts. Turns out the only snag was “Unexpected issues with the cloakroom” after the performances had finished. I saved the hassle of that and wrapped my jacket and hoodie around my waist and made a speedy exit, although I lost my colleagues in the process. 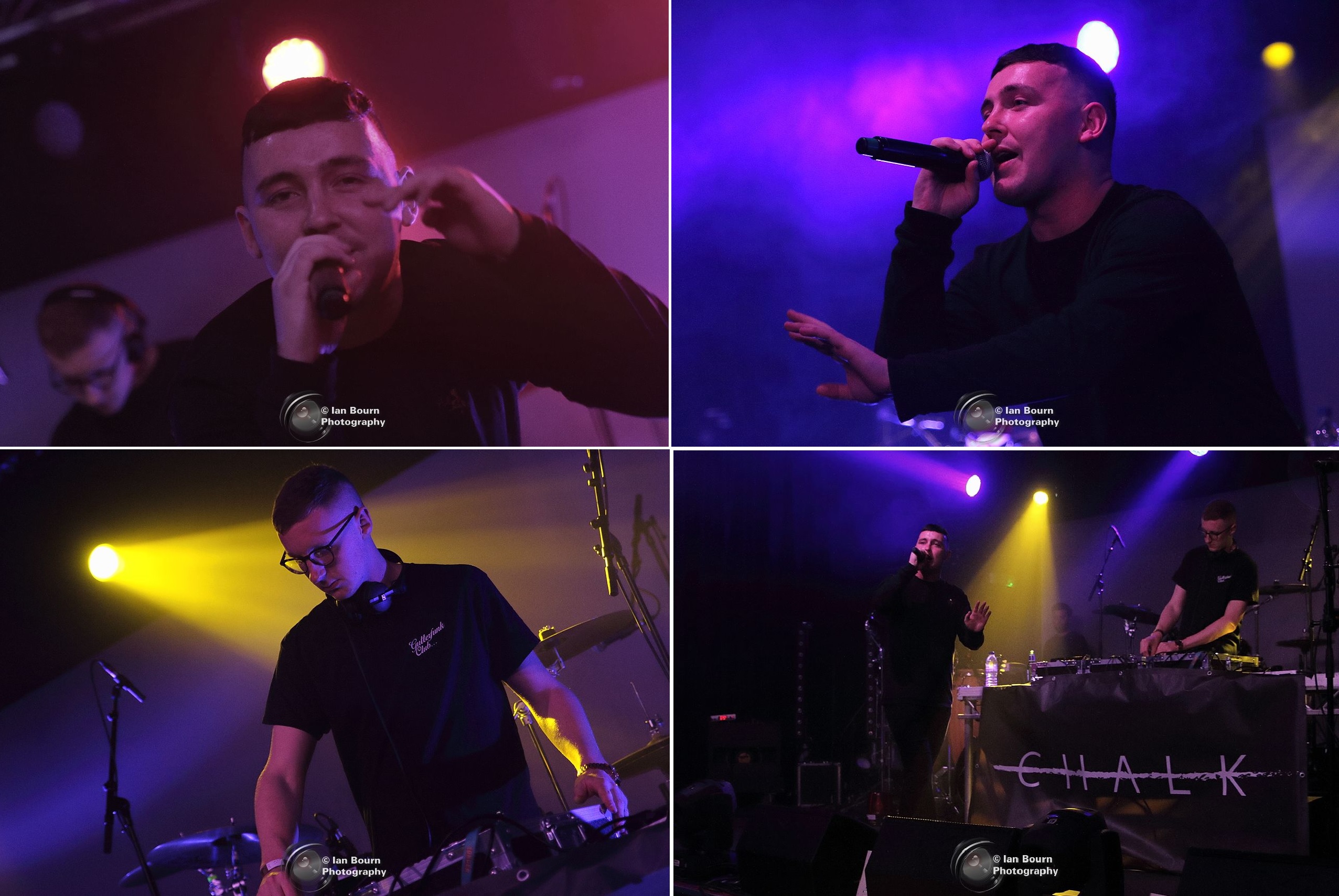 First up, the big bad sounds of compact young Bristol MC Luke Gardna, who is simply known as Gardna. He delivers a barrage of grime, dub and reggae to those gathered here this evening, with the assistance of his pal ‘on controls’ behind him. The cutz were offloaded at some considerable pace with a majority lasting around a couple of minutes, before we went off onto another direction. Gardna was most certainly full of the beans and an ideal warm-up act as he got the sold out crowd bopping along.

He may well be known to avid GDC fans, as he appears on their 2018 ‘Pound For Pound’ album with The Nextmen. He has recently in his own right released his debut solo 12 cut album, ‘Good Time Not A Long Time’, which most certainly stood out on tonight’s merch stand due to its bright red cover. Check it out on Spotify. 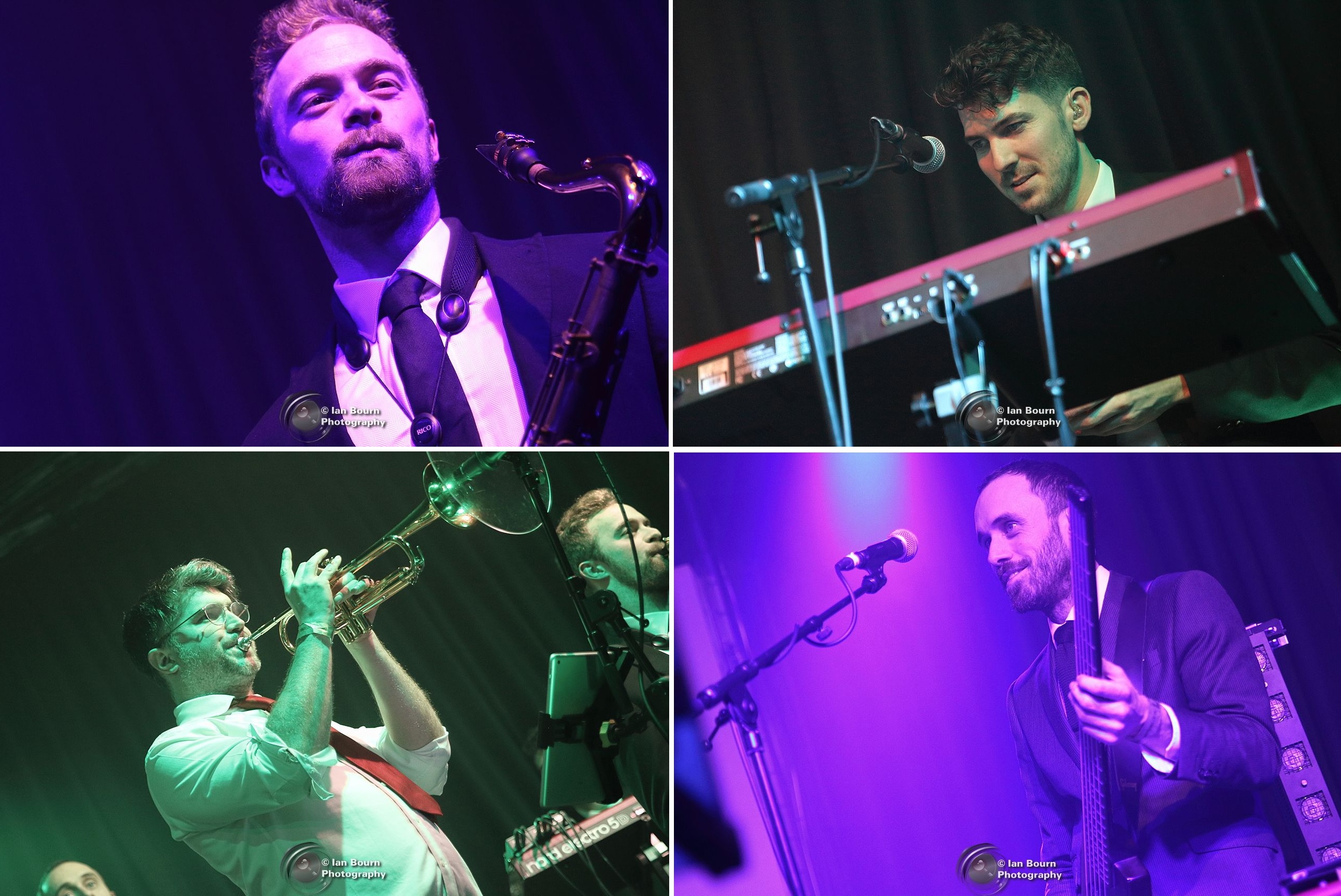 Since their formation in Leeds in early 2006, the now London-based dub collective Gentleman’s Dub Club have made a name for themselves as one of the most respected names in dub/reggae music. GDC have been on tour for nearly 14 years, and are festival favourites right across the UK and Europe, and have found themselves regularly playing to crowds of 10,000 or more. The Gents were returning to Brighton for another show as part of their 12-date ‘100%’ UK tour, in celebration of their latest EP which features the legendary Bitty McLean and was released in late November 2019. It was recorded at the Crosstown Studios in London, the B-side is their cover of the timeless classic ‘Summer Breeze’ by Seals and Croft.

With their unique take on dub music, and their prolific output, this has solidified their position as stalwarts of the UK dub/ska/reggae music scene This has seen them perform to vast amounts of people who came to see their set opening on the main stage at Boomtown festival, plus they have thrilled the crowds at Glastonbury, Bestival, Rototom, NASS, Latitude to name just a few. They are an uplifting band that gets the punters on side, so no wonder they performed a hugely successful set of dates supporting the legendary UB40 last year. That tour came to Brighton on 8th April – read our review HERE. 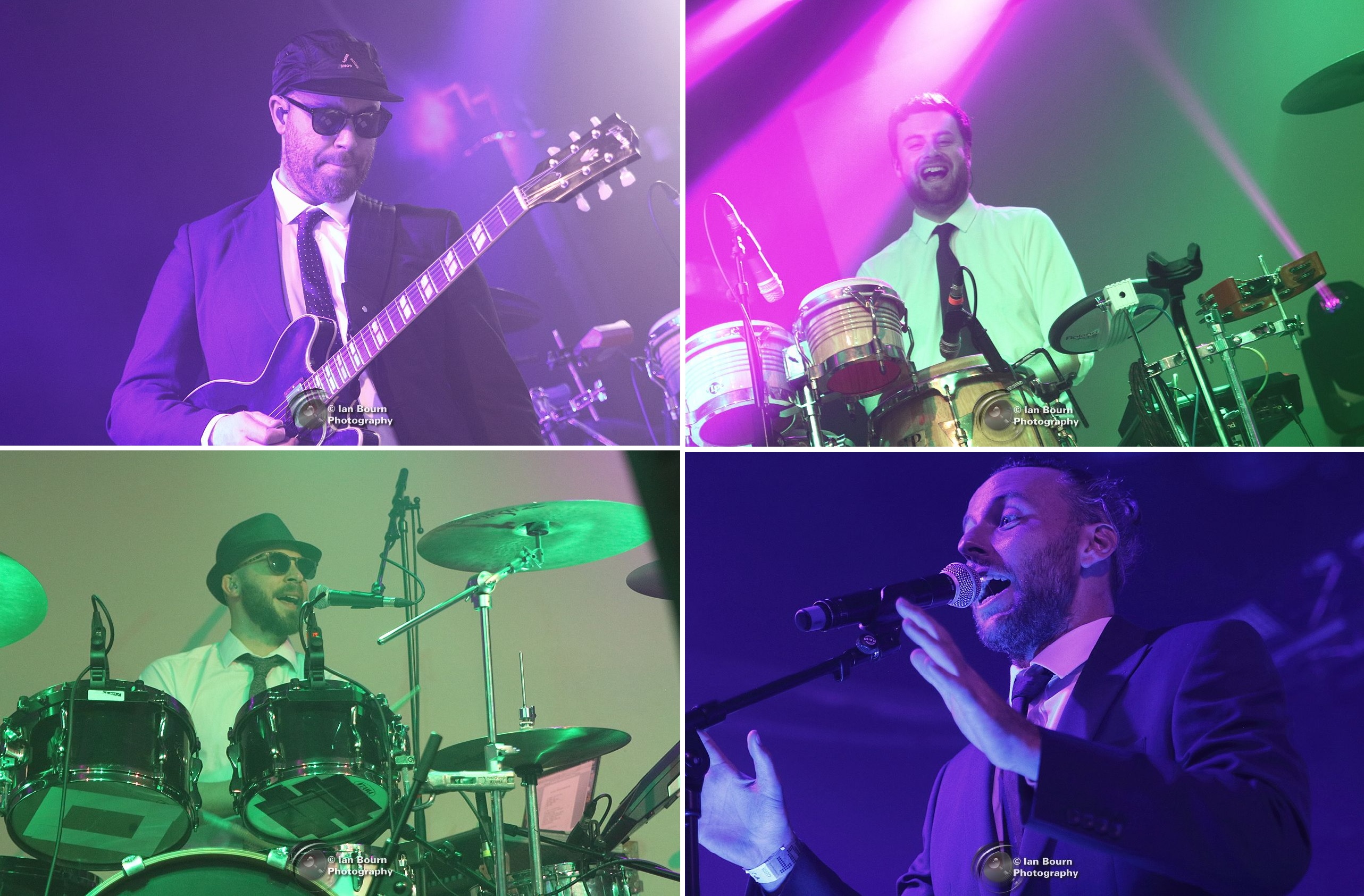 As usual, it’s really impossible not to be warmed by these guys and in particular their slender frontman Jonathan. Who I have to note was actually wearing brown shoes tonight. I’m sure that every other time I have witnessed GDC, he has performed in black socks and no footwear. Maybe he’s worn them all out from jumping around the stage? He was sporting a man-bun as well this time around.

The CHALK sound system was certainly making their equipment appear rather crisp. You could clearly hear the Nord Stage keyboard, congas, drums and especially the trumpet and sax. I’m sure the band was most pleased with this.

Before long it was time for their latest single ‘100%’, which on the recorded version has Bitty McLean on vocal duty. No Bitty tonight and so some improvisation was had. Drummer Tommy Evans came into the limelight and sang rather well. His vacant drum set position was filled by Niall from percussion and Niall’s job was taken on by one of their roadies.

After a while Gardna was back on stage with the guys. He had matching attire white shirt, black trousers and so on. They launched into ‘Raised On The Amen’ and ‘Rudeboy’, both from their 2018 ‘Pound For Pound’ album. Thus the vibe was ramped up somewhat and Gardna’s inclusion secured that we had ventured into drum and bass territory at 100mph.

After this, it was a nice touch for vocalist Jonathan to inform the crowd that he grew up near Brighton and that his dad and sister were in the house!! I’m certain they were having a ball as everyone was.

The octet briefly vacated the stage and Jonathan returned, eventually being followed by his chums and they launched into ‘Let A Little Love’ from their excellent 2017 ‘Dubtopia’ album. The final number being crowd fave ‘High Grade’ which was given various treatments including a dub version. It was 9:56pm and that was the small onion – “That’s shallot”! 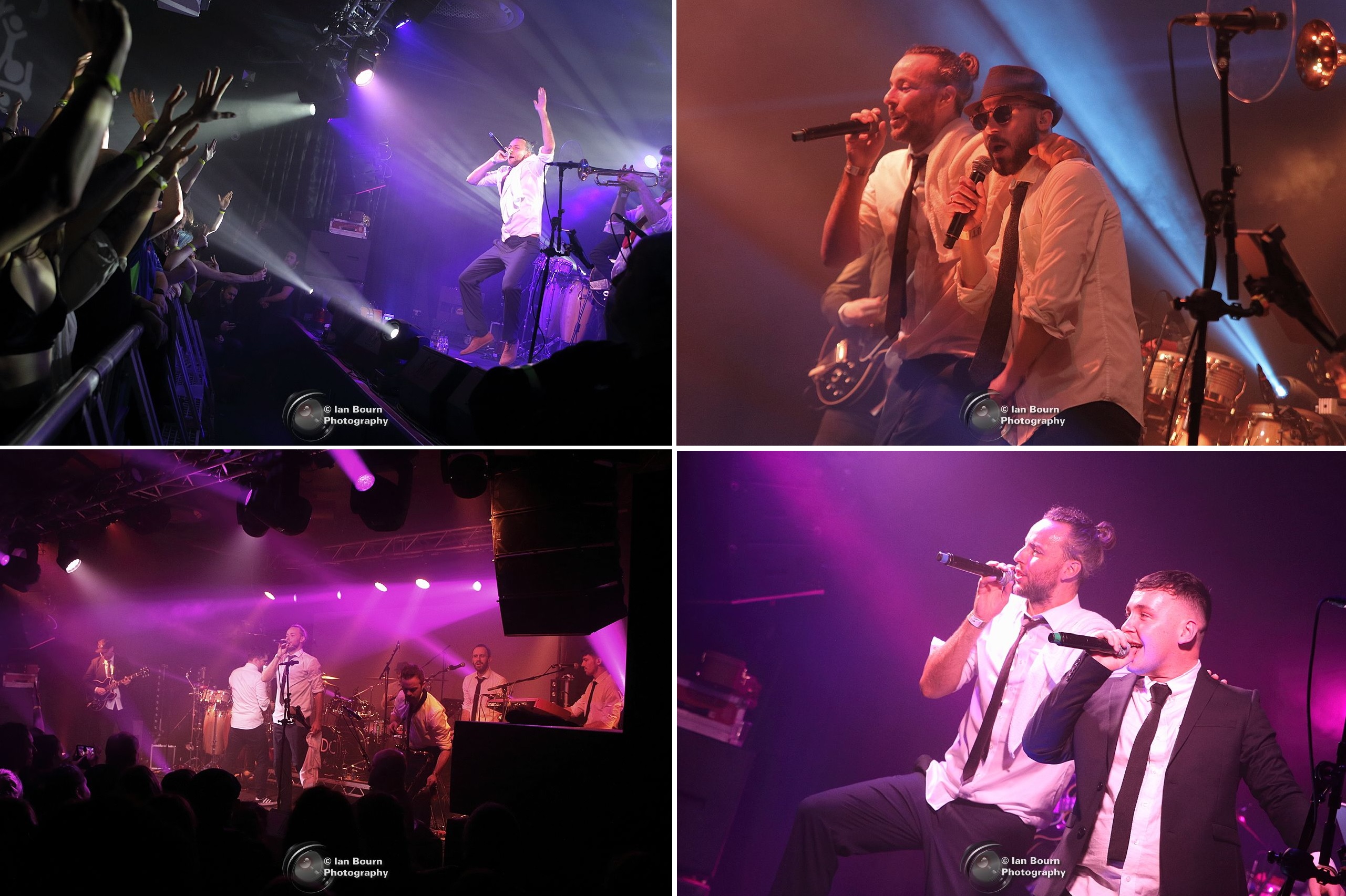 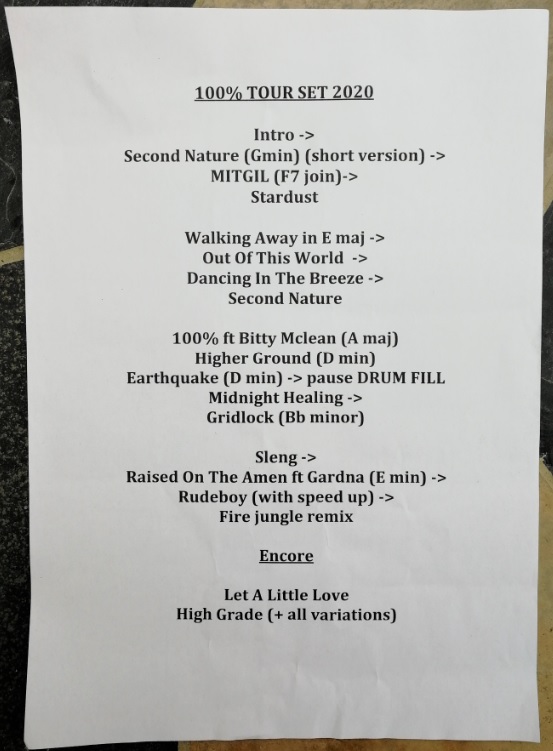 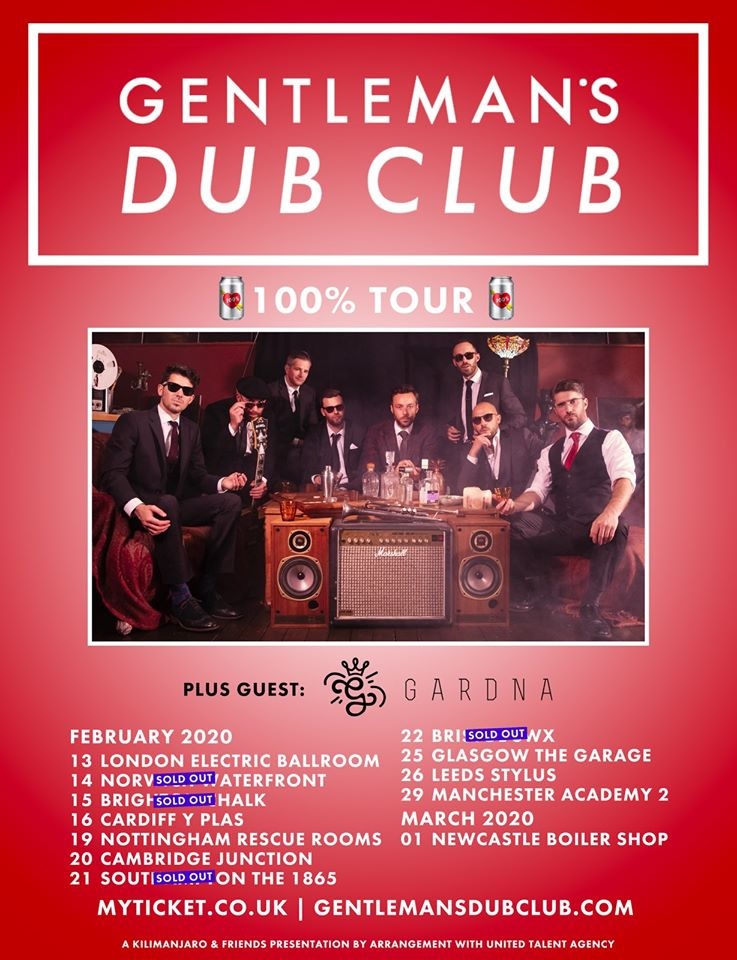