A shoplifter who stole champagne from a supermarket has been sent to rehab while another, who took vitamins from an organic and wholefoods specialist, has been banned from the centre of Brighton.

The pair were among four Brighton and Hove thieves targeting local stores who have been tackled by Sussex Police, the force said.

Brighton’s champagne shoplifter lives in Buckingham Place but has been warned that he will become a guest of Her Majesty if he offends again in the next two years.

Nathan Boughton, 33, of St Anne’s House, Buckingham Place, Brighton, was arrested after being caught with stolen bubbly worth £126 at the Brighton Marina branch of Asda last month.

The day before he stole bottles of booze priced at £324 from Asda in Crowhurst Road, Hollingbury.

He was also charged with targeting the Asda at The Quintins, in North Street, Hailsham, in the autumn.

Brighton Magistrates’ Court was told that he had stolen goods worth £532.79 including razor blades, clothes, candles, alcohol and Nesquik.

Boughton pleaded guilty to theft and District Judge Amanda Kelly sentenced him to prison for 12 weeks suspended for two years.

She said that his offending warranted custody because it was so serious and that he had “an appalling record of previous convictions and high value thefts”.

Broughton, who has a drug addiction, was sent to rehab at Richmond House, in Richmond Road, Brighton, for a six months of outpatient treatment with CGL (Change Grow Live).

He was also told to attend a thinking skills programme and to pay compensation totalling £200 to Asda.

Brighton magistrates ordered Swan to pay compensation of £74.45 to be deducted from his benefits. 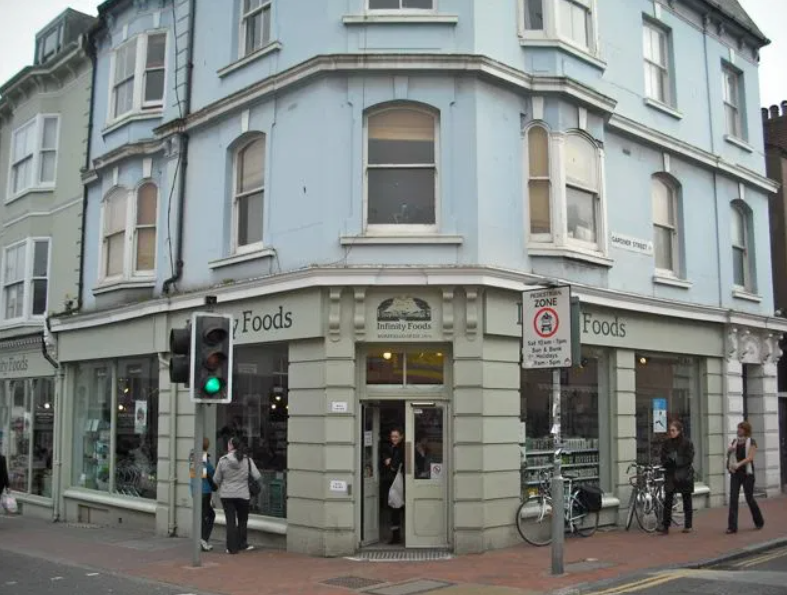 Infinity Foods in North Road, Brighton, on the corner of Gardner Street

Sussex Police said: “As a result of his persistent offending, Swan has a community protection notice (CPN) issued against him which prohibits him from being in Brighton town centre.

“He can be arrested if he breaches it.”

Another persistent thief Nigel Holland, 51, was arrested after several reports of theft from three different Greggs bakery stores in the centre of Brighton.

When he was arrested – after thefts were reported from the North Street and Queen’s Road branches – he attacked PCSO Daniel Proctor.

Holland, of Regency Square, Brighton, admitted the charges and Crawley magistrates sentenced him to 10 weeks in prison suspended for 18 months.

Sussex Police said: “Holland was charged with four thefts and assaulting a police community support officer when he was arrested.

“He was remanded and appeared at Crawley Magistrates’ Court where he admitted the offences.

“Holland was given a suspended prison sentence and 50 hours unpaid community work.

“He has also been given a community protection notice (CPN) last month which banned him from areas of central Brighton and he has not been reported by Greggs stores for any stealing since.”

A fourth shoplifter, Daniel Kadlec, also known as Daniel Kablek, was fined for three separate offences of stealing from Co-op stores in Hove. 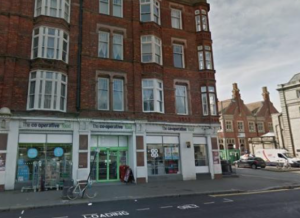 The Co-op in Church Road in Hove

Kadlec, 38, a homeless Czech, formerly of the Grapevine Seafront Hostel, in King’s Road, Brighton, close to the corner of Middle Street, has had problems with cocaine and heroin.

He stole food worth £41 from the Co-op in Western Road, Hove, and eight bottles of wine and a box of chocolates worth £65 from the branch in Church Road, Hove.

Sussex Police said: “He was charged with these offences and released on bail with conditions not to go to the Co-op.”

But he went back to the Co-op opposite Hove Town Hall and stole seven bottles of wine worth £49.

At Crawley Magistrates’ Court he pleaded guilty to three counts of theft and was fined £40 for each offence, making £120 in total.

He had no means to pay and the bench ordered that he be detained in the courthouse. His detention was deemed to have been served because of the time that he had already spent in custody since his arrest.

Sussex Police said: “Sussex Police have been working with businesses across the county to take action against those stealing from shops and put measures in place to deter it from happening.”

Force business crime lead Chris Neilson said: “We will pursue those who persistently target and steal from our local businesses regardless of the value and type of goods.

“It is not a victimless crime and impacts on local businesses and their customers.

“Shop workers who are there to help their customers should not suffer abuse, threats and even assault from those who believe it is acceptable to steal on a regular basis.

“We will continue to work in partnership with businesses to bring those that behave criminally in such a way to justice.”

Sussex Police said: “It brings together Sussex Police, local and national retailers and other interested partners to tackle the root causes of business crime, encourage swifter reporting and find better ways to work together to catch and punish all prolific offenders.”

Mrs Bourne said that she was pleased that Sussex Police now worked more closely with local businesses and took greater action to target persistent offenders in our high streets and shopping areas.

She said: “I am determined to find better ways of targeting offenders who continue to blight our business communities and, working with the SSBP, to find innovative ways of reducing the impact of these crimes.

“This type of rigorous investigating is exactly what local businesses have told me they want to see. It sends a strong message to criminals who wish to exploit our retail sector that they will be reported, caught and punished.

“It also helps build confidence among our local retail sector that appropriate action will be taken by Sussex Police to protect them, their livelihoods and their customers.

“Sussex Police recognise that theft is a crime that should receive an appropriate response and there is no minimum monetary threshold applied to what will, or will not be, investigated.”