Police filmed a dangerous driver from Hove who has been jailed after leading them on a high-speed car chase through Worthing.

Alan Gale, 38, formerly of Wilbury Road, Hove, drove a grey BMW 5 series car at speeds of up to 80mph along 30mph residential roads in Tarring and Goring in wet and rainy conditions.

Gale, a landscape gardener who was already banned from driving, was hemmed in at one point.

Officers smashed his car windows with their batons and pepper-sprayed him to no obvious effect – and he managed to pull away again.

Gale was eventually found hiding in bushes in a back garden in Frobisher Close – and by the time that he had been caught, tasered and arrested, he had attacked four police officers.

He was jailed for seven months and banned from driving for 18 months by Judge Jeremy Gold at Hove Crown Court.

Sussex Police released footage of the chase as the force said that it “continues to crack down on motorists who risk the lives of themselves and others on our roads”.

Sergeant Chris Bryant, who led the pursuit, said: “His driving was reckless and dangerous, with no regard for life or limb.”

Sussex Police said: “Officers from the West Sussex Tactical Enforcement Unit were on proactive patrol on the afternoon of Saturday 25 July 2020 and spotted a vehicle of interest in the Tarring area.

“They turned around with the intention of speaking to its occupants, at which point the silver BMW made off at speed.

“It was pursued along Gaisford Road and through Tarring onto Terringes Avenue – a 30mph residential road – where it overtook a number of vehicles and reached speeds of up to 80mph.

“The driver then turned left into The Boulevard, where he undertook another car and knocked the wing mirror off a parked car before attempting to cross the grass verge on to the northbound carriageway, where it got stuck between the pursuing police vehicle and a tree.

“Other units arrived at the scene and officers used batons to smash the BMW’s windows. They used captor spray and Taser on the driver – by this point identified as Alan Gale, a landscape gardener, of no fixed address – but seemingly to little effect. 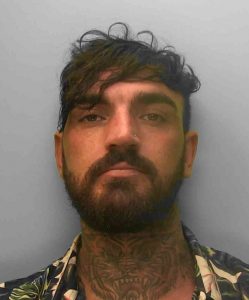 “The 38-year-old managed to escape and continued his erratic journey by heading north on the southbound carriageway – along a section of pavement – and then turned left into Palatine Road, where he crashed into a wall.

“A police car arrived beside the BMW moments later and Gale jumped across its bonnet and ran into the driveway of a neighbouring property.

“Following a short foot chase, he was safely detained.

“Gale was arrested and charged with driving while disqualified, dangerous driving, driving with no insurance and four counts of assaulting an emergency worker – relating to injuries sustained by officers as they attempted to prevent him from driving off when stuck in The Boulevard.”

Gale, formerly of Homewood, in Findon, was remanded in custody before sentencing at Hove Crown Court on Friday 23 April after pleading guilty to all offences.

He was jailed for seven months, banned from driving for 18 months and ordered to take an extended re-test should he wish to drive again. 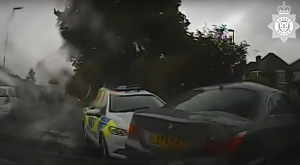 Sergeant Bryant, of the Tactical Enforcement Unit, who was one of the four officers attacked by Gale, said: “In my 13 years as a police officer, I have experienced numerous vehicles failing to stop and attempting to flee.

“However, I have never seen anyone with the same level of intent and extreme desperation to get away as Gale. His driving was reckless and dangerous, with no regard for life or limb.”

“This case demonstrates that we will continue to take action against those who misuse the roads, and in particular those who commit the ‘fatal five’ offences – speeding, drink/drug-driving, mobile phone use, not wearing a seatbelt and careless driving – as we strive to reduce the number of fatal and serious injury collisions.”