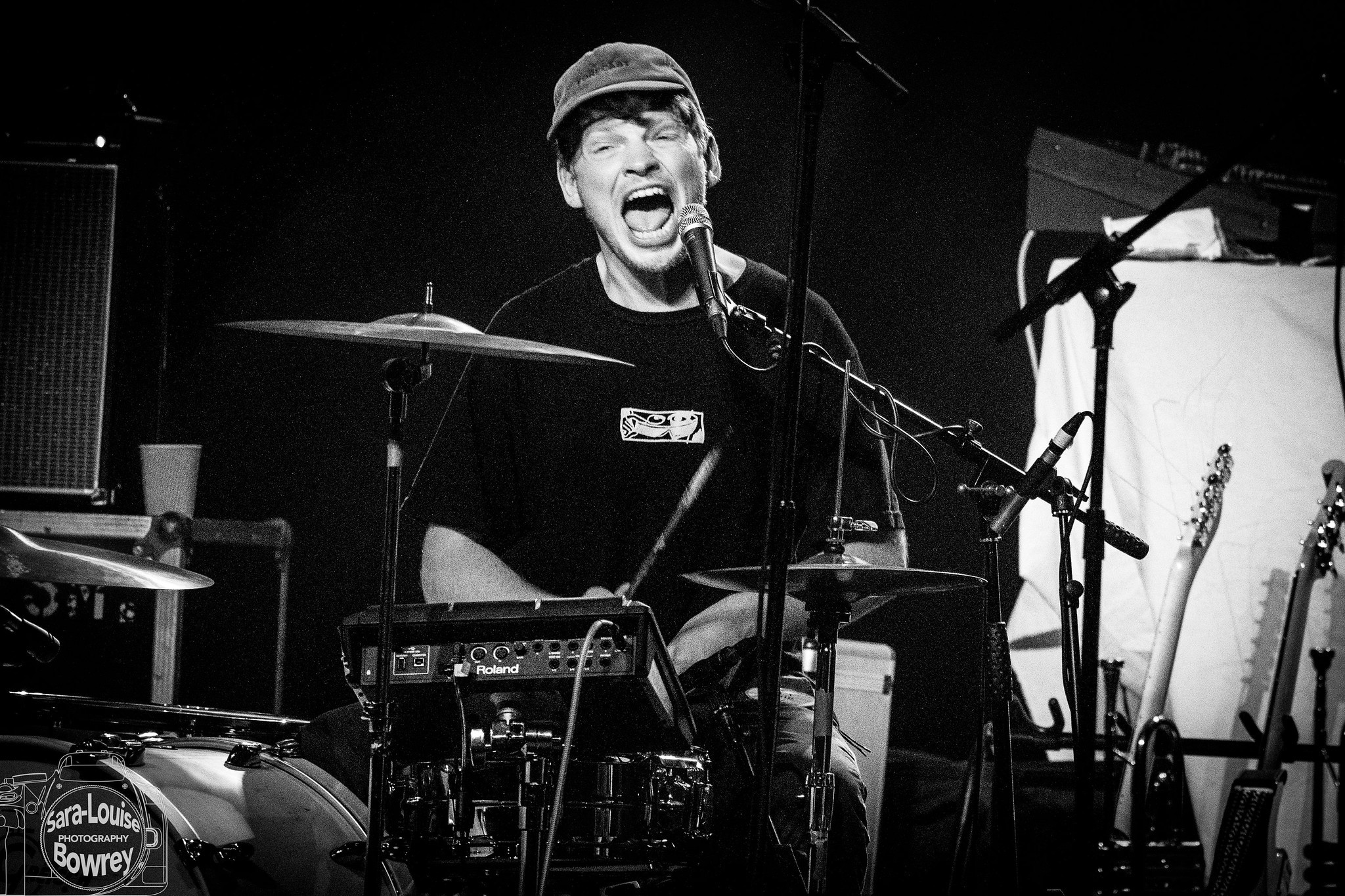 Formed in Brighton in 2017, Squid have forged an impressive reputation with their genre-defying experimental sound. Although often considered alongside the current post-punk movement, they utilise a more expansive approach, incorporating elements of prog, free jazz, and Krautrock into an ever-shifting sonic soundscape.

Their long-awaited debut album ‘Bright Green Field’ was released to widespread acclaim on 7th May 2021, and an extensive autumn tour is planned to promote it, including Brighton’s Concorde 2 on Tuesday 7th September – Purchase your tickets HERE. With pandemic restrictions still in place, the current ‘Fieldworks’ tour is being used as an opportunity to try out new material to socially distanced audiences in less obvious venues. The penultimate date of the run brings them to the iconic De La Warr Pavilion in Bexhill-on-Sea. 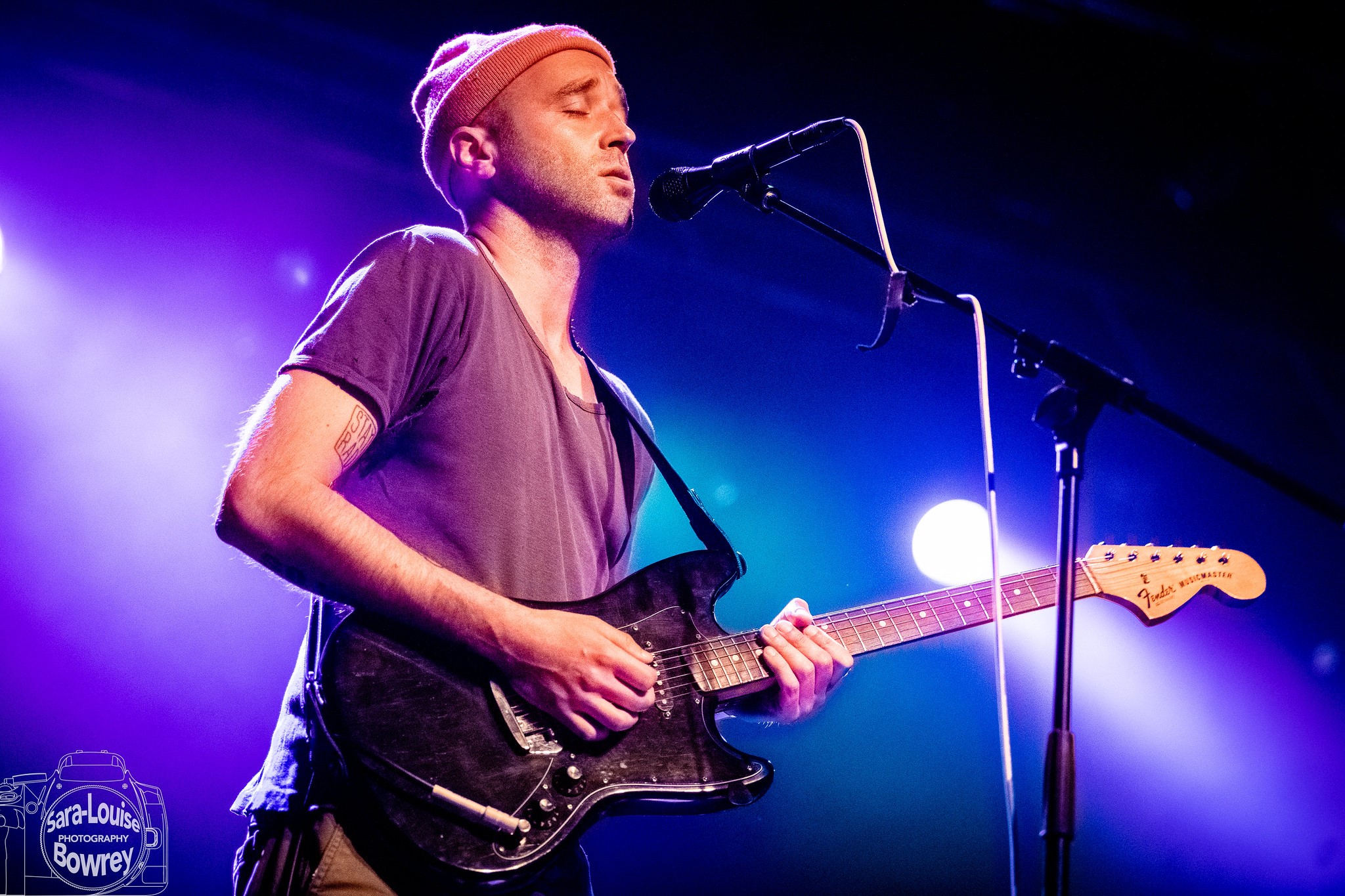 Support for this show comes from Brighton’s Laundromat, who as the alter-ego of songwriter Toby Hayes released the colourfully titled ‘Red’, ‘Blue’ and ‘Green’ EPs and picked up a bit of radio play along the way. Musically it’s a sort of psych-tinged alt-pop, vaguely reminiscent of Beck or Steve Mason. Tonight the act has metamorphosed into an actual four-piece band. House left is Toby himself, wielding a black Stratocaster and wearing an orange knitted beanie watch cap in the style of ‘The Life Aquatic With Steve Zissou’. Centre stage, on a kit with a tiny kick drum and an imposingly deep floor tom, Chris smiles knowingly beneath a black newsboy cap and monitoring headphones. Right centre is bassist Jimi, grooving on a sunburst Precision and sporting a retro moustache and trucker cap combo. House right, guitarist Tom wrangles effects-laden howls via a white Strat, a tiny keyboard and a Vox amp. He has broken ranks by going hatless.

The set is drawn from the colour-coded back catalogue, and is a most enjoyable listen, lilting along with languid grooves, infectious melodies and interestingly processed guitar sounds. Between songs Toby admits that this is only their second gig as a band, the first having been in a tiny pub room. The wide-open spaces of the De La Warr Pavilion must seem quite daunting by comparison. ‘Bug Eyed’ is a cracking piece, driven along by a bass riff with a weirdly funky delay effect. Set closer ‘Bureau de Fatique‘ is the stand-out number for me, with lovely sustained backing vocals and a pumping bass line, whilst Tom gets busy on percussion with a shaker egg.

Laundromat are due to play The Prince Albert in Brighton on Wednesday 11th August, and are well worth checking out. Grab your tickets HERE. 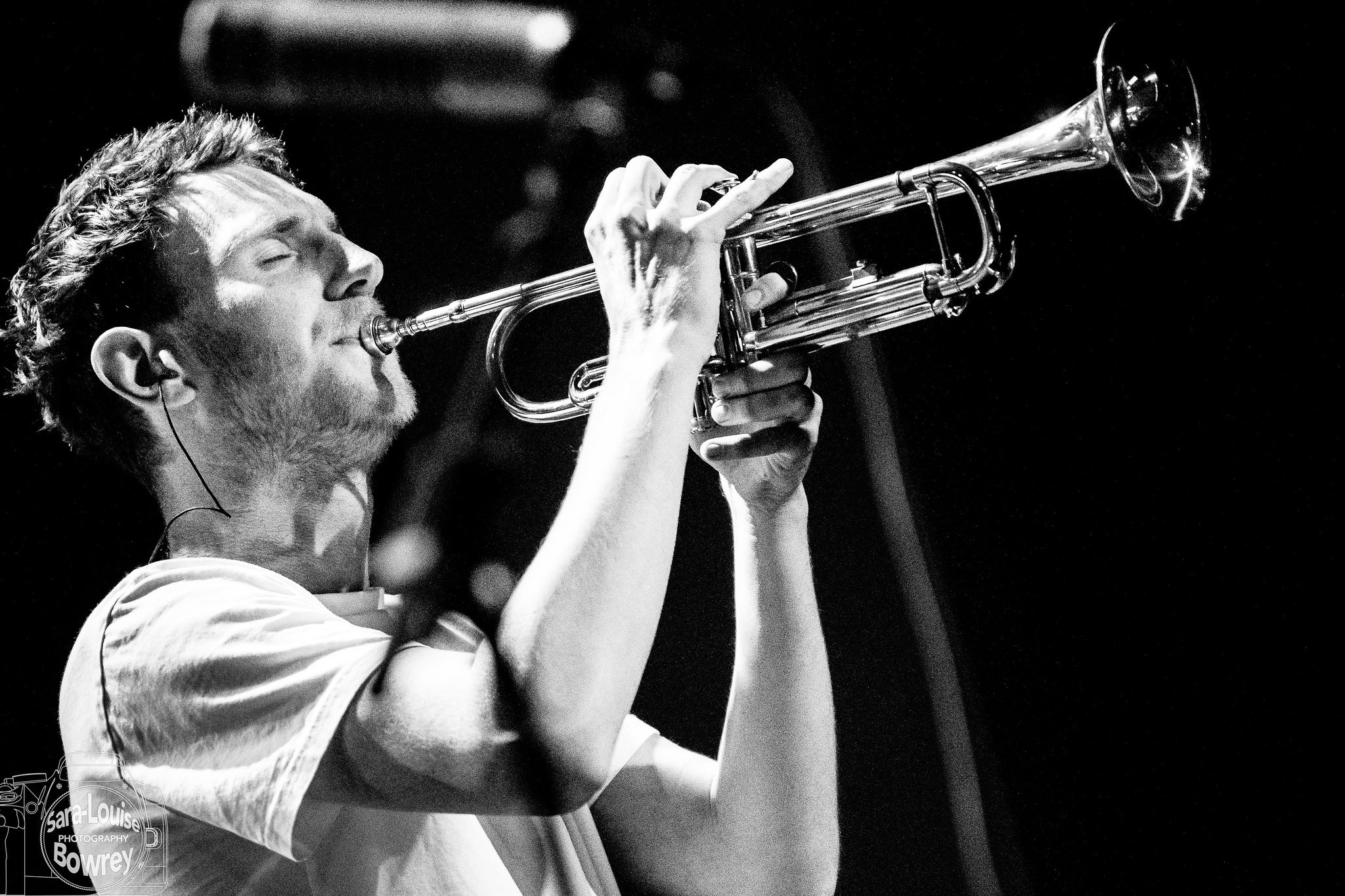 The audience in the large hall seems even more spread out than usual. I got the impression there was a limit of two people per ticket transaction, and isolated pairs of patrons are luxuriating at either end of long sofas in the distant gloom. Nonetheless, there’s a huge cheer when Squid come on.

The five-piece are set up in a line across the stage, with lead vocalist Ollie’s drum kit in the centre. An extensive array of instruments stands waiting to be called into action. At the rear, on a raised platform, is a table laden with retro synths, which Louis immediately heads for. Hunched over in a baseball cap, he starts wringing ghostly wails from a mini Moog. House left, crop-haired keyboard player Arthur is extracting tortured shrieks from a cello in a brief introduction named as ‘Lego’ on the setlist. Big washes of purple and orange light form a rich visual backdrop. 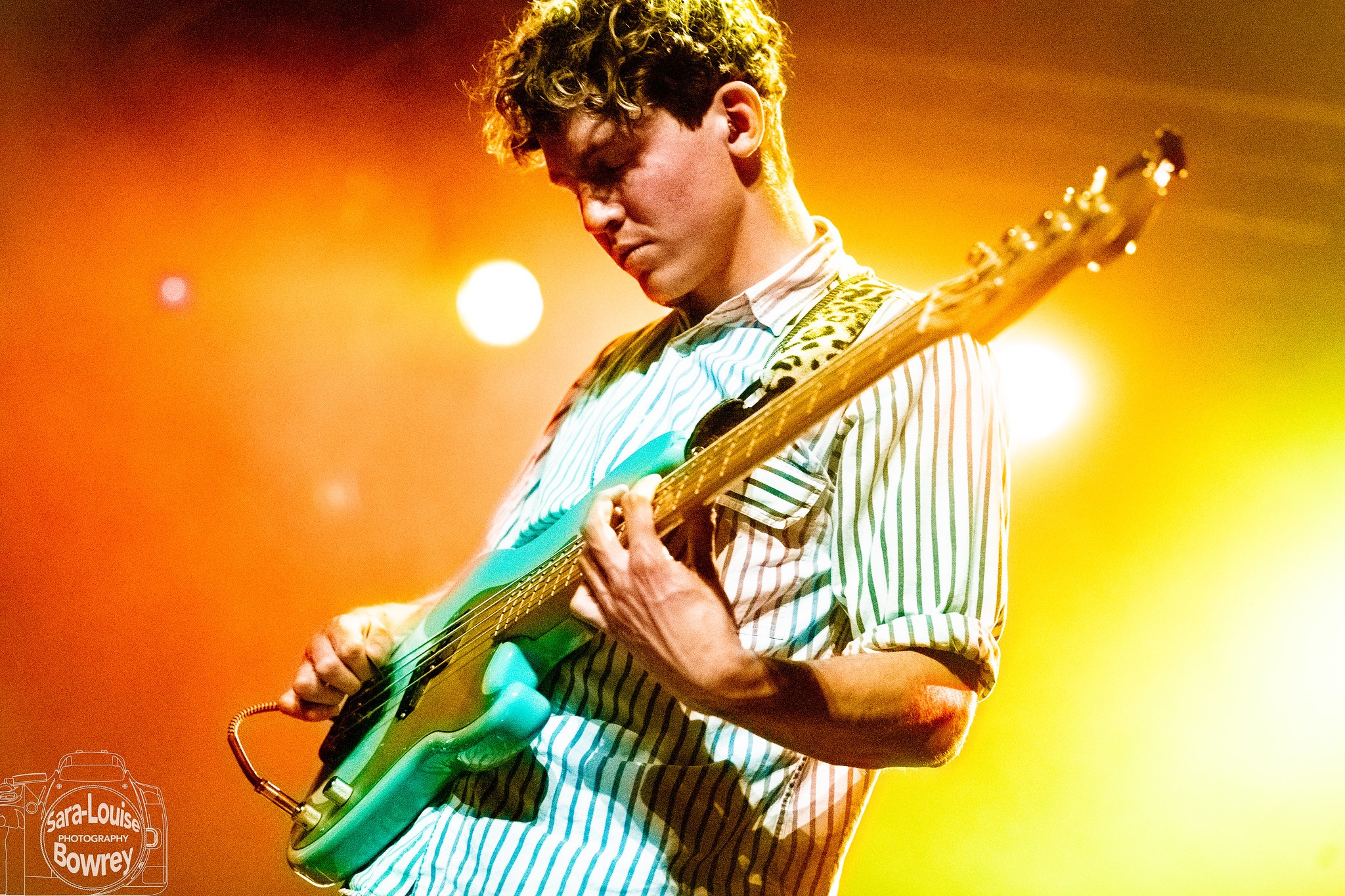 New instrumental ‘Cube Chaos’ launches with some heavy strummed bass and more cello, although Arthur springs up at one point to wallop a pair of gongs hanging next to him. The piece moves symphonically through different sections: haunting twanging guitar giving way to jarring rhythmic stabs and strange electronic noises that morph into a Krautrock groove as an urgent drumbeat comes rattling in. There’s a lot going on, and it’s a fulfilling and enjoyable listen.

We’re into more familiar territory with ‘Paddling’, one of the standout tracks from ‘Bright Green Field‘. Soaringly expansive, it motors along at a brisk pace. ‘Development’ is new, another instrumental at this stage. There’s lots of percussion and big swoops of effects. Guitarist Louis has a left-handed bass stashed behind him, and takes over to allow Laurie to deliver the trumpet hook.

Samples triggered from electronic pads on the kit lead us into ‘Peel St.’ Another track from the album, this builds to a manically intense climax. New number ‘Chlorine’ is particularly striking, lurching in and out of a tricky sounding 7/8 rhythm. In a calmer section, Ollie stands up and leaves the kit to deliver a semi-spoken vocal accompanied by some muted trumpet. Of the newer numbers, ‘Undergrowth’ sounds more developed, with a full vocal part over its strutting rhythm. “Well that joke’s not funny anymore,” snarls Ollie, over jazzy trumpet whoops and shuddering bursts of synth and guitar. There’s plenty more swapping of instruments for two more album numbers: ‘G.S.K.’ and ‘Global Groove’. House right are Laurie and Anton, the former a tall figure in a striped shirt, playing a green Precision bass. Guitarist Anton takes over to allow Laurie to chip in with some mournful sounding cornet. The gongs get another clattering, and Ollie flicks off his snare to emphasise the heavy beat.

There are a couple more new pieces to showcase. ‘Fugue’ kicks off with a gloriously ascending chord pattern embellished with a dancing lead line, before transitioning to a jazzier phase. As the inevitable consequence of so many instrument swaps, Louis has to spend a few moments unravelling the tangle of snaking cables before starting ‘FOTSB’. This sounds more like a work in progress, an instrumental with some interesting digressions around a basic four chord pattern.

‘Pamphlets’, another favourite from ‘Bright Green Field’, closes proceedings. The vocal refrain of “That’s why I don’t go outside” could be a fitting anthem for the pandemic, and the breathtakingly intense play out makes it a superb conclusion to the set. Whether you view the work of Squid as musical genius or an emperor’s new clothes of discordant noodling is going to be down to personal taste. Either way, it’s an undoubtedly intense live experience. The audience here seemed to love it, and I found the dense concentration of ideas packed into each piece satisfyingly agreeable. This is definitely a band on the way up, so catch them while you can.