Sussex Police issued an appeal for witnesses after a woman died in a crash in Old Shoreham Road, Southwick. 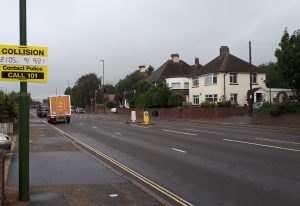 The force also asked for any security camera or dashcam footage that could help as the death of the 72-year-old pedestrian is investigated.

She died at a crossing at the top of Park Way – near the Mile Oak Road and Southwick Street traffic lights – after she was hit by a red BMW saloon car on Thursday (9 September).

Today (Wednesday 15 September), Sussex Police said “Police are appealing for witnesses to a collision in Southwick, in which a woman in her seventies sadly died.

“Officers were called to Old Shoreham Road at around 9pm on Thursday (9 September) to reports of a collision between a pedestrian and a vehicle.

“The pedestrian, aged 72, was sadly confirmed deceased at the scene.

“Inquiries are ongoing and officers would like to speak to anyone who saw what happened, or who may have captured any relevant dashcam or CCTV footage.

“Anyone with information is asked to report it online or call 101 quoting Operation Redford.”