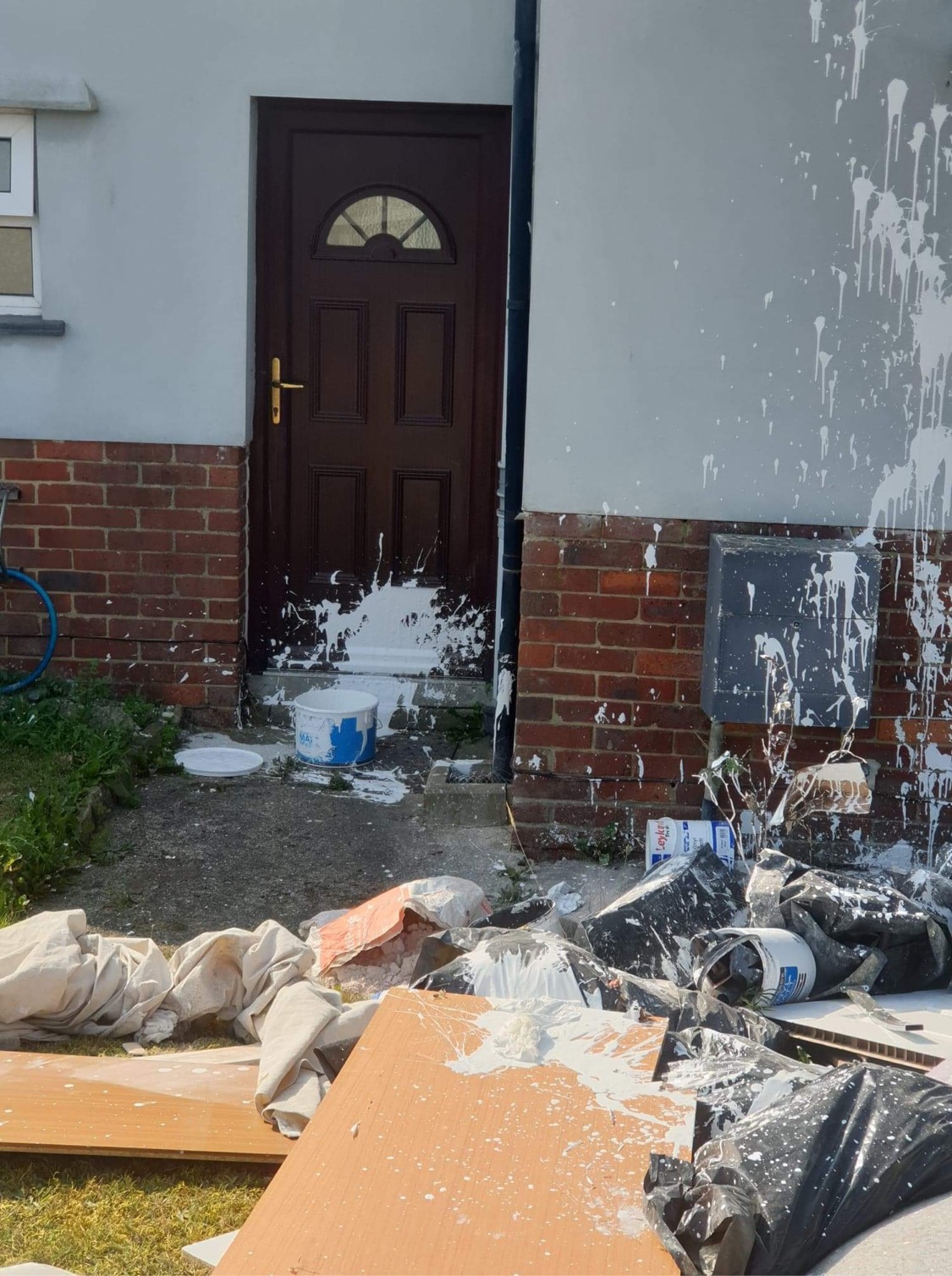 A Brighton builder attacked a house by throwing paint and dumping rubble in a dispute over an unpaid bill.

Armando Muca, 32, has been given a restraining order preventing him from contacting two of his clients and ordered to pay compensation for the clear-up bill.

But the builder, of Montague Street, insisted he would not be paying either of them compensation, saying they still owed him money.

Prosecuting at Brighton Magistrates Court last Wednesday, Jessica Harris said Muca had bombarded Lesley Diamond and Martina Glover with calls and texts in which he threatened to come round to their houses and rip out the work he had done.

Ms Diamond had hired him to work on a house she lets out to students and had paid £15,000 of the agreed £19,000 total when the dispute arose at the end of September last year.

He texted her a series of threatening messages, including: “Do not laugh at me, your house has not got wheels on it . . . not paying me money will be your biggest mistake. Don’t force me to do the impossible.”

On 21 September, he banged on the door of the house in Roundway, Coldean, and called her 21 times in the space of just ten minutes late at night.

Early the next morning, he called her another 13 times, before going round to the house, dumping building waste in the front garden and throwing paint on the wall, witnessed by the student tenants and neighbours.

He then sent more messages, telling Ms Diamond he had not been sleeping and had been arguing with his wife and child, which he blamed on her.

He said he would be returning to the property, adding: “I promise you getting arrested will not stop me, I promise you that.”

The same month, he was also sending threatening messages to Martina Glover over a similar dispute, including threats to come inside and rip out completed work, and calling her and her husband “scums”.

He also went to her home in Birdham Road and became angry and aggressive towards her. He said there was no point calling the police, saying: “What are they going to do, put me in prison for 24 hours?”

He denied two counts of harassment and one of criminal damage – but was found guilty at a trial in August.

In a victim impact statement read out in court at last week’s sentencing, Ms Diamond said she had been left fearful for both herself and her tenants. She said: “I worry that Armanda Muca will come to my home address as he knows I’m female, alone and in my 60s.”

Ms Glover said: “I’m currently living in fear I will come across Mr Muca. I feel emotionally damaged because of him calling us scum.”

Muca, who represented himself, began to tell the bench at length what the issues with the disputed contract were, but was told by the court clerk to stick to the offences he had been convicted of, following a trial in August.

He said: “This is not fair because it’s my child that has to go hungry. This is costing me money.

“The system is bullying young people who try to work hard. I’m not saying I’m perfect. I was angry because I had worked non stop. Clearly they were unhappy with my work, they should have asked me to stop.”

But the bench said the offences were serious enough to warrant a 12 month community order, to include 10 rehabilitation days and 200 hours of unpaid work.

Chair of the bench Shirley Vening ordered to pay Ms Diamond £1,275 to cover the costs of removing the paint and rubble, and changing the locks after Muca failed to return the house keys.

She also said he had to pay a further £200 compensation to both women for the distress he had caused, plus court costs of £660.

Muca said: “They can take their compensation out of the money they owe me. I’m having to take so much time off work to do community work, but they owe me loads of money.

“This is so unfair. I can’t afford to pay it. It’s absolutely ridiculous.”

Mr Muca was told he had 28 days to pay the compensation, and that he had the right to appeal.