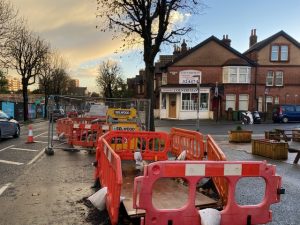 Streets off Sackville Road, Hove, were affected when emergency repairs started after their sewers became blocked with concrete from a neighbouring building site.

Bin lorries were unable to get down Landseer Road and Prinsep Road, one-way streets in the area of Hove known as Artists’ Corner.

One resident, who asked not to be identified, said that neighbours had spotted rats regularly since Monday 20 December after four weeks of missed collections.

Brighton and Hove City Council’s Cityclean workers last collected recycling on Thursday 16 December but the resident said that rubbish had not been collected since Friday 26 November.

After inquires by the Local Democracy Reporting Service, Cityclean workers went out during the afternoon of Friday 7 January to clean up the backlog.

Concrete blocking the sewers came from building work on the neighbouring Moda Living site in Sackville Road where hundreds of homes are going up.

Midguard, a contractor working on the project, said that it helped residents by sending a skip for rubbish on Thursday 16 December.

Midgard said: “Refuse collection has been an issue in Brighton and Hove for some time and residents near our Sackville Road site were impacted by this in the lead up to Christmas.

“We were happy to step in and collect refuse to support our local community.”

But after collections were missed, Councillor Bagaeen criticised the lack of a plan and Councillor Brown said that bin lorries could still reach the two streets because the one-way system was suspended. 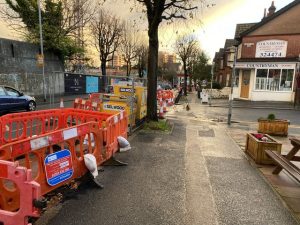 When the Local Democracy Reporting Service reported on the issue early last month, the council said that the rubbish would be collected “as soon as possible”.

Since then, the council has apologised again to residents in Landseer Road and Prinsep Road about the lack of collections since November.

The council said: “This situation has been caused by the emergency construction site roadworks on Sackville Road – when concrete ended up in the sewer causing Southern Water to undertake remedial works. But we acknowledge that we should have dealt with it better.

“There have been issues around our trucks gaining access. We will henceforth be collecting from Landseer Road and Princep Road with a smaller truck to make things easier.

“We are committed to re-establishing regular refuse and recycling collections there in line with the rest of the city.”