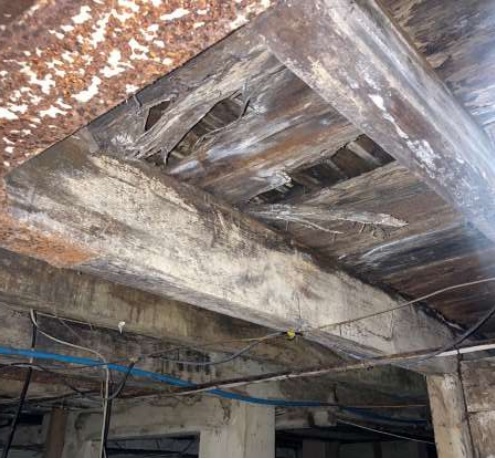 Surveyor Paul Halliwell of Archer Specilist Treatments Ltd has recommended “attacking” the outbreak room by room, starting with the basement under the stage.

His report is included in a planning application to clear and treat infested areas of the Grade II* listed theatre.

The Middle Street venue is undergoing a major restoration after being bought by Matsim Properties in September 2020.

Last year, Matsim took out parts of the corroded old roof and put a temporary domed fibreglass roof over it to stop water leaking in.

“The only sensible way of dealing with multiple outbreaks such as this is to ‘attack’ one area at a time.

“The most serious outbreak is clearly in the basement below the stage and fly tower.

“We would suggest that this area should be dealt with initially particularly as it is active a spreading.

“All of the affected timbers need to be removed and the remaining structure treated accordingly.”

A heritage report also included in the latest application says: “The worst area is under the fly tower that has been exposed to a significant period of damp and humid conditions caused by water ingress and a lack of ventilation.

The stage floor structure and basement side rooms have been lost to dry rot at basement level below the fly tower.

“The Mecca installed supplementary floor built in timber has also been lost to infestation at ground floor level as well as the timber pitched roof structure over the area most recently used as Mecca’s canteen/kitchen.”

It adds: “This work is purely intended to try to save the building from further deterioration due to the extent of the dry rot attack.

“These works do not cover reinstatement as this work will all form part of the full application dealing with the building as a whole.”

The Hippodrome, most recently a Mecca bingo hall, has been disused since 2007.