One of Brighton’s newest seafront venues wants to stay open until 2am for Pride but police and council officials have lodged objections.

The Shelter Hall, in King’s Road Arches, told Brighton and Hove City Council that it planned two ticketed events – from 10pm to 2am on Friday 5 August and Saturday 6 August.

The venue’s general manager Skye Merriman said that the plan was to serve food from all seven kitchens until 11pm and drinks until 1.30am.

There would be a DJ playing music next to a proposed dancefloor until 2am – and bosses want customers to be allowed to stand while drinking which is banned under the current licence.

Five security guards and five Shelter Hall managers would be on duty for the pre-paid ticket-only event.

As a result of the objections, a council licensing panel – made up of three councillors – is due to decide next week whether the venue can take advantage of rules governing one-off events.

Inspector Michelle Palmer-Harris, from Sussex Police, said that the venue wanted to host 400 people and create a “night club/dance floor”.

In a letter of objection, Inspector Palmer-Harris said: “This will attract a greater number of people to an area which is already of concern in the night-time economy.”

She said that Pride was the single biggest event in Brighton and Hove and was taking place for the first time since 2019 because of the coronavirus pandemic restrictions.

She said: “Stats from 2018 showed that in excess of 400,000 people attended the event over the weekend. “The number is expected to be repeated or greater this year.”

She added: “The premises has never been open for business during a Pride event and so has no experience or knowledge of operating during the city-wide festival or how that may look for Shelter Hall as an individual premises.”

Her police colleagues would need to work with all licenced premises locally, she said, to mitigate risks to people over the weekend.

Environmental health officers objected to the proposed dance floor and a DJ playing music until 2am because of the potential disturbance for nearby residents. 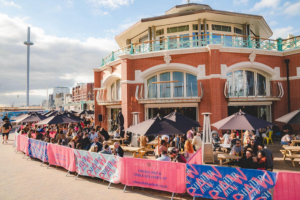 The current licence held by the venue’s leaseholder, Sessions Markets Limited, allows for drink to be sold from 8am to 11.30pm.

It also requires the venue to make substantial food available from no fewer than three of the seven kitchens up to 10.30pm on summer weekends – and at least one kitchen must stay open until at least 11pm.

The council licensing panel is due to hold a hearing starting at 10am next Wednesday (29 June). The hearing is scheduled to be webcast on the council’s website.