With video: Two men arrested during protest over drag queen reading to children

Two men were arrested as protesters for and against a Drag Queen Story Hour held demonstrations outside libraries in Brighton and Hove today (Thursday 4 August). 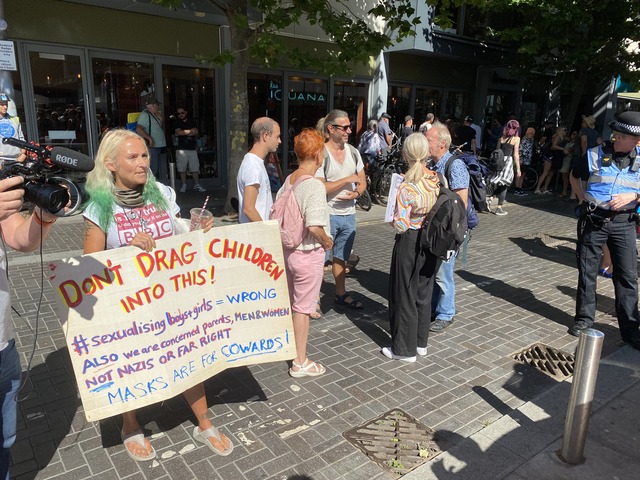 The arrests – of a 29-year-old and a 64-year-old – were outside Hove Library, in Church Road, Hove, and followed an earlier stand-off outside the Jubilee Library, Jubilee Street, in Brighton.

And later there were smaller demonstrations outside the library in Woodingdean.

The protests centred on 27-year-old Sab Samuel, known as Aida H Dee, a drag performer and author, who has faced protests elsewhere over the children’s story time events.

Mr Samuel is a patron of Autistic Inclusive Meets London and has been described as an “acclaimed performer” at the Edinburgh Fringe.

One of the protesters, who have his name as Jacob, said that he had lived in Brighton for 20 years and stood with the campaigners against the story telling event.

He said that he was a father – and the son of a former primary school teacher – and that he objected to his council tax money being spent on the event.

He said: “My mum was a primary school teacher for 40 years. If we look at this subjectively, what we’ve got is a man dressed, you could describe, like a trashy whore reading stories to children in a public space.

“I know if my mum went to school dressed like that, she would get the sack. There’s a reason why most people would think that’s right. It’s not appropriate clothing because that kind of clothing is intrinsically sexual.

“It’s not like a transvestite going into the library dressed how my wife is dressed. There’s a whole load of baggage involved.

“My concern is there’s an acceptance of sexualisation of children, which is unnecessary. I’m all for inclusivity and acceptance. I have gay and transexual friends. I don’t care what people get up to in their own private life.

“I don’t think taxpayers’ money should be spent this way, giving £400 to a guy dressed as a trashy whore to read stories to children.”

Others have said that nobody complains about children seeing a traditional panto where, by convention, some female characters are played by men and the main male role is played by a woman.

“Our library service aims to offer a varied programme of activity and give careful consideration to every event they host.

“It’s a performance by professional children’s entertainers. We’re confident the content is appropriate and well suited for the advertised age groups.

“Parents who have attended performances at other libraries across the country and in Brighton and Hove libraries have shared very positive feedback about the event, its suitability for younger audiences and their children’s enjoyment of it.

“The nature of the event is clearly advertised. We believe it will attract those who feel comfortable and positive about its content.”