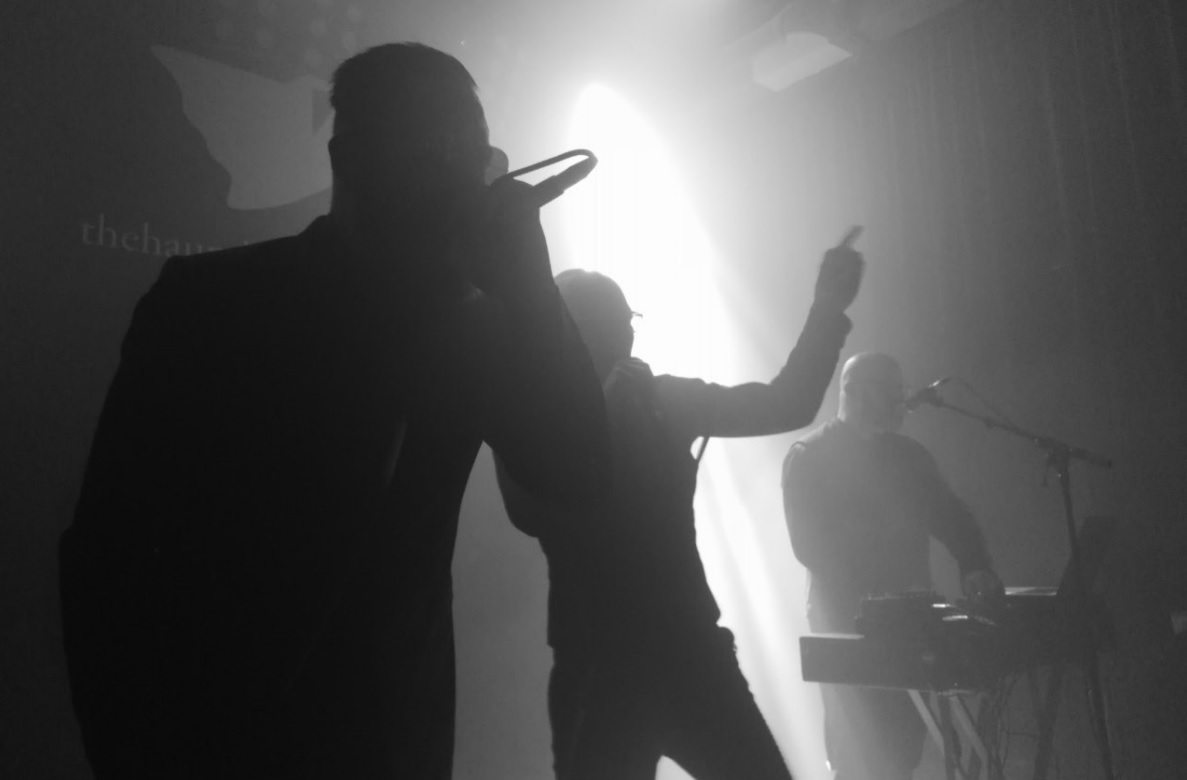 After making sweet music for 32 years, Sweden’s finest future-synth band Covenant, finally came and played a gig in Brighton and the Brighton and Hove News were present to cover it.

I must start the review by firstly saying a massive thanks must surely go out to Frank Drake from Flag Promotions for organising such an excellent line-up of synth bands appearing tonight in Brighton, namely Covenant, Massive Ego and Empathy Test.

Strangely enough, I have actually witnessed performances by all three acts once before but across different years. So I knew exactly what I was letting myself in for.

Eskil Simonsson and Daniel Myer of Covenant live at The Haunt in Brighton 16.3.18

The Covenant live line-up tonight was made up of Eskil Simonsson, Daniel Jonasson and Daniel Myer. It’s been so many years since I last saw the band at the Electric Ballroom in London, when singer Eskil had long flowing Scandinavian hair, but nowadays he has opted for the bald look. This probably is more suited to the electronic body music look of tonight’s punters, with black garb far outweighing any other colour put together. Yes, the band did wear black.

This evening was going to be special for me as when I saw Covenant live before, I was with my mate Eddie, who has since sadly passed away. Covenant haven’t toured these shores in five years but now they’re finally back with their ‘Blinding Dark Tour’, in support of their ninth studio album of the same name. I actually have their first eight albums on CD, so I guess I am an avid fan, but I really must buy the new album instead of the download – it’s not the same you know. 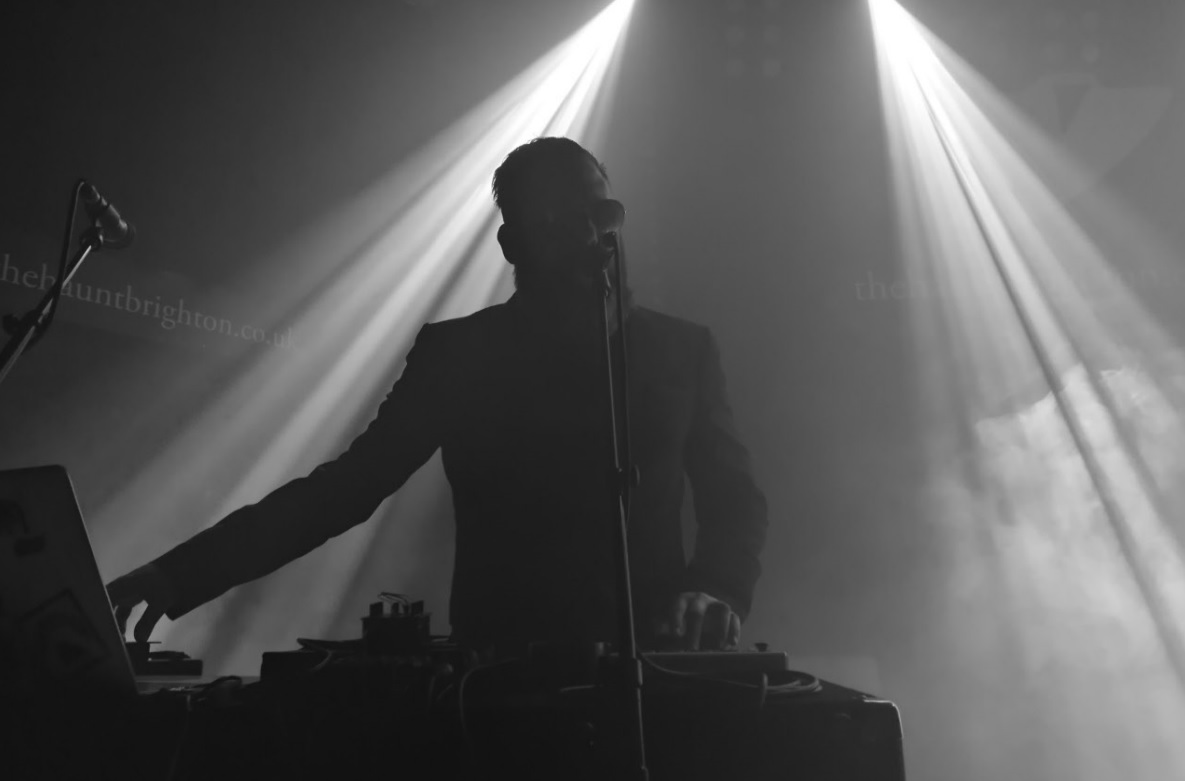 Daniel Jonasson of Covenant live at The Haunt in Brighton 16.3.18

The Haunt witnessed sets first from Empathy Test and then Massive Ego, both of which we will cover shortly, meanwhile let’s start with headliners Covenant.

There was no intro music just a sort of synth drone for about five minutes before the trio entered stage left. In the meantime the smoke machines went into overdrive, pouring out more dry ice than you’d ever see in a Hammer Horror film. Great for atmosphere, but a mare for taking pictures, even close up!

The sound on the night was crisp and the guys flitted from track to track with career spanning set. One minute we were seriously jumping around and another we were sedately watching in anticipation. I personally can’t get enough of their harder faster material. I crave the music vibrations pummeling my body and letting me know I’m alive and I am having one of the best experiences that you can possibly have. 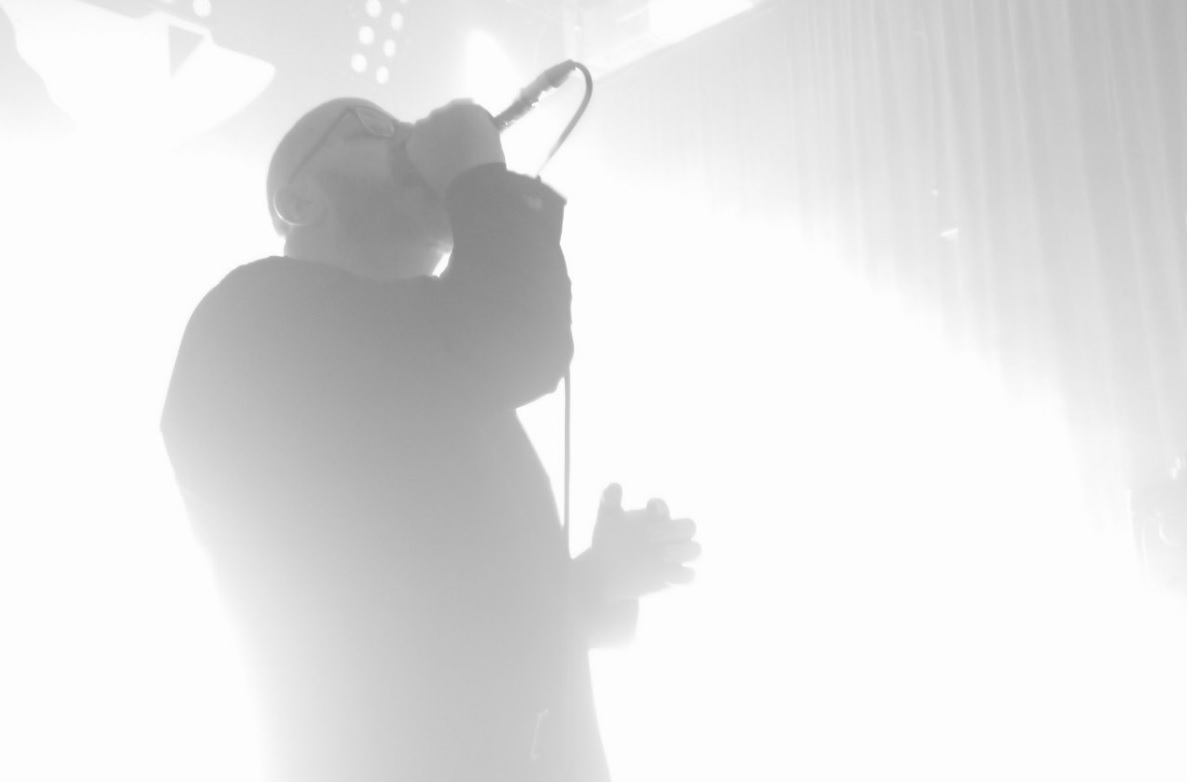 Daniel Myer of Covenant live at The Haunt in Brighton 16.3.18

I was so enthralled with their set, that I forgot to make notes and as a result couldn’t currently tell you what their exact setlist was – I know, shameful! But they were absolutely brilliant! I do remember hearing their last single ‘Sound Mirrors’ as well as ‘Modern Ruin’, ‘Stalker’ and ‘Lightbringer’. They finished with ‘Call The Ships To Port’ and ‘Dead Stars’, but by far the best tune of the night was ‘Ritual Noise’ which literally gave me goosebumps all over – “We make ritual noise, We weave the fabric of dreams, We build cities of sound, We feel the rhythm of time”

If you wish to capture the feeling of the band live, then I strongly recommend that you look out for their ‘In Transit’ DVD, or at worst their CD version. In my opinion it is easily in my Top 10 Live Albums ever!

The Covenant setlist included: ‘Sound Mirrors’, ‘Modern Ruin’, ‘Stalker’, ‘Lightbringer’, ‘Ritual Noise’, ‘Call The Ships To Port’ and ‘Dead Stars’ (Can anyone help me out on the missing tracks?)
For further Covenant details, visit: http://www.covenant.se/ 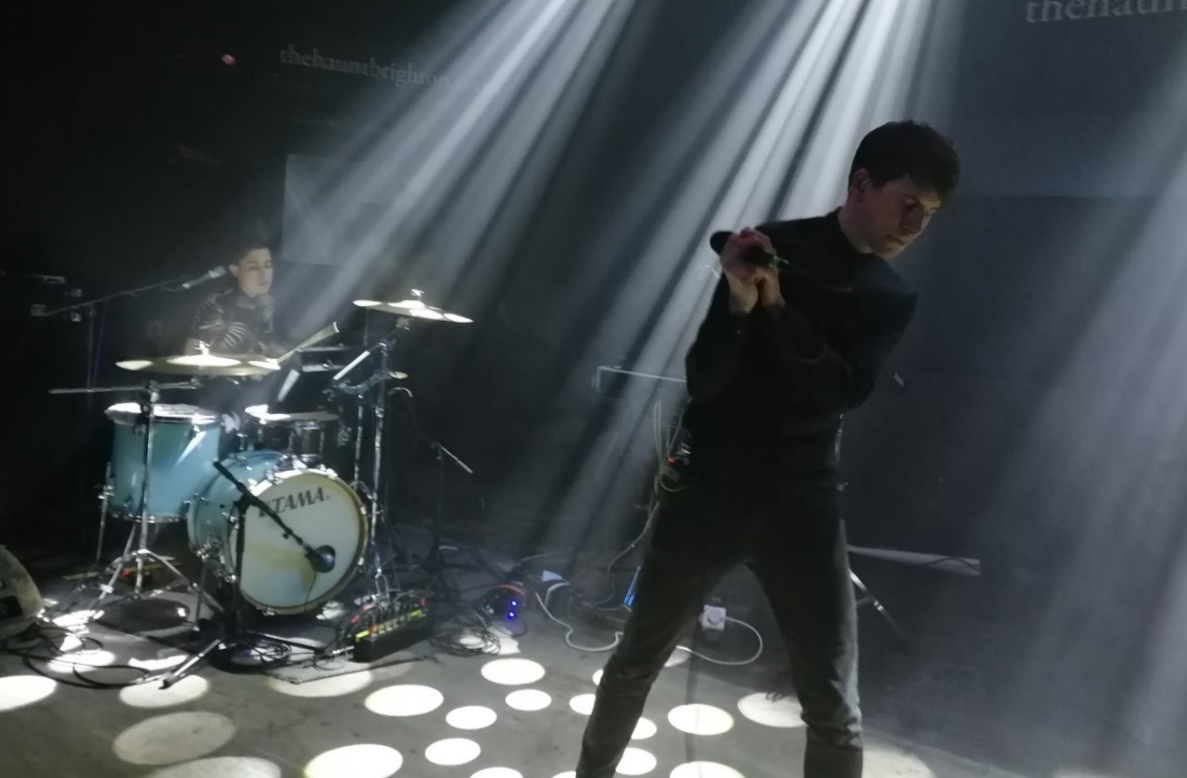 Empathy Test at their gig at The Haunt in Brighton on 16.3.18

First up this evening, at the early time of 6:45pm was Empathy Test who hail from London. The ‘live’ trio are made up of Isaac Howlett (vocals), Sam Winter-Quick (keyboards) and Christina Lopez (drums). There is apparently another band member who goes by the name of Adam Relf and he is responsible for the production, so I guess that he might have been behind the scenes. 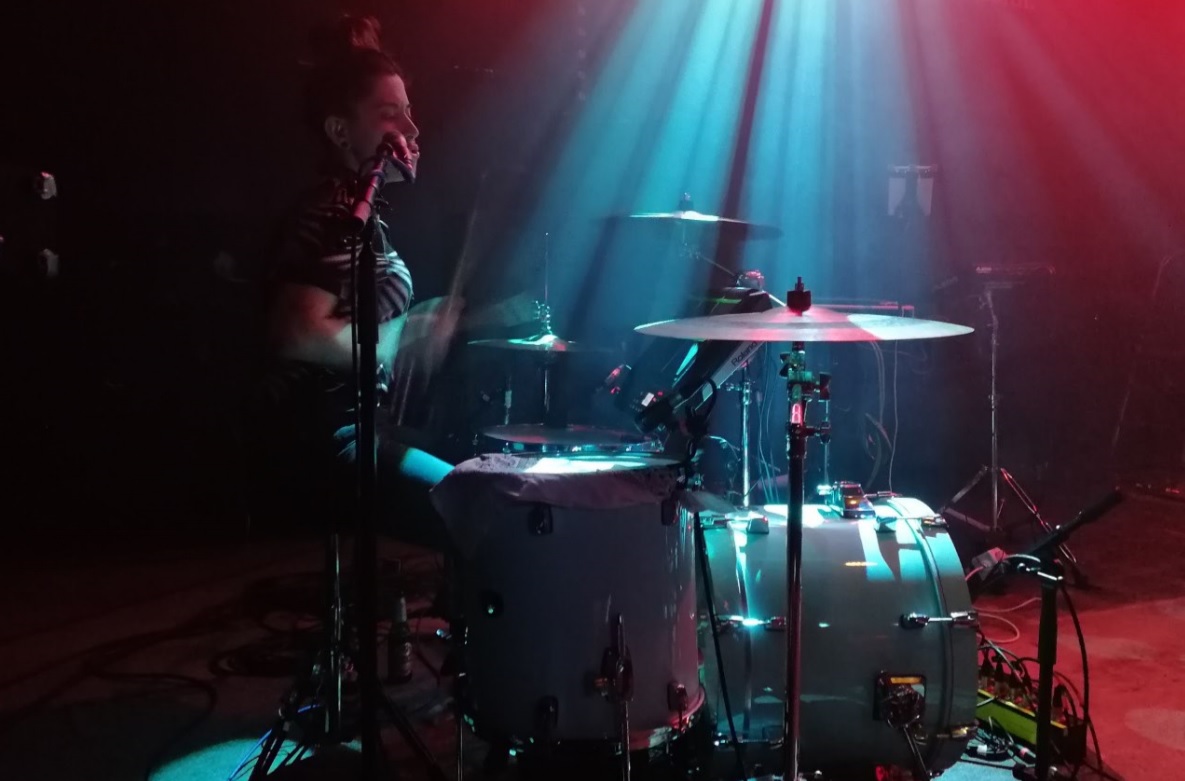 Christina Lopez of Empathy Test at their gig at The Haunt in Brighton on 16.3.18

They say that they are inspired by ’90s guitar bands, underground dance music and ’80s sci-fi soundtracks. You can hear that there’s a definite analog synth situation going on here and this evening the band were very well received by those that had made it to the venue in time. I thought that Christina’s drumming was rather spot on tonight and that the band held it together rather well. 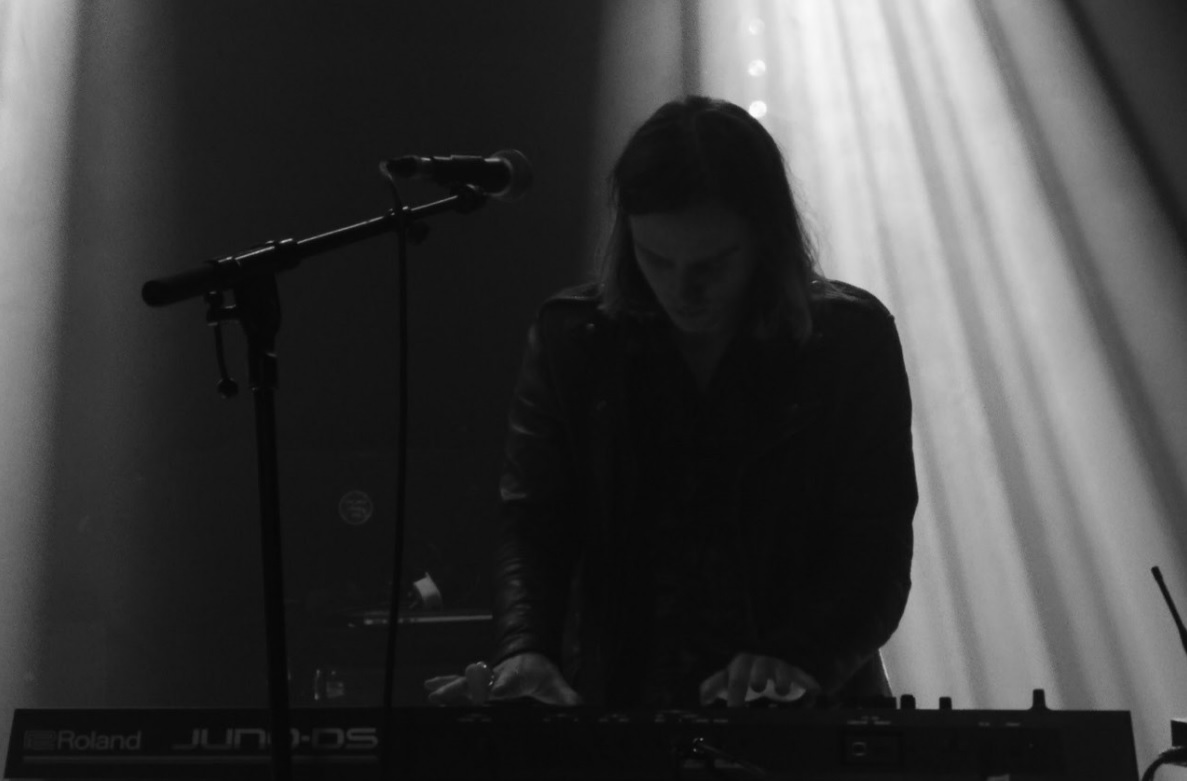 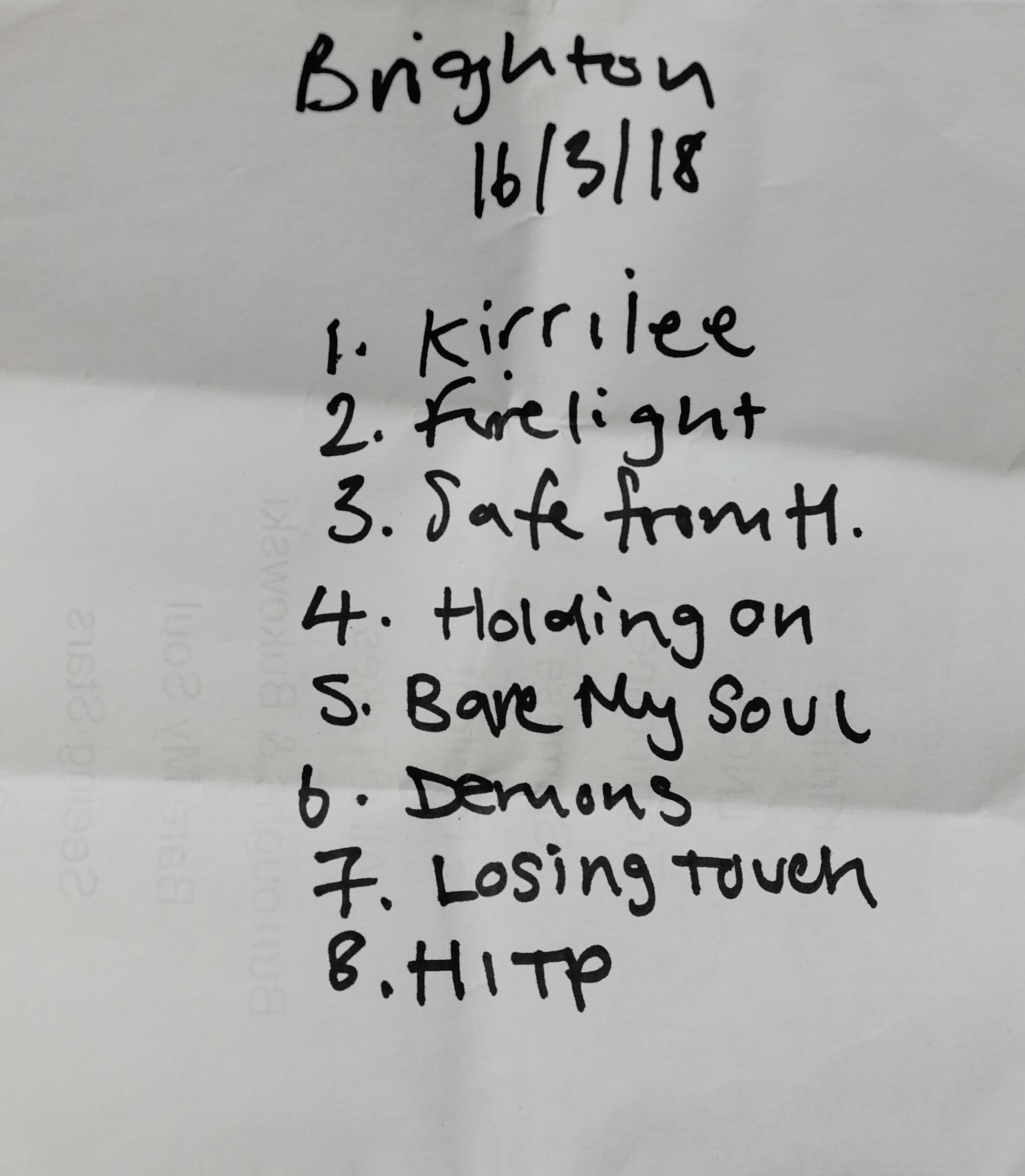 Empathy Test’s setlist for their gig at The Haunt in Brighton on 16.3.18

You can hear/purchase their albums from their official website: https://www.empathytest.com/ 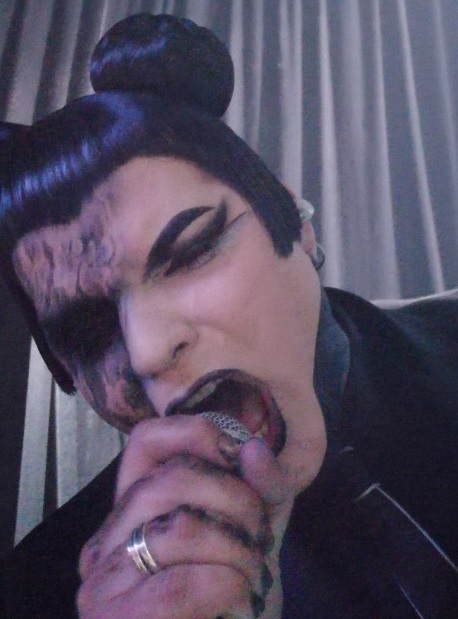 Second on the bill was Portslade’s (yes Portslade!) finest pop-peacocks Massive Ego. They were formed in 1996 by Marc Massive and Andy JT, but these days they are a trio made up of Marc Massive, Scot Collins and Oliver Frost. 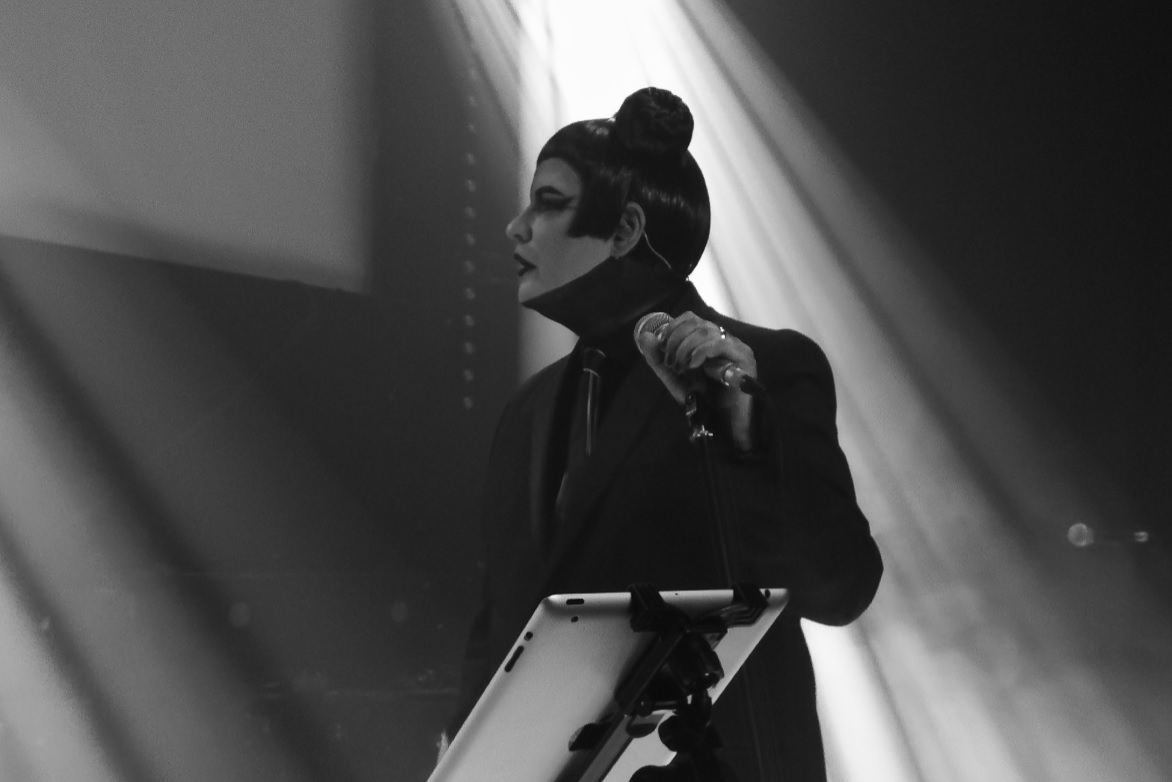 Marc (who has fronted the band from the beginning) has covered all manner of things in his career including being an ex-model and dancer for Boy George’s Jesus Loves You band, a disc jockey and even an art event curator. At one stage, Massive Ego found themselves at the centre new romantic revival scene in London called ‘Romo‘. One thing is certain about that is that Marc would have loved that as he is a self confessed Durannie (Duran Duran fan). 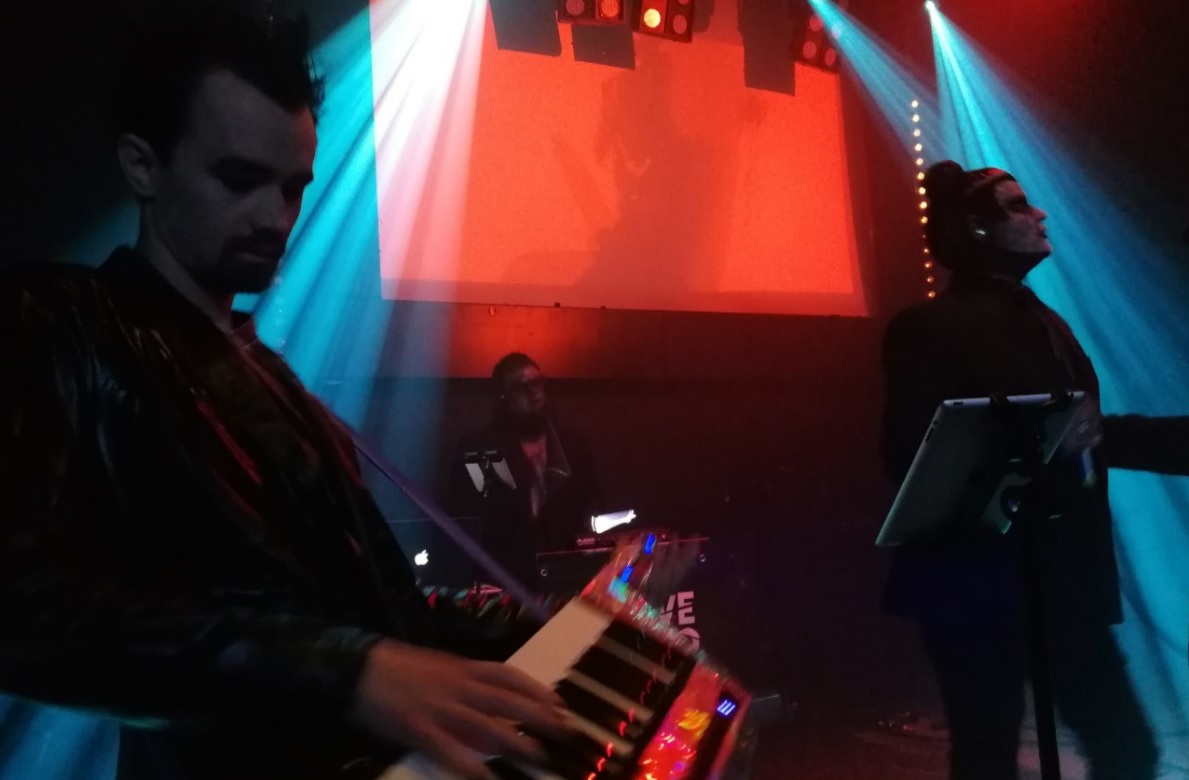 Massive Ego at their gig at The Haunt in Brighton on 16.3.18

During their time together, the various band members of Massive Ego have played the length and breadth of the UK at clubs and festivals and right across Europe, although they are most popular in Germany. Massive Ego tracks have featured on well over 40 compilation albums.

In 2013, Marc became more interested in the darker ebm/industrial/goth scene and from this point all new material reflected this change and thus this is what we lucky punters were treated to tonight. We had about seven and a half tracks courtesy of technical difficulties on the second track ‘Beautiful Suicide’. But hey, the audience didn’t seem to mind at all, I think that quite a few of them would just like to ask Marc a few questions about how he got his look and how long it takes the band to apply their make-up. During this brief pause, Marc actually found out that a lady to my right in the crowd had come all the way over from Japan to see the gig ! Now that’s seriously impressive! 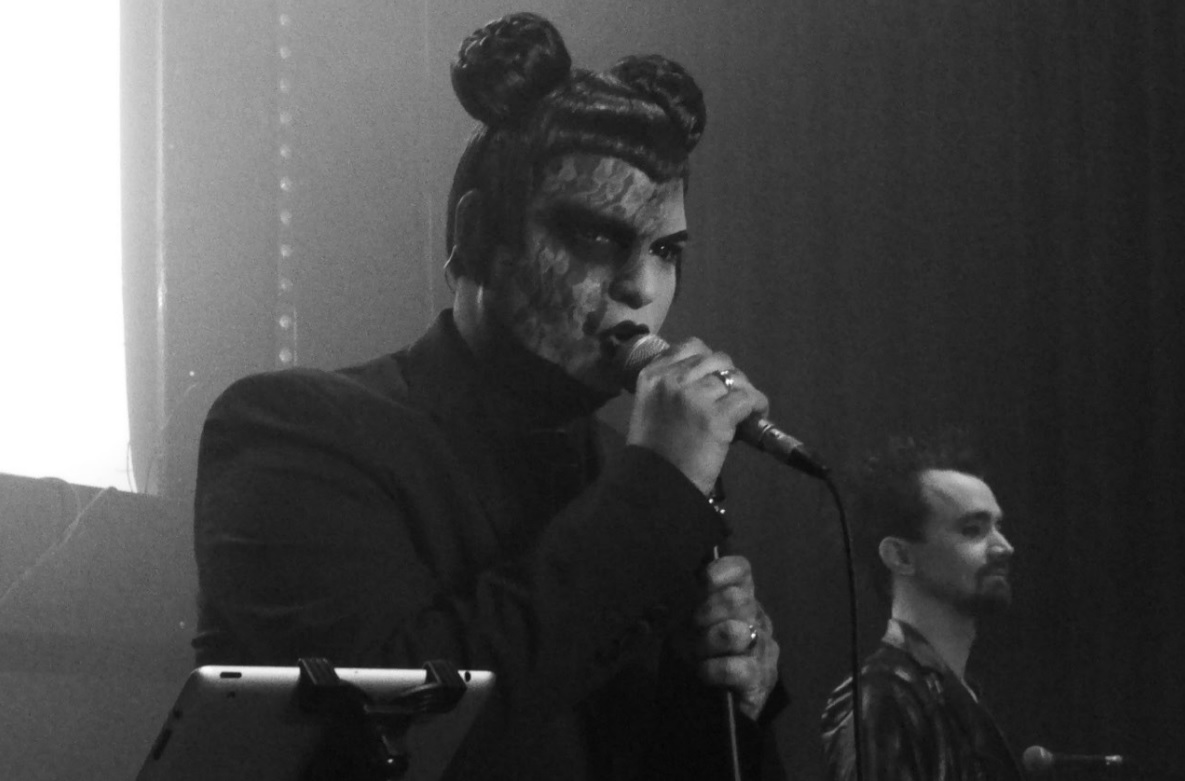 Massive Ego setlist: ‘Ghost In My Dream’, ‘Beautiful Suicide’ (edited), ‘She Uses Sex’, ‘Low Life’, ‘Kates In A State’, ‘I Idolize You’, ‘For The Blood In Your Veins’, ‘Haters Gonna Hate’ 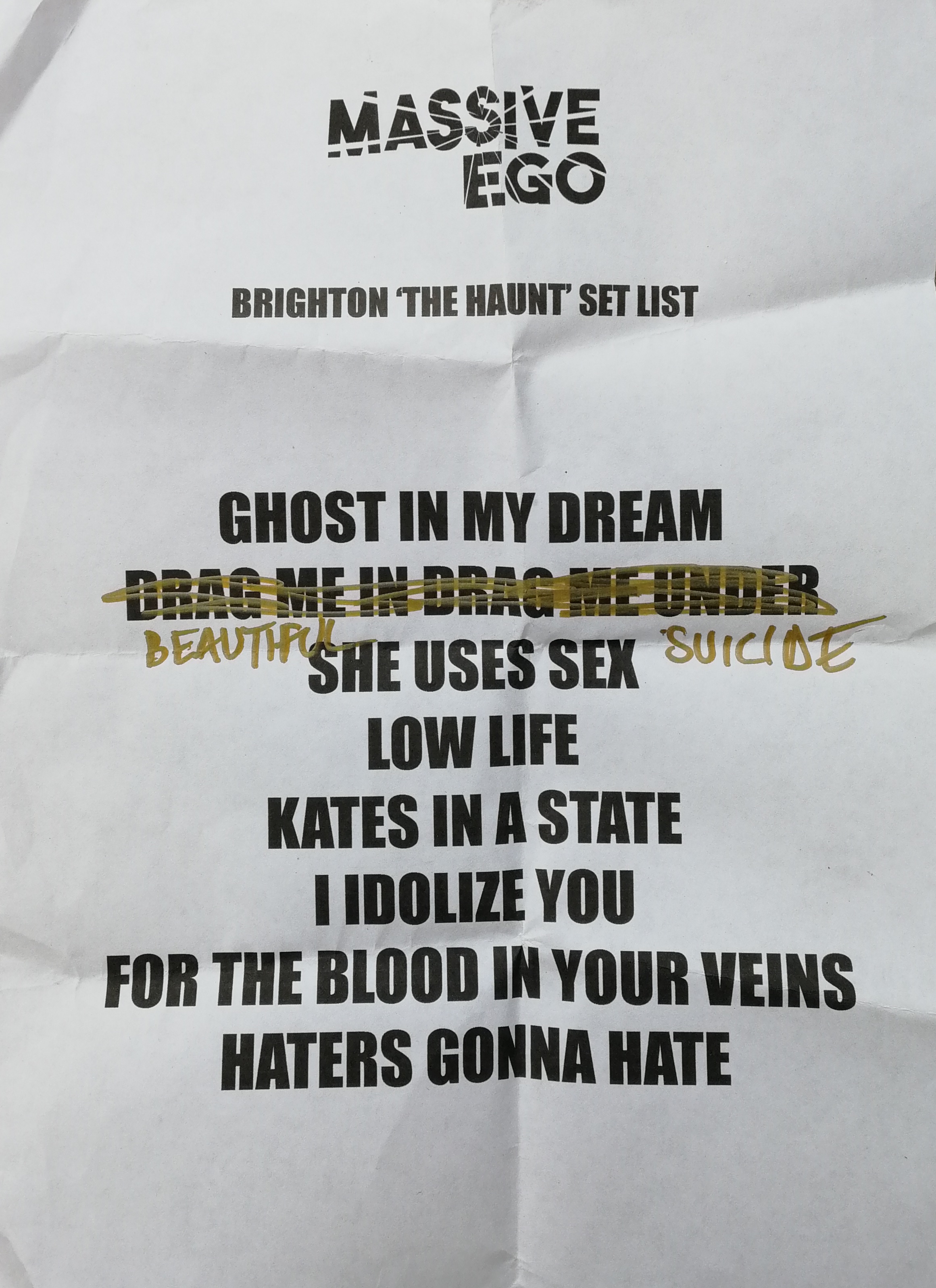 Massive Ego’s setlist for their gig at The Haunt in Brighton on 16.3.18

To find out more, visit: http://www.massiveego.co.uk/ 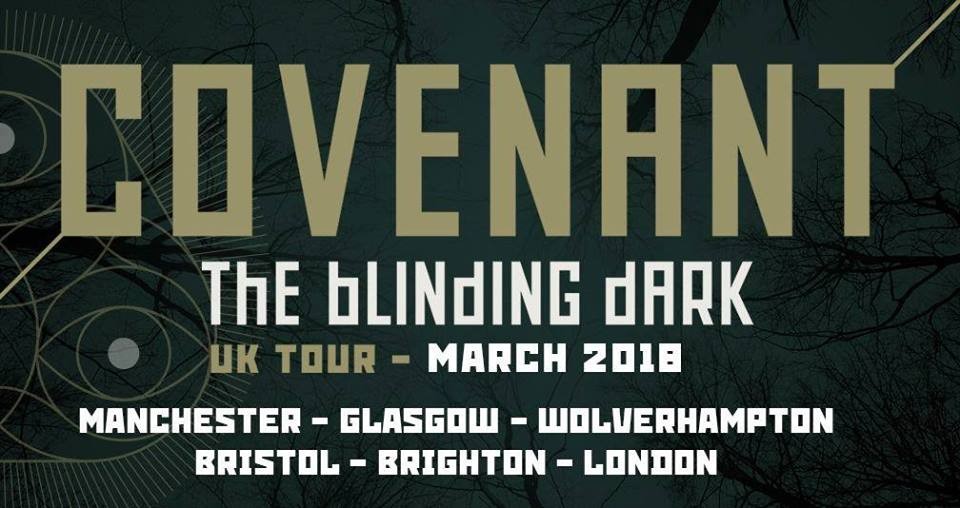 If you enjoy synth music like the Covenant, then the chances are that you will also enjoy the bands listed below. Simply click on each of the names and they will take you to our concert reviews on those bands: