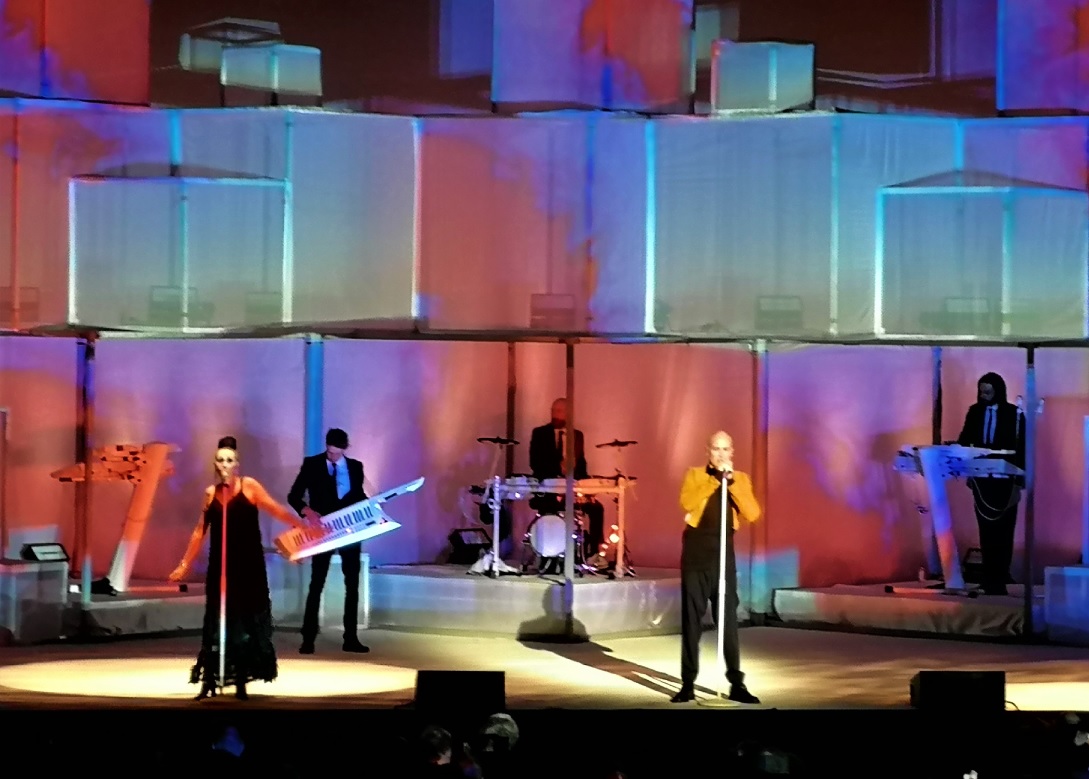 The Human League were finally back in Brighton this evening. We posted the notification of the gig just over a year ago, (17th November 2017 to be precise) and so the anticipation has been building ever since then.

I have been a fan ever since discovering the Sheffield outfit late one night when I used to live with my parents many moons ago. I can remember coming home on Tuesday 6th November 1979 and turning on the TV and there on the BBC was a 30 minute show entitled ‘Mainstream’. 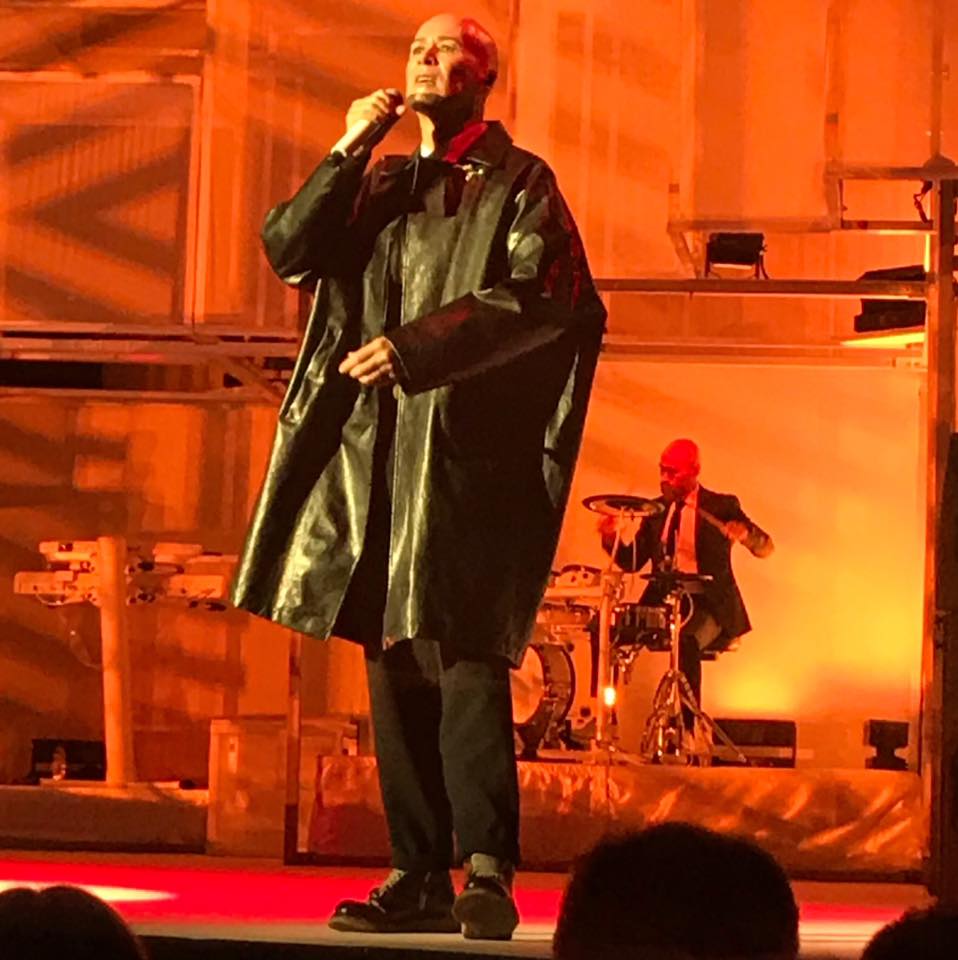 According to imdb, there were only 11 of these weekly magazine programmes ever made and on that fateful night as I turned on the TV, I was greeted by the beginning by the opening notes of a terrific performance from the original Human League lineup (Philip Oakey, Ian Craig Marsh, Martyn Ware and Philip Adrian Wright), who were performing ‘The Path Of Least Resistance’ from their debut album entitled ‘Reproduction’. Talk about being gobsmacked, this performance was way ahead of its time. The performance was re-broadcast several years later and you can enjoy it HERE.

This performance was virtually two years before The Human League (MkII) unleashed their world famous ‘Dare’ album to the world, which included the UK’s 23rd biggest selling single ever – ‘Don’t You Want Me’, which was released on 27th November 1981 and became the Christmas number one. It has shifted over 1,560,000 copies and more than likely virtually all of the sold out 4,500 crowd in attendance at the Brighton Centre tonight has a copy of it in their collection. 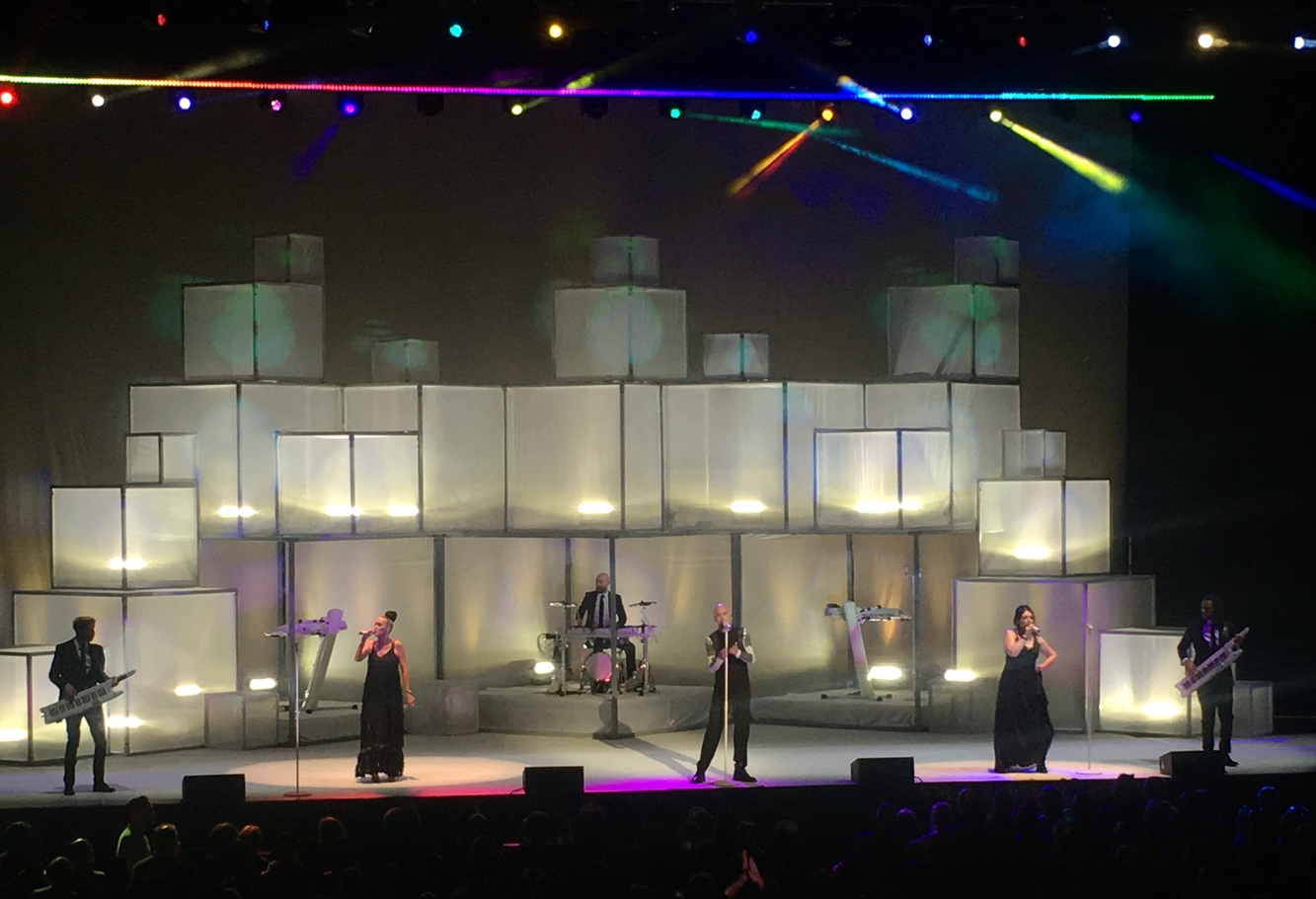 The ever popular band are in the city on their ‘Red Live 2018 Tour’, which has already called into Belgium, Netherlands, Germany, Denmark, Sweden, Norway, prior to tonight’s Brighton performance. The Human League (Philip Oakey, Joanne Catherall and Susan Ann Sulley) are still big business despite only having ever released nine albums across their 41 year history, excluding the compilations, with the last being seven years ago. 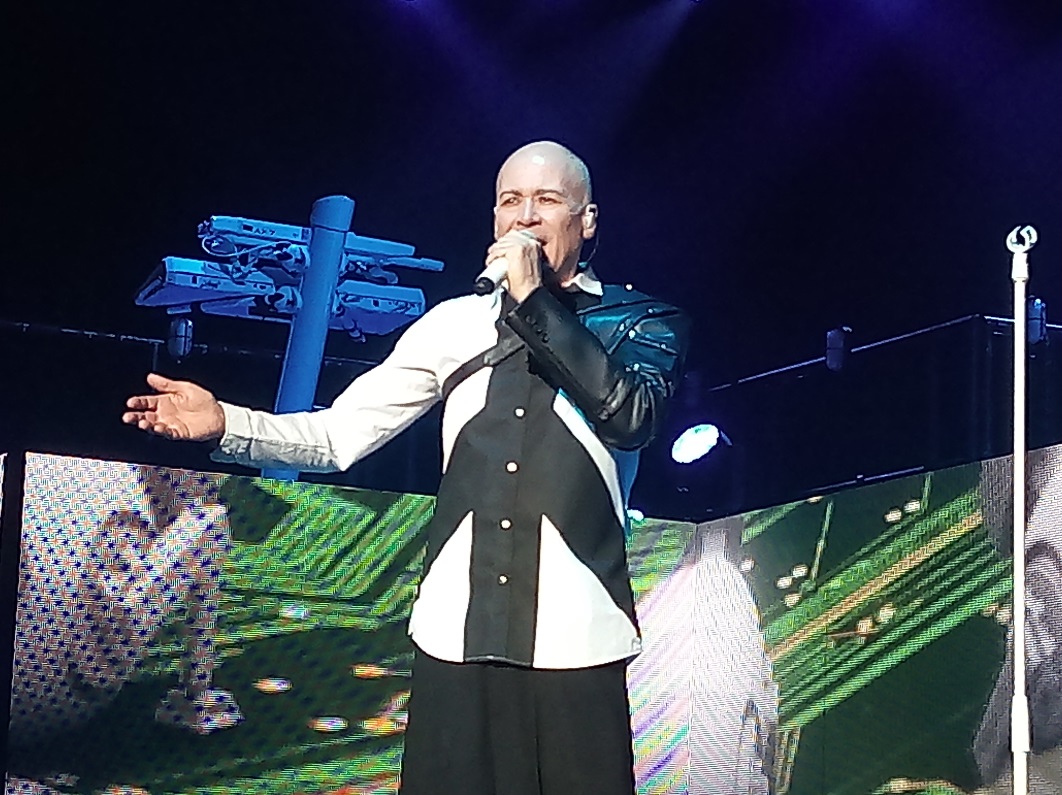 The band have become a ‘Great British (Synthpop) Institution’ and something to be treasured. When they last performed at the Brighton Centre on 9th December 2016, they performed a glitzy twenty classics set, with my highlights being ‘Filling Up With Heaven’, ‘Seconds’, ‘The Sound Of The Crowd’, ‘Being Boiled’ and ‘Love Action (I Believe In Love)’.

The Human League are obviously fond of Brighton, as in 2005 they released an album and DVD of their Brighton Dome concert recorded on 19th December 2003. I was in attendance that night and remember it very well indeed. It was for two main reasons, firstly Phil Oakey fell over on stage and he said that they could edit that bit out, and secondly, the support act was ex-Ultravox! frontman John Foxx, who in my opinion that night totally blew the Sheffield band out of the water with his latest cuts from his then new album ‘Crash And Burn’.

So here we all are back again and tonight vocalists Philip Oakey, Joanne Catherall and Susan Ann Sulley are joined by Nick Banks (keyboards/guitar), Ben Smith (keyboards), Rob Barton (drums and percussion) and hiding in the wings David Beevers (programming). 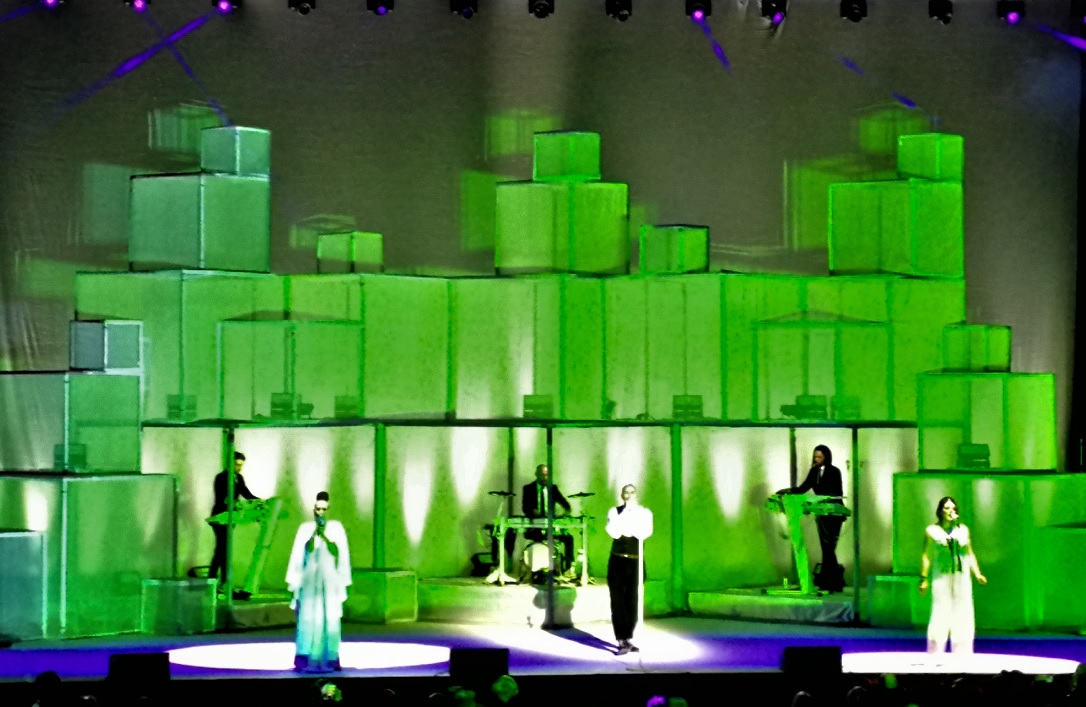 The Human League live at the Brighton Centre in 23.11.18 (pic Nick Linazasoro)

This evening we were going to be treated to 19 tracks from the band (one less than 2016’s gig), which spanned the bands long musical career. There were this time round many of the usual suspects to keep the mums and dads happy in order that they could sing along to ‘Don’t You Want Me’, ‘Mirror Man’, ‘(Keep Feeling) Fascination’ and ‘Tell Me When’.

I had actually forgotten how much Phil moves from far left to far right of the stage and back again – no wonder the lads still thin! He was as ever flanked by his girls Joanne and Susan Ann as they waded through hit after hit. The crowd were well behind them, singing along to their heart’s content. There were the inevitable costume changes by all three band members, in order to keep things fresh. 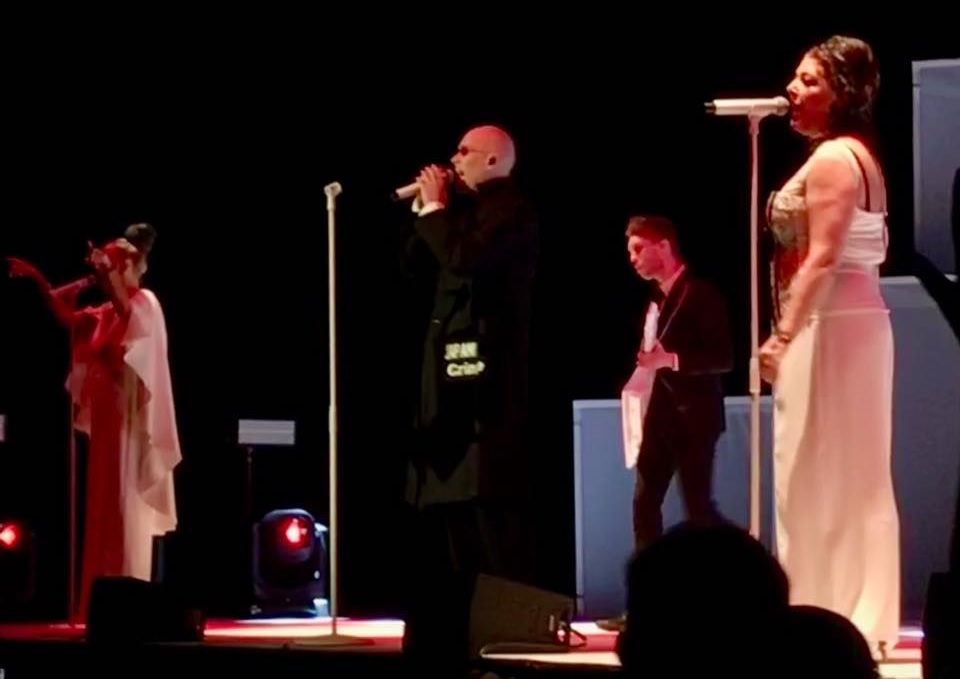 Although the stage set tonight was rather impressive, I have to say that the one two years ago with all the lights and dual layers was for myself much more impressive. In fact the one two years ago was their most impressive stage set that I have ever witnessed from the band and that includes when I saw them back in the early 1980’s, when they played Brighton Dome and ended their set with a cover of The Rezillos ‘Destination Venus’. That was a surprise back then, but then Human League band member Jo Callis wrote the tune and was previously in The Rezillos. 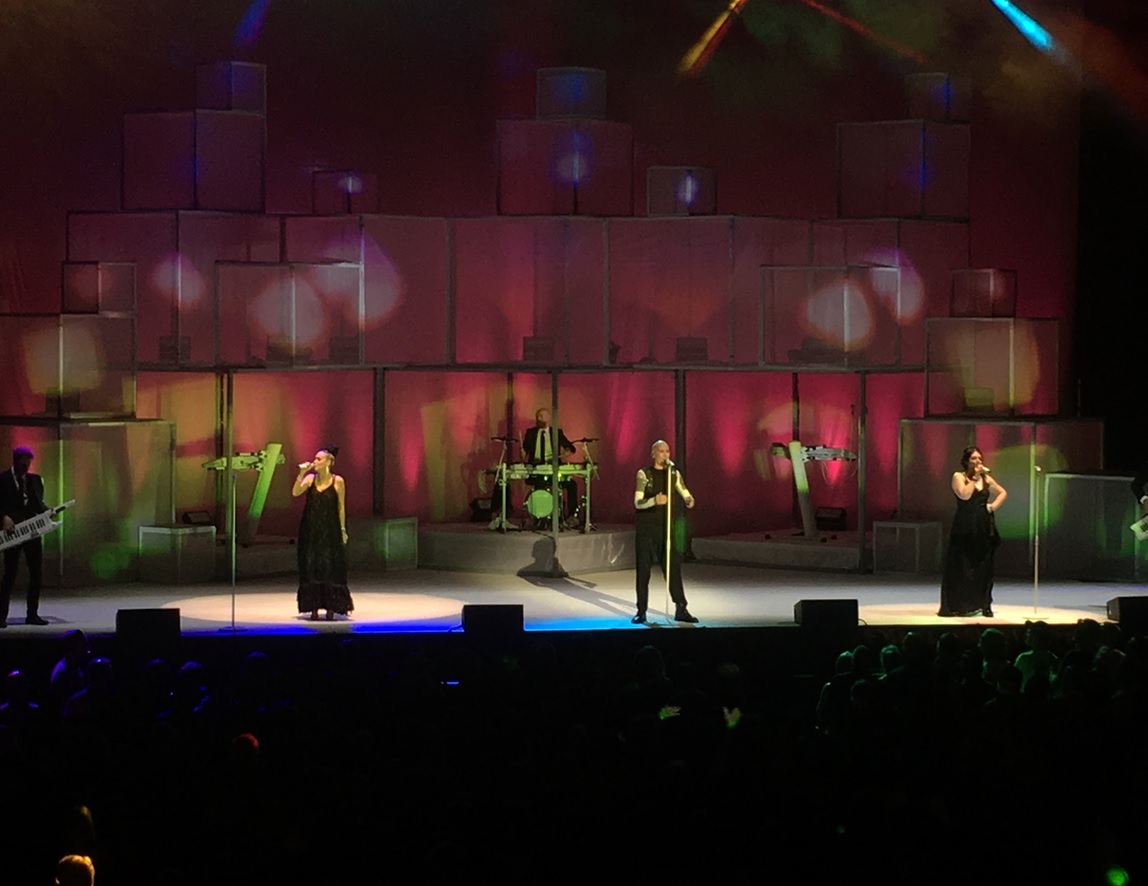 The main surprise tonight was that they performed ‘Behind The Mask’. This track was originally written and recorded by sadly underrated Japanese electronic music band, the Yellow Magic Orchestra in 1978 and 1979. Although my colleague who I was with recognised it from being an Eric Clapton track, which he had covered in 1986. But I suspect others will know the Michael Jackson version that came out after his untimely death.

The other slight surprise was that there is now just one sole survivor from The Human League MkI days and that is ‘Being Boiled’. Other than that is was an enjoyable evening and I would see them live again. 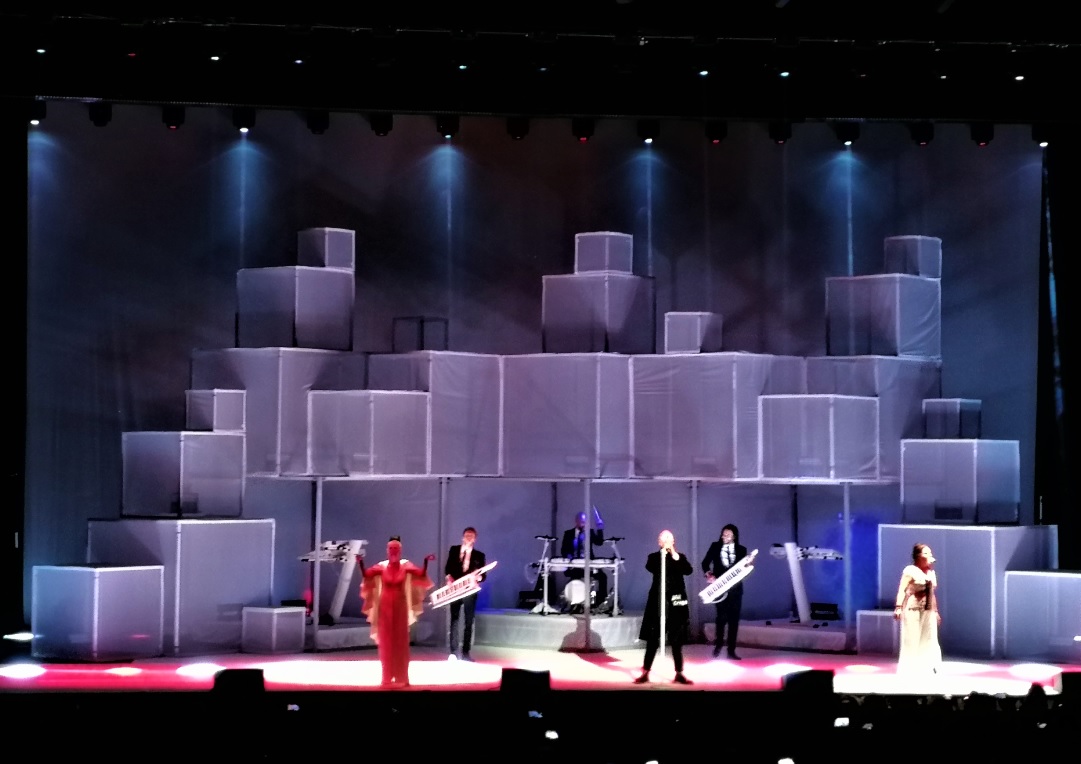 The Human League live at the Brighton Centre in 23.11.18 (pic Nick Linazasoro)

Out of interest, the tracks dropped from the 2016 tour were ‘Sky’, ‘Filling Up With Heaven’, ‘Soundtrack To A Generation’, and ‘Stay With Me Tonight’. 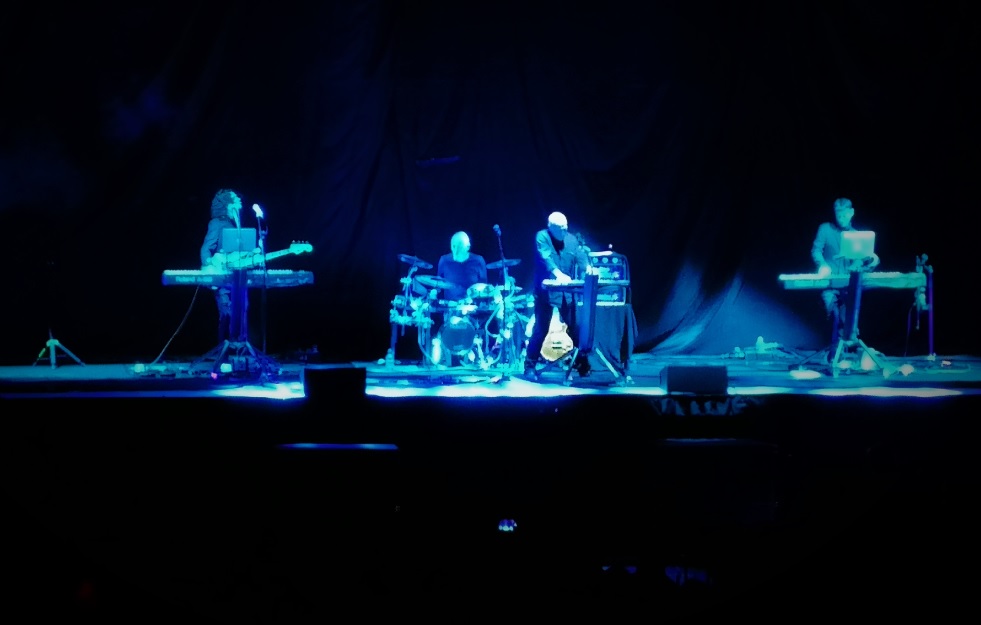 I wasn’t sure what to expect with this, as I have enjoyed the music of Jim ‘Midge’ Ure OBE since the mid 1970’s when he was in the Bay City Rollers-esque outfit Slik. The band had the No.1 tune ‘Forever And Ever’. I knew him in the new wave supergroup Rich Kids too, which was made up of Midge, ex-Sex Pistol Glen Matlock, Steve New (who auditioned and rehearsed with the early Sex Pistols and went onto be a member of Gen X) and future Visage band member Rusty Egan.

Obviously everyone knows Midge as John Foxx’s vocal replacement in Ultravox and for his fantastic work with Bob Geldof KBE for Live Aid, but I suspect I wasn’t the only person wondering how his latest adventure would pan out. 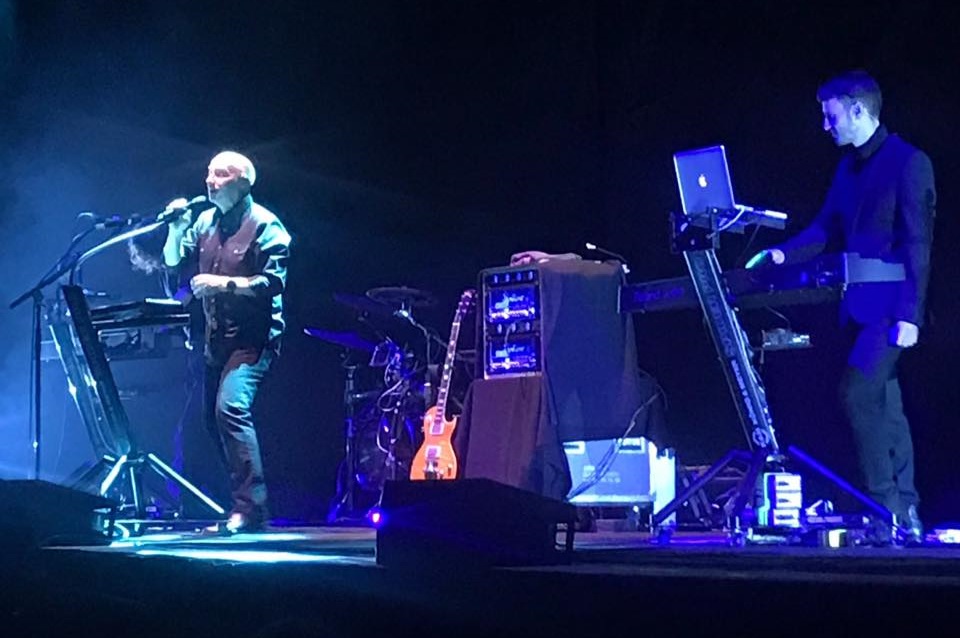 Midge was accompanied on stage by three other musicians and they opened up their brief nine song set with a medley of the theme tune from 1981–1986 for ‘Top of the Pops’ namely ‘Yellow Pearl’ and his 1985 No.1 hit ‘If I Was’.

They went on to perform six Ultravox tunes including the legendary ‘Vienna’, which I thought that he should have ended his set with. But in amongst them was the excellent ‘Fade To Grey’ by Visage, which Midge had been a member of this collective. This was the nearest I was ever going to get to hearing it live now and it was rather good. 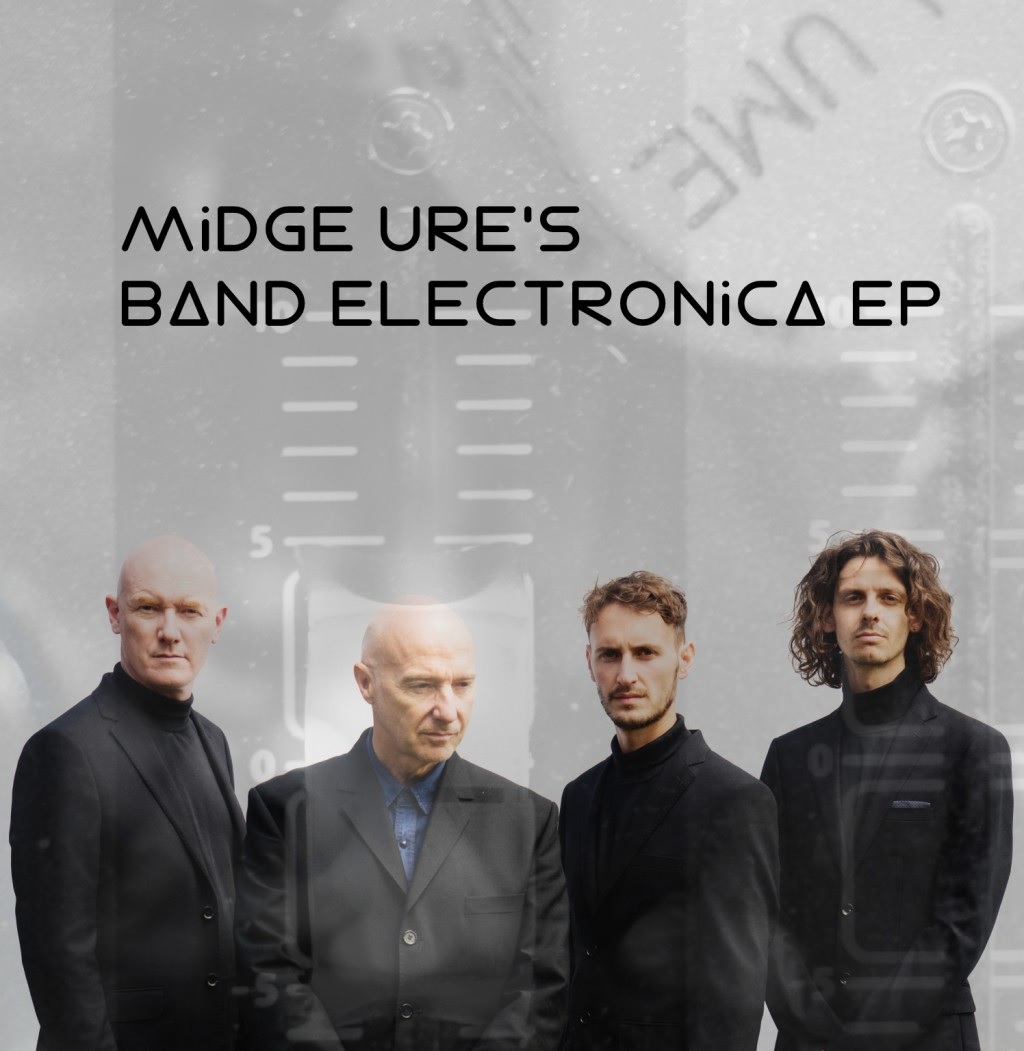 I know that Midge had man-flu this evening and that the crowd were well behind him, but I was just wondering why Midge was doing this, as it had the feel of a covers band to me. 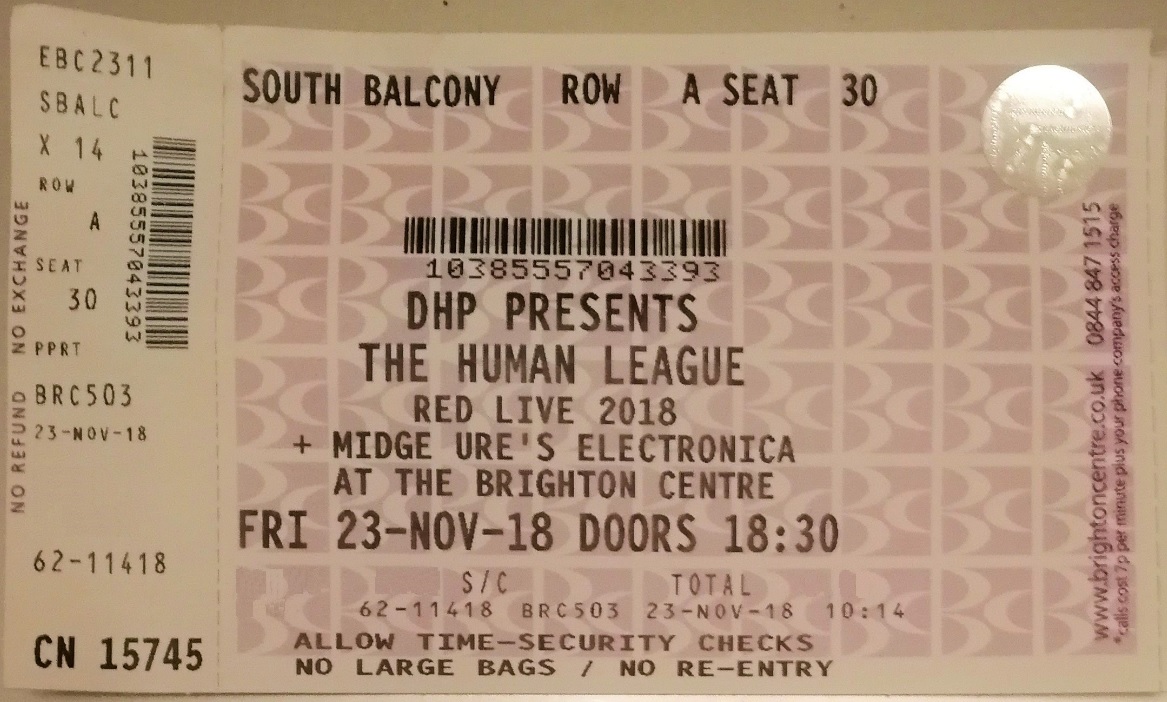 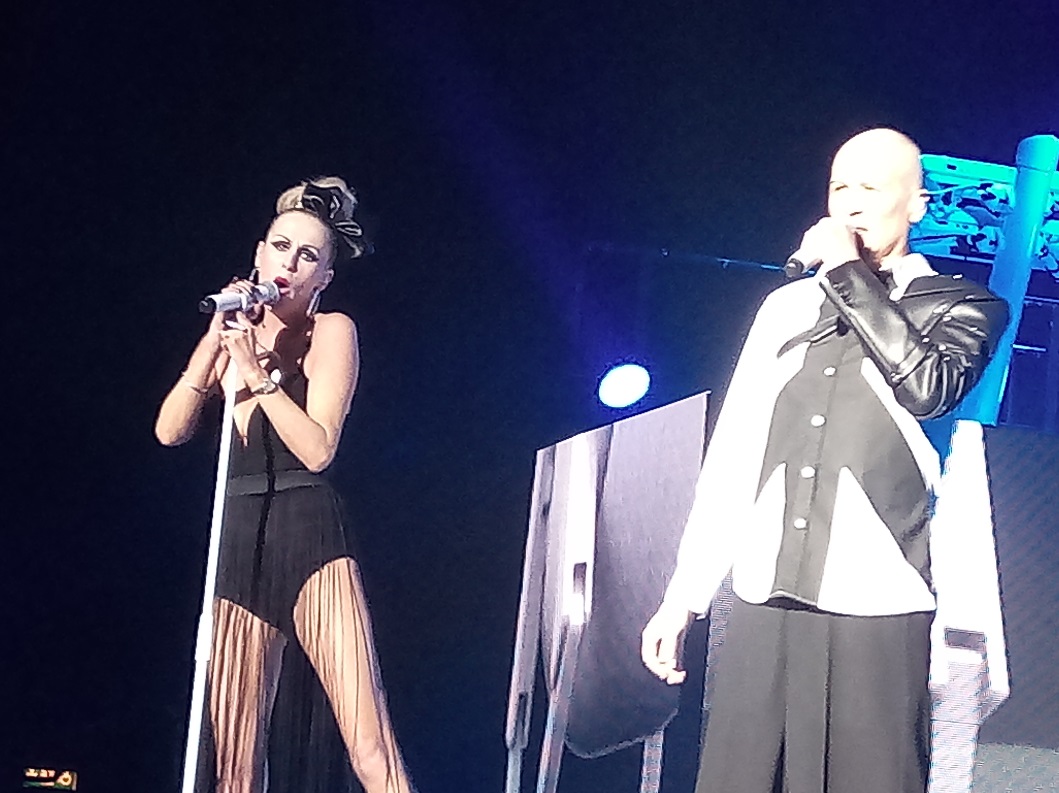 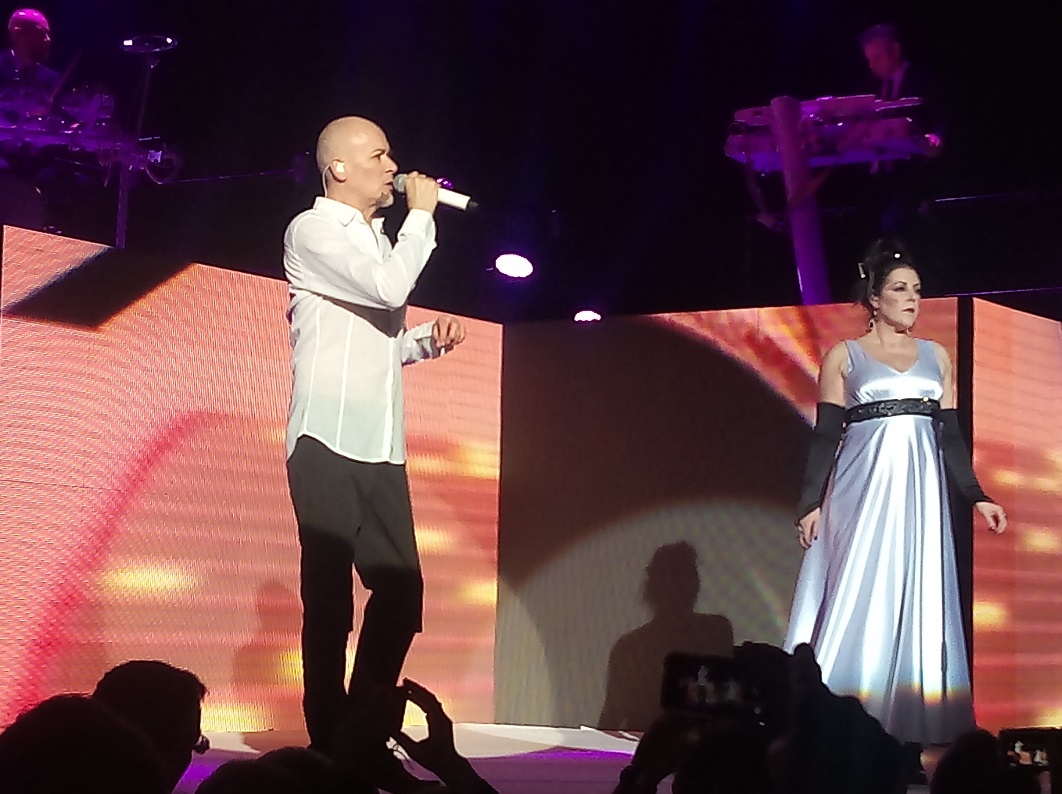 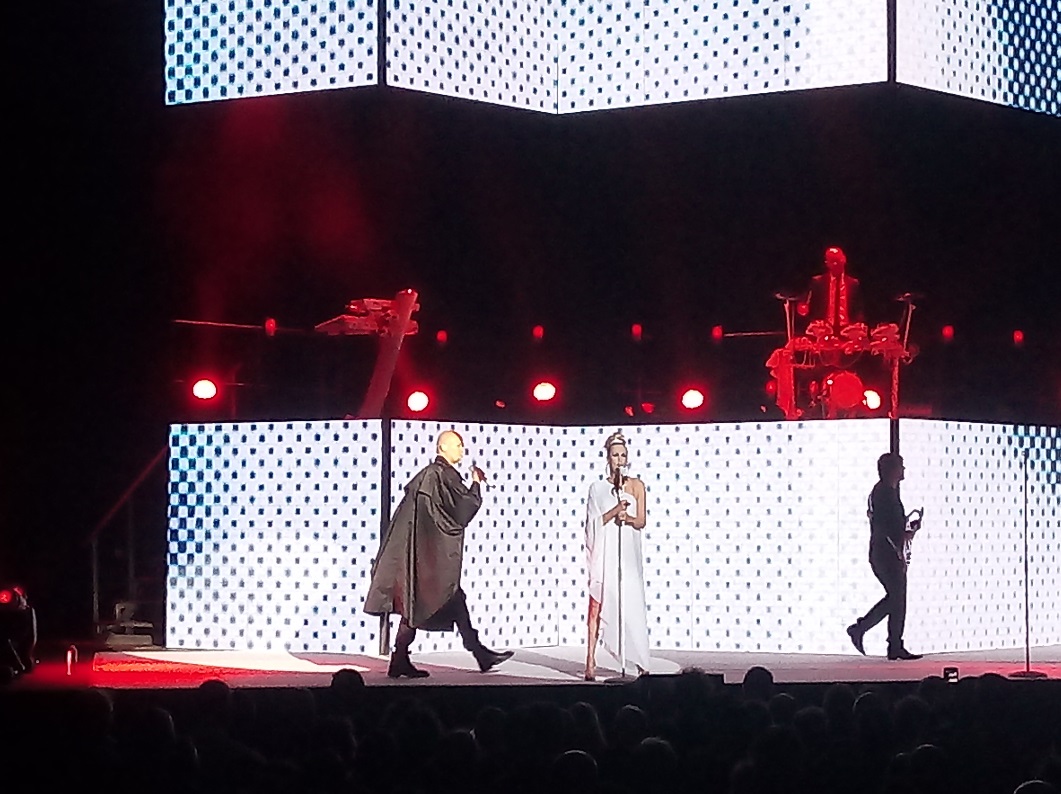 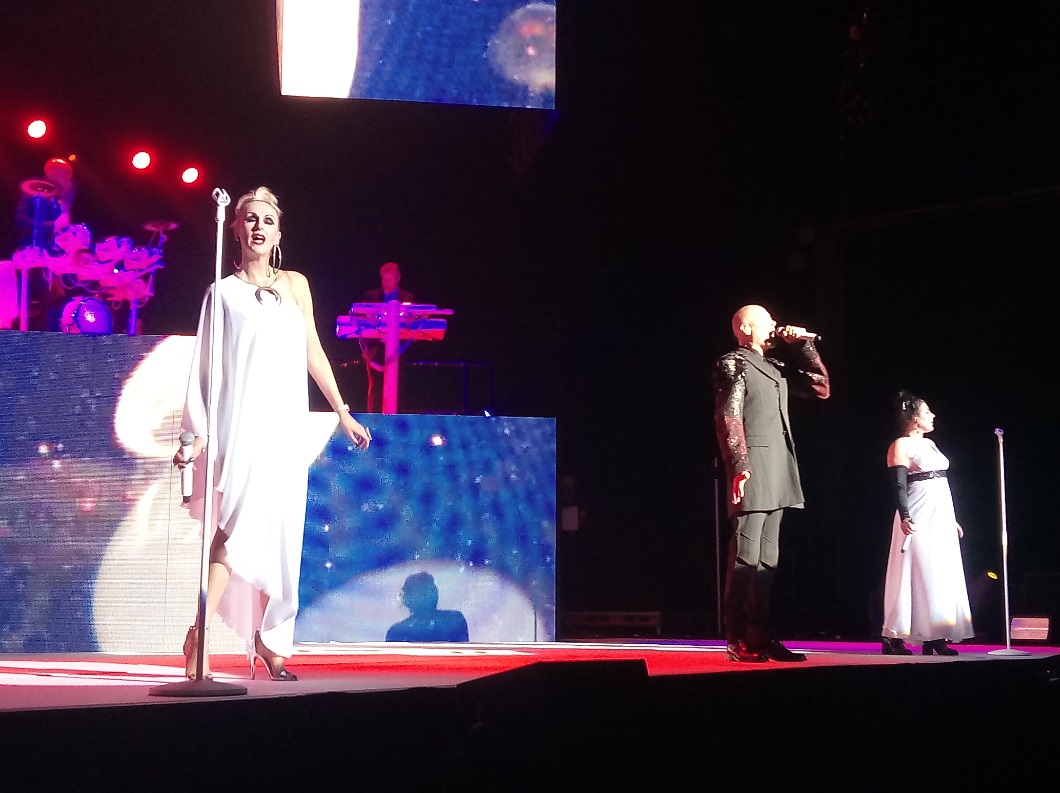 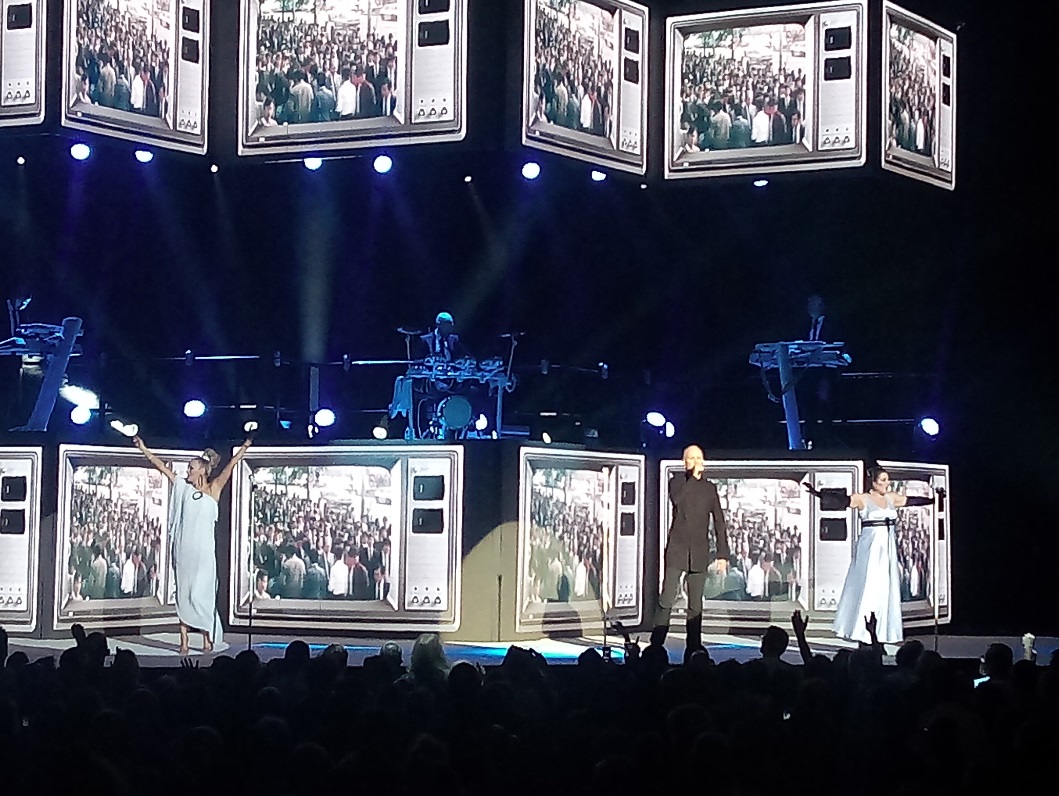 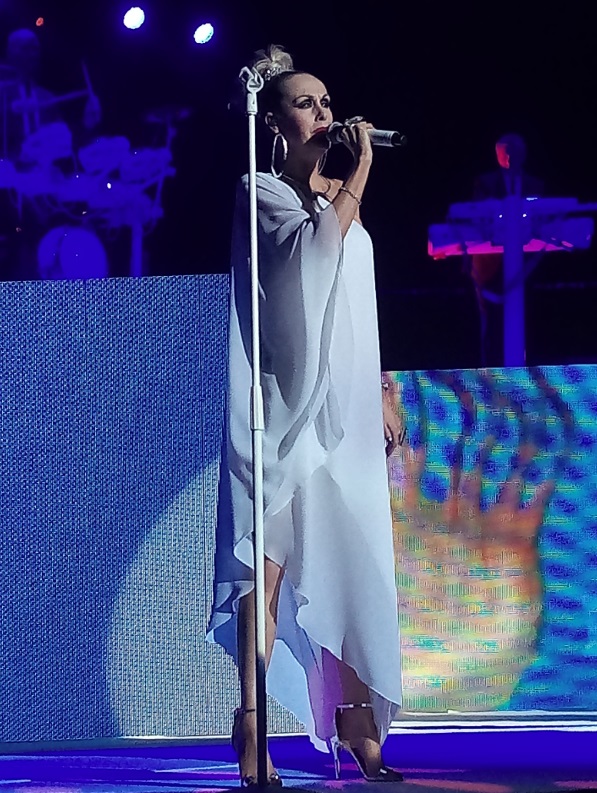 If you enjoy synth music like The Human League, then the chances are that you will also enjoy the bands listed below. Simply click on each of the names and they will take you to our concert reviews on those bands: