Brighton curry restaurants have pleaded with the city council to do more to promote their entry in this year’s Curry Capital of Britain contest. 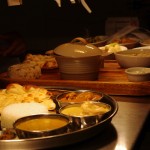 A thali from Indian Summer

Brighton and Hove has been shortlisted in the contest for the second time running, competing against curry strongholds in the north and midlands – and outside London is the only southern town or city in the running.

Indian Summer, Chilli Pickle, Bombay India and Ashoka are representing the city in the contest, and will be rated by a panel of judges ahead of the prize being awarded in October.

But other than one tweet sent yesterday morning from Visit Brighton’s @Love_Brighton account, Brighton and Hove City Council has so far been less than vocal in its support for the bid.

George Shaw, the owner of restaurant PR specialist Avocado Media, which represents Indian Summer said: “The council doesn’t seem to share the same enthusiasm for the awards as other local authorities.

“This is a great shame, because the city has some fabulous Asian restaurants that rival the best in London, which serve fantastic authentic cooking from the region, but with a modern Brighton twist.

“Other cities may have more ethnic restaurants, but they are dominated by “me too” curry houses, where the origins of their chefs tend to lie in just two provincial cities in Pakistan and Bangladesh.

“They tend to serve near identical menus, serving erstaz, fiery and oil laded curries, which the chefs would never dream of serving in their own homes.

“Brighton restaurant owners are pioneering the move away from the fast-food mentality of the curry house industry, toward genuine, subtle, wholesome and healthy – it would be great if the council would get behind them and back the bid.”

BHCC’s chair of economic development and culture, Geoffrey Bowden said: “This is more great news for the city’s eateries which we view as a major part of our year-round visitor attractions.

“The council’s marketing tourism unit, VisitBrighton, is working with the competition organisers on a promotional blog and is tweeting details of the competition to its 18,600+ followers to spread the word and encourage more people to vote for our brilliant curry restaurants.”

The judges can still be influenced by a public vote – to show your support, email vote@fedrest.com