Are Brighton children being labelled bigots over playground taunts?

Children in Brighton and Hove as young as three years old are being labelled bigots, according to a campaign group.

The claims by the Manifesto Club are reported on the front page of the Daily Mail today (Friday 2 January).

The Manifesto Club, which campaigns against the hyper-regulation of everyday life, said that Brighton and Hove schools were filing details of relatively innocuous insults.

As a result, it said, small children were being branded racists, homophobes and bigots. Schools recorded incidents of children using insults such as “doughnut” and “gay”. Even calling a pupil a “girl” was classed as abuse.

Details were being passed on to the schools watchdog Ofsted, the children’s next school and to the local education authority Brighton and Hove City Council.

The Manifesto Club questioned whether this was the most appropriate way to deal with incidents that were often momentary and trivial.

Its findings were collated after a series of requests made under the Freedom of Information Act.

They were published less than a few weeks after an Ofsted report on the Brighton Aldridge Community Academy (BACA) said: “Some students do not take note of the academy’s clear message that using the word ‘gay’ as an insult is not acceptable.” 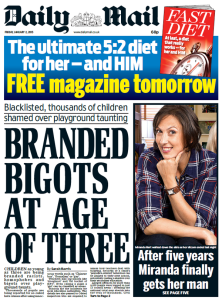 The council said: “Brighton and Hove City Council works closely with all schools in the city to keep children safe from bullying.

“Our city-wide approach enables us to work with schools to address issues and provide support where needed.

“We ask schools to record and share details of bullying by type, without identifying the children or young people involved.

“This helps tackle bullying in the most appropriate way and to develop assemblies or programmes about specific issues if required.

“Recording types and rates of bullying and prejudiced-based incidents is good practice for schools and is data that Ofsted is interested in.

“Responding according to type of bullying provides an effective way to tackle the complex issues.”

Adrian Hart, who analysed the data for the Manifesto Club, said it was “highly likely that thousands of incidents are being logged by schools across the country, regardless of whether their LEAs are requiring them to submit data or not”.

Of the 13 Brighton primary schools he surveyed, five said that they would attach incidents of prejudice-related bullying to the child’s reports submitted to the next school.

The Manifesto Club report said: “Hart issued a follow-up FoI (freedom of information) request to all Brighton primary schools, having identified this as one of the authorities concerned with a broader category of incident reporting.

“This revealed that the local authority has provided schools with a template ‘Bullying and prejudice-based incident report form’ which includes a classification of the incident into ‘ethnicity/race’, ‘appearance’ (hair colour, body shape, clothing), ‘disability/special needs’ (including ‘derogatory language’ such as ‘retard, spaz, geek, nerd’), ‘gender identity’ including ‘someone who does not fit with gender norms or stereotypes’, ‘home circumstances’ such as ‘class background’ (calling another child ‘chav, posh’) or ‘sex’ and ‘sexual orientation’.

“The form requires that the teacher report the location of the incident (bus/canteen/park/classroom), the nature of the bullying involved (‘cyberbullying’, ‘not being spoken to or being excluded’, physical abuse or ‘verbal abuse’ or ‘using language in a derogatory or offensive manner, such as name calling’).

“The form also requires teachers to consider whether the ‘victim’ is ‘especially upset’ or whether the incident has had an ‘impact on the wellbeing of the victim’, in which case the teacher is advised to ‘refer to the neighbourhood schools officer for a full risk assessment’.

“This form is for the school’s files. In addition to maintaining their own records, schools report prejudice-related bullying incidents to the local authority.

The Mail report said that passing records of children’s “prejudice-related” behaviour to their next school could potentially cast a shadow over their secondary education.

It warned that the practice could have serious consequences for any children labelled as bigots.

The Manifesto Club said that alleged offences by more than 4,000 pupils were logged in just 13 council areas, meaning that the national total may stretch into the tens of thousands.

The organisation’s convenor Josie Appleton said: “Particularly worrying is the expansion of incident recording and reporting to ever-greater categories of prejudice, which seem limited only by the strange imagination of education officials.

“One primary school pupil calling another a girl suddenly becomes a sign of gender image prejudice, subjected to recording requirements more thorough than accompanying most burglaries.

“A reality check is urgently required.”