A historian believes Brighton and Hove soldiers may have helped capture Heinrich Himmler as World War Two drew to a close.

Chris Mannion is writing a book about the Nazi commander’s final days, when he was arrested by the Allies, later killing himself by biting into a cyanide capsule.

The commander was captured on May 21, 1945, as he fled the republic in disgrace for attempting to broker a peace settlement behind Hitler’s back. 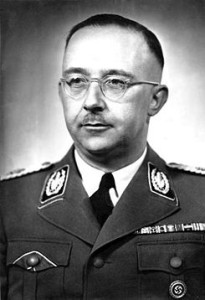 Mr Mannion’s grandfather L/Sgt Patrick Mannion of Newton le Willows was one of five men in the patrol which arrested him.

He has identified two of the others, and believes P Pither and C Drew may be the remaining pair, as they were members of the 196 Battery, 73rd Anti tank, Royal Artillery from which the patrol was made up.

He is appealing for any relatives who may have service records, photographs, family stories or other information to come forward and help him solve the puzzle.

Mr Mannion said: “I know these men P Pither and C Drew were members of the 196 battery, which landed on D-Day and fought through France, Belgium, Holland and Germany. They used these addresses when they signed up.

“I know they were not killed or wounded but little else. So were they one of the other men? Are they in the battery photo?”

“So can we find any living relatives of these men, who may have any information, photos, stories, service records etc?”