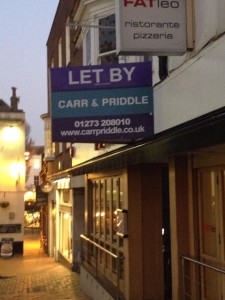 Squatters attempted to take over two empty commercial properties in The Lanes in the early hours of Monday morning.

Brighton police were called out twice to two separate reports of squatters causing a disturbance.

The first was at the empty Fat Leo restaurant in Market Street at 2.14am.

The property has just been let again, and the News understands it is about to undergo a refurbishment.

Windows were smashed and loud music and other noises were heard coming from inside, believed to be a fight.

But when police arrived, everything was in order.

A police spokeswoman said: “Police received a report that squatters had broken into a building in Ship Street Gardens, Brighton, at 3.28am on Monday (9 February).

“When police arrived it was established that a window had been smashed at the building but there were no squatters.”

The Brighton and Hove News understands the owner got them to leave and then drilled doors and windows shut.

The She Said boutique relocated to a new shop in Ship Street last month. 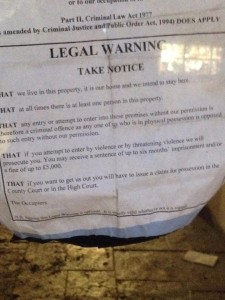 On Monday morning, the squatters were seen inside Fat Leo, and notices had been pinned to the windows warning that anyone entering the squat would be prosecuted, with a maximum penalty of six months in prison and a £5,000 fine.

By this morning, there was no sign of them.

In April last year, police raided a squat in the former Choccywoccydoodah shop in Duke Street after a man was found with head and ear injuries.