The felling of scores of trees on a strip of woodland between Ovingdean and Rottingdean has prompted a campaign to protect it from development. 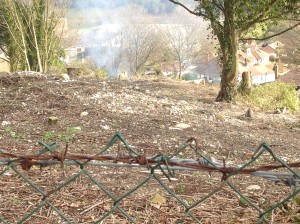 The remains of the woodland in a picture taken last month

People living in Longhill Close, Ovingdean, and Elvin Crescent, Rottingdean, were aghast when loggers moved onto the woods between the two roads armed with chainsaws and diggers.

Now, the former dense woodland is more like a wasteland and residents fear this is just the precursor to more development.

This week, they are petitioning Brighton and Hove City Council to designated the area as inappropriate for development in the City Plan.

And ultimately, they would like the site included in the South Downs National Park.

Resident Sue Brick said: “The land in question has stood undisturbed for decades and forms a natural gap between Rottingdean and Ovingdean, defining the historic boundary between the two villages.

“Its dense green woodland has provided a natural habitat for many birds and wildlife such as jays, woodpeckers, bats, badgers, foxes and squirrels.

“The trees and undergrowth have also played a part in the prevention of landslip and flooding, and any further development in this area would mean increased pressure on sewage, roads, schools, doctors, dentists and air quality.”

As well as felling trees, the workmen lit bonfires to destroy the logs, engulfing nearby homes in smoke. In response, the council issued a notice requiring the fires to stop, but the logging continues. 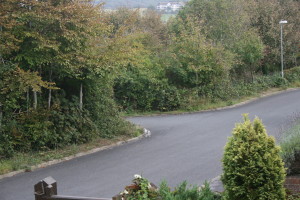 Longhill Close woodland before the work

Brighton Kemptown MP Simon Kirby said: “The city council should be looking at town centre sites, brownfield sites and large sites like Shoreham Harbour long before it even considers sensitive sites like this.

“The land is inappropriate for a range of issues, including the important role it plays in maintaining the distinctive village feel of Ovingdean.”

And the Green Party’s parliamentary candidate Davy Jones said: “As Caroline Lucas MP warned in parliament when the NPPF was being debated, it has given a green light to developers all over the country to press their claims to build on greenfield sites.