The fate of the Rose Hill Tavern will hang in the balance next week when councillors consider an application to turn it into flats. 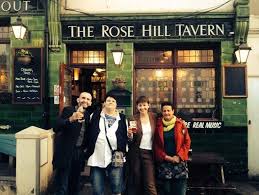 The Rose Hill Tavern with campaigners outside, including Caroline Lucas

Campaigners were celebrating today after they were told an appeal against the 130-year-old pub being listed as an asset of community value (ACV) had been dismissed.

But council officers say this is not enough to stop plans to convert it into housing. Now, it is up to Brighton and Hove’s planning committee to decide whether to accept their recommendation to approve the conversion when they meet next Wednesday, 1 April.

Richard James, Chair of the Rose Hill Tavern Action Group said: “It’s great that an eminent judge has agreed with the council and with us that the pub is an asset of community value.

“The real battle is next Wednesday though, as today’s news will count for nothing if the local elected councillors decide that just because they agreed it has community value as a pub last year, doesn’t mean that they won’t let it be turned into flats later this year.”

The council received 25 objections to the plans from people arguing that the pub is an important part of the city’s heritage.

Ward councillor Pete West added his voice, saying: “As the pub is one of only two properties in the planning authority area which has ACV status it is a matter of considerable community interest and wider city significance and should be determined openly and democratically by members with opportunity for public participation.”

However, neighbours opposite supported the application, saying they endured years of loud music, fights and foul language while the pub was open, and that the campaigners did not come from the immediate neighbourhood.

The council’s heritage team said the loss of the pub was “regrettable” but commended the retention of original features, including its distinctive green tiles.

“The listing of the public house as an ACV by the council reflects the fact that it is valued within the local community.

“The recent listing of the property is considered to be a material planning consideration in this instance and adds some weight to the significance of the property as a valued community asset.

“In addition, the historical use, character and appearance of the building also serves to engender a strong sense of place within the local community.

“It is acknowledged that the public house is a valued community facility that is not directly comparable to other [pubs, cafes and restaurants] within the locality in regards to their historical character and social value.

“It is, of course, furthermore acknowledged that the council as determining authority under the Localism Act considered that the Rose Hill Tavern met the statutory tests under that Act that enabled the building to be listed as an ACV.

“Notwithstanding this, it is not considered that the loss of this use would be of significant detriment to the local population’s ability to meet their day to day needs.”

The pub was closed last May after its owners, Enterprise Inns, sold it to Evenden Estates. The Rose Hill Tavern Action Group applied to designate the pub as an ACV, which means that should the pub or the land be sold in the next five years, the local community can hold up any sale whilst putting their own bid together to buy the building.

Evenden Estates appealed the council’s decision to list the Rose Hill Tavern on the ACV list in August year.

The council rejected that appeal, and Evenden took the matter to the First Tier Tribunal whose Judge Peter Lane heard the different cases in February before making today’s ruling.

The Rose Hill Tavern and the Saltdean Lido are now the only two sites listed as assets of community value.