People living in Hanover have voted by two to one to ask the council to introduce a controlled parking zone after years of resistance. 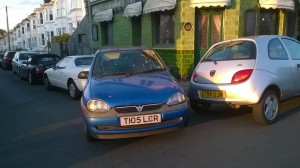 The area known as Muesli Mountain was asked in 2010 if they would like a CPZ, and voted plans down.

But since then, neighbouring areas have got controls and residents are finding themselves competing with more tourists, commuters and second car owners from around the city for space.

Some zoom round the streets to beat others to rare free spaces, vans are parked for months on end, and the area is even said to be used as free parking for Gatwick.

Now, after an unofficial survey found strong support for controls, the local action team is to formally ask for a zone to be created – albeit on its own terms.

Speaking at a meeting of the Hanover and Elm Grove local action team (LAT) this evening, chair Chris Taylor said it would be asking for a unique medium touch scheme from 10-11am, 2-3pm and 7-8pm Monday to Saturday, after council officers had reacted positively to the idea at a preliminary meeting.

He said: “The idea was to survey people in the area because we knew that the council were likely to come back with a proposal of their own.

“When those surveys came back we were a little surprised that they came back with 2:1 in favour.”

“It’s about finding something that suits us and we were really surprised that the council officers responded so favourably.”

The meeting heard that the area was becoming known outside Brighton and Hove as the city’s free car park, even being recommended on Trip Advisor as such.

One resident joked: “It will be a national scandal if it becomes a controlled parking zone.”

Another member of the LAT, David Gibson, added: “This is a one off chance to get all sorts of other improvements at the same time.

“Permits are an income street so in return we should get improvements to the road like cycle racks and one way streets.”

The LAT has surveyed 35 streets, covering most of Hanover and a handful of roads north of Elm Grove and on the Pankhurst Estate.

In Hanover, two thirds were in favour of some sort of parking scheme, although support was more ambivalent in the north of the ward, with many saying they were undecided.

Resident Brian Ravenett raised the issue of loss of parking spaces, saying: “Last time people wanted a CPZ until they found out that in narrow streets there would only be parking on one side of the street.”

However, Chris Taylor said the LAT had calculated how many cars there were in Hanover, and said it was confident even if spaces were lost, there would enough for residents’ cars.

Other possibilities raised by the LAT included floating permits for businesses like garages which needed to park different cars on the roads, 30 minutes free parking outside businesses, and half-price permits for those on council tax benefits.

The team is now set to bring their case to a council committee on July 19. If the council agrees to explore the scheme, designs will be drawn up and put out to consultation.

If Hanover votes yes, the scheme would come into force next summer at the earliest.