A new Brighton market is to be renamed months after it opened after invoking the wrath of locals for getting the name of the area wrong. 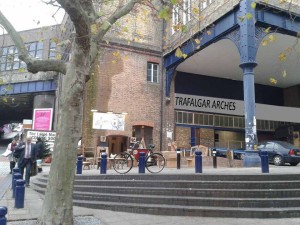 A mock up of how the new Trafalgar Arches will look

The Brighton Laines market in Trafalgar Street in the North Laine made the elementary mistake of making the word laine plural.

This is incorrect as laine refers to the single field the North Laine was built on, rather than the twittens which make up The Lanes to the south (which in turn should never be referred to in the singular).

But following a pedantic outcry, it is taking down the signs and renaming itself Trafalgar Arches market.

“The name was brought to our attention by local businesses that we had called ourselves Brighton Laine when we’re not in the Brighton Lanes.

“We don’t want to upset the locals, we want to be part of the community.

“We put a couple of suggestions on our Twitter page and someone suggested Trafalgar Arches, and we’re happy to go with that.”

The move has been greeted by the North Laine Community Association. Outgoing chair Peter Crowhurst said he was delighted it was changing after having gone down to talk to the market a few weeks ago.

He said: “It’s a mistake which is made a lot and we have lots of shops and traders who don’t understand why it’s wrong.

“This trader has recognised the mistake and has changed the name.

“We are gradually hearing the word South Lanes now which is an abomination. It shows complete disregard for the history of the area.”

The North Laine is one of five large fields which surrounded the old town, others being West Laine where Western Road is now, and Hilly Laine which is now Hanover.

They are believed to have been farmed since mediaeval times until the nineteenth century building boom in Brighton.

Laine and twitten are both Sussex dialect words, the former derived from an Anglo-Saxon word for a legal land holding and the latter meaning alley.