Brighton frozen yogurt firm Lick has beaten its £240,000 crowdfunding target as 250 investors have signed up to support its expansion.

The company plans to use the money to take on more staff, spend more on marketing and start exporting its products.

One of the founders, Owain Williams, said: “We’re so happy to have reached our target with the support of over 200 Lick fans. It was really exciting to see us get over the line in such a burst.

“Thanks to everyone who has invested. We look forward to meeting you all soon.”

In the past few years Lick has supplied supermarkets such as Sainsbury’s and Waitrose as well as the online retailer Ocado and restaurant chain Yo! Sushi.

The number of Sainsbury’s supermarkets sticking Lick tubs has risen from 250 to 325 in the past year as well as 210 Sainsbury’s Local stores. 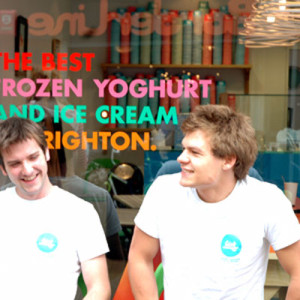 Lick’s founders, Ky Wright and Owain Williams, both 32, are confident that their products will be on the shelves of a growing number of branches over the next few years.

The pair, who are friends from school, started selling their frozen yogurts on the beach in Tenby, south west Wales, when they were 16.

They opened a shop in Gardner Street, in the North Laine area of Brighton, in 2008 but closed it in 2013 to concentrate on their rapidly expanding wholesale business.

They now operate from New England House, in Brighton, and have shifted production to a dairy in Devon.

Sales totalled almost £600,000 last year and are forecast to double this year and in the next two years.

Lick’s optimism is founded partly in the increase in orders from chains such as Sainsbury’s and Waitrose and partly on having an export-friendly soft serve product ready to promote.

Even the domestic market gives an indication of the company’s potential. Lick’s prospectus said: “The UK ice cream market was worth £1.1 billion in 2013, up 7 per cent year on year, and has grown by 25 per cent in the last five years (Mintel Ice Cream and Desserts Market June 2014).

The crowdfunding, on Crowdcube, values Lick at just over £2 million. But the founders’ ambition can be seen in the examples they give of comparable exits and transactions.

And when Innocent first accepted investment in 2009, it was valued at about £160 million. A transaction last year placed its value at about £320 million.

If the boys from Tenby – who tried their luck with Lick in a small Brighton shop – do half as well, they will be able to say that they have their corner of the desserts and ice cream market well and truly Licked!