Brighton Open Air Theatre (B.O.A.T.) has opened its doors tonight for the first time – or it would have done if it had any doors.

The city’s first outdoor theatre has been built on the site of the former bowling green in Dyke Road Park.

It has space for 425 people to sit on grassy terraces in an open-air amphitheatre.

During the weeks before his death of pancreatic cancer in 2013, Mr Bunting drew up plans for the theatre.

He picked the site in Dyke Road Park and left his £18,000 life savings to the project.

Five of his friends carried on the project after his death and hoped to open the theatre in time for last year’s Brighton Fringe. 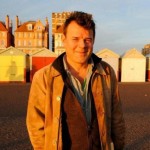 The theatre was given planning permission by Brighton and Hove City Council in October 2014 and work was completed just in time for this year’s festival.

Next week B.O.A.T. will play host to a Globe Theatre touring production of Romeo and Juliet as part of Brighton Festival.

The theatre is seasonal and will be open from May to September each year.

As well as being used as a venue for the Brighton Fringe, Brighton Festival and touring productions, it is intended that it can be used by local schools, colleges and community groups and for film screenings and talks.

It will be open to the public as at space to sit when not being used for performances.