A developer has submitted scaled back plans for new shops and flats on the site of a car showroom in Lewes Road after his original plans were dismissed on appeal. 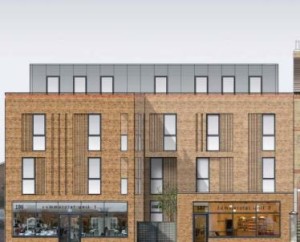 The Portslade developer’s original application was for a four-storey building, but the current plans set back the fourth storey, and half first, second and third storeys further from the road.

The plans, written by LCE Architects and submitted to Brighton and Hove City Council, say: The proposal is to develop a commercial and residential scheme for the site, providing a new injection of quality design and lifting the streetscape of this part of the busy Lewes Road. 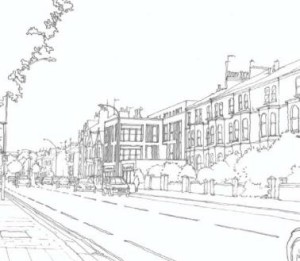 “We hope we are able to demonstrate with this application that we have succesfully addressed the inspectors main issue for dismissal ‘The effect of the proposal on the area’s character and appearance’.

“The proposal retains the current mixed use for the site by demolishing the existing shop, car showroom, office and flats above and replacing them with new retail units and additional flats.”

LCE Architects says these will “give the building a contemporary interpretation of brick detailing thus complementing the traditional rich detailing and visual interest that characterises Gladstone Terrace’s main facade.”

No car parking spaces are given, with new occupiers being given two years’ free membership of City Car Club and a three month bus pass.

The first application, submitted in 2012, was refused in February 2013, and a subsequent appeal dismissed in May last year.

The dismissal of the appeal allows the developer to submit another application without paying a planning fee.

The rest of the Scotts Garage site, which sits behind Lewes Road off St Martin’s Place, is being redeveloped after an appeal against refusal of his plans to build offices and flats was allowed on appeal last year.

The site, originally owned by Ovingdean developer Mark Buckle, was subsequently sold at auction with offers in excess of £400,000 invited.