A Hove author is staging his own production of a rarely-performed Shakespeare play in a bid to help complete his quest to see all the Bard’s plays within one year. 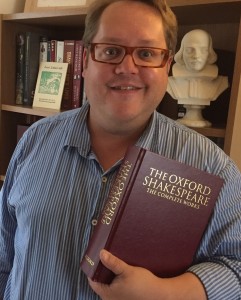 Dan Wilson decided to attempt the feat after being hit by a flash of inspiration on his 37th birthday last October, a challenge which has taken him up and down the country and around Europe.

But with his deadline of October 21 looming he may yet have to shell out for a flight to Canada to see the final play, Pericles – unless he can persuade The Globe to let him sit in on a rehearsal of theirs.

And with absolutely no productions of Henry VIII being staged anywhere in the world in the past 12 months, he has had to persuade a troupe of local actors to do that for him next Sunday, October 18, in Brighton.

Dan said: “I was 37 last October and in the shower on the morning of my birthday I thought what can I do to mark it, what are there 37 of – quick as a flash Shakespeare came into my head and then I ran downstairs in my towel and get out my complete works, and indeed, there are 37 plays. So that was what I set out to do.

“I imagined that it would be quite straightforward and that every Shakespeare play would be performed somewhere, so it was more than a month before I went to see the first, and at the end of the first two months, I’d only seen two plays.

“But I soon realised there are Shakespeare’s greatest hits, then the second tier, and then almost a third division of ones which are never staged. You can see as many Romeo and Juliets, Hamlets and Macbeths as you like, but plays like The Comedy of Errors and all three parts of Henry VI are harder to find.

“It’s really hard to say which production has been my favourite. There hasn’t been any which have been absolutely dreadful. I did expect to see some real dross and I haven’t.

“What I have enjoyed is going to lots of different places and different theatres and seeing how really clever people have taken Shakespeare in hand and made it very contemporary, modern and relevant.

“And my goodness, Shakespeare’s popular. It’s 400 years next year that he died and he’s still performing to packed houses up and down the country and abroad which is astonishing. There’s no comparable talent to that.”

His quest took him to a replica Globe theatre in Rome for The Comedy of Errors, via Verona to see Juliet’s balcony, and to Brussels to see the three Henry VI plays.

He’s also been to Canterbury, York, Cambridge, London, Edinburgh, Stratford-upon-Avon of course, Leicester for Richard III with a visit to the man himself in the cathedral, and Brownsea Island in Poole Harbour for The Tempest.

Productions have ranged from an all-female Titus Andronicus to sixth form students doing Julius Caesar at Lewes Town Hall, as well as lavish Royal Shakespeare Company productions of Much Ado and Love’s Labours Lost in Stratford.

Dan said: “One of the most interesting ones was the Two Gentlemen of Verona at a drama school in Chiswick. That was directed by Trevor Nunn, a fellow completist in that he’s directed 30 Shakespeare plays and before he retires he wants to do them all.”

Plans for a book are in the pipeline, or perhaps a blog, but for the moment, the Pericles problem is the most pressing.

He said: “It’s been quite a journey. But the sticking point is Pericles. I almost saw it in Guildford, but I got the wrong venue and ended up at Faure’s Requiem instead.

“The absolute last-ditch option is that it’s currently playing in Toronto, but I haven’t quite decided what to do.

“It’s also playing at the Globe, but after my birthday. I have written a begging letter asking if I can go to a preview or a rehearsal as I would save a lot of money. I’m willing to go to Canada if it has to be, it would be very disappointing to only do 36 and miss it.”

Next Sunday’s production of Henry VIII at the Nightingale Room above Grand Central by Brighton Station is a rehearsed reading by a cast from DAFT, Droll and Folly Theatre, directed by Nicholas Quirke. Tickets can be booked here.